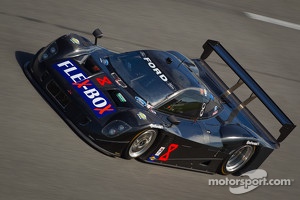 The Starworks team is now set to repeat its qualifying performance of 2012, when Ryan laid down an impressive 1min 41.119 to take pole at the Florida track and looks to also take home that elusive winner’s trophy.

Ivan Bellarosa, 2012 Speed EuroSeries champion: “I am very excited to race for the Starworks team at the ‘Rolex 24 At Daytona’. Winning the SPEED EuroSeries in our own manufactured Wolf CN Prototype was one of the highlights of my career, which was just escalated to another level by winning the Sunoco Daytona Challenge and the prize drive with the Starworks Motorsport team.

“Sunoco and GRAND-AM have been fantastic in providing seven days pre race testing leading up to the race. I feel confident with the driver line up in the team that we will be able to challenge for a podium finish and I can't wait to race against some of the best sports car racers in the world in one of the hardest 24 hour races at the famous Daytona International Speedway.”

Jan Charouz, who competed in the 2012 24 Hours of Le Mans with the British ADR-Delta Team: “I am really looking forward to the race; it will be my first time doing the race in a DP. I am also proud to be part of such a great team as Starworks and would like to thank them for this opportunity. The car is prepared very well, and I am sure we can fight for a good result with our driver line up.”

Peter Baron, Team Owner of the Fort Lauderdale based squad, adds: “I’m really excited to see the #8 car drivers in the race. We have a line up that is under the radar compared to some others, but should be in prime contention come Sunday afternoon. It’s always rewarding to bring in new drivers from other series and get them a taste of Daytona Prototype racing.

“The team is pleased to have Scott back for his 3rd Daytona 24 with Starworks. Last year we had a good run with his car leading a considerable amount of the race until we had an axle failure. I was quite thrilled to receive the Sunoco Challenge winner Ivan, who has done a lot of testing and is showing great promise. Gaetano joined us for our last win of 2012 at the 6 Hours of Bogota and has done extensive testing and should be up to the challenge. We competed against Jan and Brendon in WEC last year and they were our two top picks to fill out the last spots for Daytona. Last year, Jan set numerous fastest laps, including at Le Mans, and has competed in the French classic 24-hour since 2007. I assisted the Murphy Prototype team at Petite Le Mans last year which included Brendon in its line-up. When I saw him in action, I knew we had to get him in our car as quick as possible!”