STARWORKS’ SENSATIONAL SECOND IN THE ROLEX 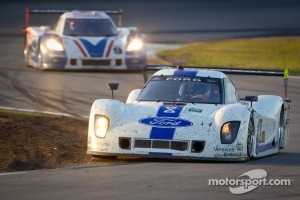 THE PLOT: Starworks Motorsport produced a stunning second place in the 50th running of the Grand-Am Rolex Daytona 24.

The Fort Lauderdale-based team turned up a sensational effort against the odds to make the second step of the podium in Florida.

They finished just 5.1 seconds behind Michael Shank Racing. But they had been in the running for a magnificent win for most of the 24 hours.

After epic stints from Allan McNish and Venezuelans Enzo Potolicchio and Alex Popow, the team changed the strategy at the 22-hour mark. While their rivals kept their drivers in the car, Starworks put in Lucas Luhr so that Ryan Dalziel would be kept fresh for the final charge. He gave it everything, but eventually the team had to settle for second.

THE QUOTES: Team owner Peter Baron: “It is an immense bitter-sweet feeling. We got a car two weeks ago and it was almost a build up from scratch. The team did an awesome job, fielding two cars that ran perfectly. The #2 car had a driveshaft failure that wasn’t their fault and the new car did not have one installation fault. It ran like clockwork.

“I have never been so confident midway through a race, thinking this is ours – but I guess it wasn’t.”

Ryan Dalziel, Orlando – originally from Lanarkshire in Scotland: “It is disappointing. I would be lying if I said I wasn’t disappointed. We were the car to beat and it was nice to lead so many laps, but leading so many laps sometimes makes it feel worse when you don’t take the checkered flag.

“On the plus side, it was an amazing race and the perfect way to mark the 50th running for Daytona. Starworks did an awesome job. Peter put together an amazing crew and we will now focus on the rest of the year.”

Enzo Potolicchio, Venezuela: “We have all worked really hard since the end of last season. We hired the right people, so you can see how the team has grown. We are really proud of all the people Peter has put together. It is amazing how it has all come together. And I am delighted to have Ryan as a team-mate.

“Ryan is also my coach. Last year was our first year in DPs and we learned a lot about driving these difficult cars. But with all the work we have done in the off-season, we can show others now we are one of the teams to beat.”

Alex Popow, Venezuela: “I did a good job. Enzo and I were doing good lap times. We can go out there and hang with the other guys, but we didn’t have the experience to fight at the end and we didn’t want to risk it. It is the 50th running of the Daytona 24 and we wanted to win.

“We have done such a good job – not just for this race, but since last year. It is a big turnaround for Starworks. We have a two-car team and that will last all season. We are going to fight for the championship. Last year we were rookies, this year we are saying we can try for the championship and we are going for it.”

Lucas Luhr, Germany: “I really had to push hard in the final stint. I knew I was only doing a single stint because our strategy was to put Ryan in at the end against drivers who had been in a long time. The car was solid and I just pushed as hard as I could.”

Allan McNish, Dumfries, Scotland: “It is never smooth in 24-hour racing. The important thing is to stay in there fighting and wait on it coming back to you. The car ran very well, without any mechanical issues. It has been fast. I never thought it would be fun because it is a job and these Daytona Prototype cars are so different from what I am used to.