Starworks Motorsport doubles at The Glen

The first-place car completed 91 laps around the 2.45-mile road course at an average speed of 111.356 miles per hour.

Finishing first was the talented duo of Ryan Dalziel and Lucas Luhr and seconds behind them was the team car of IndyCar star Sebastien Bourdais and Alex Popow.

I am a little bit relieved as on Sunday night both of us were fired and re-hired.

Their victory came days after the team nearly skipped the race due to their frustration with the outcome of the Brickyard Grand Prix at the Indianapolis Motor Speedway.

“I am a little bit relieved as on Sunday night both of us were fired and re-hired,” Dalziel said. “By Wednesday morning, Lucas and I knew what we were doing for this race. At Indy, we felt we could have had a one-two (finish) after a couple of seasons of knocking on the door of a double-podium. But this is not just a one-two finish but a dominating performance. The guys did an unbelievable job.”

Added Luhr, “It has been an exciting week for me. This is the first time we tried to match the set-ups on the two cars, and it worked. I have no chance for the championship, so I am here to help Ryan (Dalziel) and to help the team. To have a finish like this, we all can be happy. It is a victory for the whole Starworks team and it is well deserved.”

Dalziel had built up a commanding lead until a late-race caution wiped out his 10 second advantage. But when the green flag dropped with four minutes to go, Dalziel immediately pulled away with Bourdais tucked in behind him and holding off a charge by championship driver Scott Pruett.

Team owner Peter Baron was ecstatic with the outcome, calling it one of his team’s best races ever. “This victory is one of the most enjoyable ones because we came off something bad. The hardest thing about racing two cars often one car has a bad day and the other a good day, but both cars had a good day and we are back in the championship hunt. This one is probably the happiest emotionally for me. LeMans was very emotional, too, but this one is special.”

“It was a very exciting afternoon for me,” Popow said. “I am learning more every time I come to the track, and I am learning a lot from Sebastien. My race was a good one, and I enjoyed rubbing fenders with Memo (Rojas). And I got to put the car in first place. For me, the championship will be hard, but it will be a good fight.” 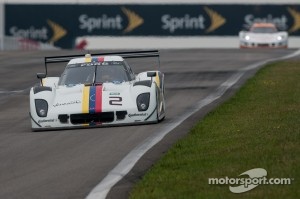 Added Bourdais, “My hat is off to Lucas and Ryan. It was a great team effort. Both cars were identical set-up wise and it really showed. This track is a tough place to pass, so every time you can you try to get to the front. And I am happy to salvage second place.”

In GT action, the Turner Motorsport BMW M3 of Bill Auberlen and Paul Dalla Lana took the win, finishing less than a second ahead of the Marsh Racing Corvette of fast-qualifier Boris Said and Eric Curran.

“It is a fantastic feeling, as we were one step away from the top of the podium,” Dalla Lana said. “The start was crazy with lots of spinning going on, which set our course for the day. My hat is off to the team.” 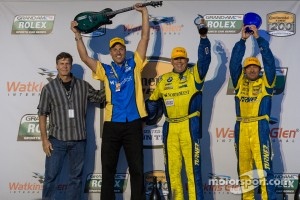 Stated Auberlen, the closer, “We had a great car in the rain but not in the dry, so our engineer made a number of changes. Today, our car was perfect and was better than it has ever been. And when the championship leader and second place take each other out on the first lap, my jaw dropped and we took advantage of it.”

Three caution flags slowed the race for 14 laps with two crashes being hard ones without injuries. Numerous other incidents dotted the fray and the intensity of the action was non-stop.

The Rolex Series travels to Montreal for a race next weekend.