Second new track record of the season for Edwards

Lexington, Ohio (14 June 2013) – After putting some great team work to use on the way to claiming their third consecutive win of the season at Detroit two weeks ago, Stevenson Motorsports is hoping to make it four in a row on Saturday as the GRAND-AM Rolex Sports Car Series stages Round 6 of the championship at Mid-Ohio Sports Car Course. Stevenson Motorsports continued to show its strength on Friday as John Edwards set a new track record to start the 2.75-hour Diamond Cellar Classic event from the pole.

The result marked Edwards second pole of the season and also the second time he’s broken a track record this year - having also done so at Barber Motorsports Park. Edwards, who will share the No. 57 Camaro with Robin Liddell, wheeled the Camaro around the 2.258-mile Ohio road course to set a fast time of 1:22.957-seconds – taking the pole position by .288-seconds over the No. 31 Corvette. 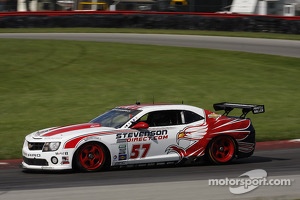 “We’ve have a great run of races,” said Edwards. “I think that in the past few events we ended up with the win when we ultimately didn’t have the fastest car as a result of some strategies or some pit stops that put us into the lead and into a position to defend, but I think here we actually have a better car and are set up better speed wise to really have a shot to race for the win rather than just defend for the win. So I’m optimistic for tomorrow but I know it’s not going to be an easy fight. We know the Ferraris are due for a win and I expect them to be there – especially over the long stints tomorrow.”

The 2013 Rolex Series season opened with two disappointing race results for the Stevenson Motorsports squad, but the team has rebounded in the subsequent races and dominated each race to win three in a row. Those results have propelled the team to second in the championship standings.

“I think a lot of it is we’ve just been a team that has been together for a really long time,” said team manager Mike Johnson of the team’s recent success. “Michael Hoffman, Robin (Liddell) and myself have been together for seven years now. John (Edwards) has been here a few years and we’ve been with Pratt & Miller for a few years. It’s easy when you come to the race weekend and everybody knows what they’re supposed to do, everybody does their job and there is just no drama. There are no mistakes, no errors. We roll off the truck with a fast car, the car is good, and it makes it so you can really concentrate on making the car goes fast. The last three wins haven’t been all on speed, they’ve been on strategy and great driving and awesome reliability. I’m sure there are some teams upset with the performance that we’ve had but people forget that we started the first two races with two DNF’s so we’re just enjoying the happiness while it’s here!”

It was a busy day for the Stevenson Motorsports group as the team also saw official practice and qualifying for the Continental Tire Sports Car Challenge Series with qualifying for the No. 9 Camaro GS.R machine taking place immediately prior to the Rolex Series GT qualifying session.

Matt Bell, who finished fifth co-driving with Edwards in last year’s Mid-Ohio event, will start the 2.5-hour Continental Tire race from the fourth row after posting a time of 1:31.268-seconds - less than a second off the pole time. He will open the race before handing over the Camaro to Edwards who will take it to the finish.

“We’ve been struggling with the car all weekend,” said Bell of the qualifying run. “We can’t figure out how to make it work and it’s one of those frustrating things because the car is balanced. We made some changes between the practice session and qualifying and made some changes before that, but we could never quite get it to work as we wanted. We took kind of a big chunk out of it before qualifying and honestly the car wasn’t that bad. We’ll have to talk to Ryan, the engineer, and see if there is anything we can do to kind of calm that down a bit or look at data and see exactly what was happening. He is a pretty smart guy, so I’m sure we’ll figure out what we need to do and go after it in the race.”