Edwards to co-drive No. 42 Mazda

Team Sahlen, in partnership with Mazda Motorsports, is excited to announce that MAZDASPEED Development Driver John Edwards will be joining the team in the Grand-Am ROLEX Sports Car Series presented by Crown Royal Cask No. 16.

John Edwards shares his thoughts – “I'm looking forward to joining Team Sahlen! It is great to see all that they have done in motorsports, especially in promoting the Sahlen 6 Hours at the Glen along with fielding multiple Mazda RX-8's in the GT field. Team Sahlen is very fan-oriented, so I am excited to get on board. I am also looking forward to being back in Mazda in GT competition after spending all of last season in the #68 RX-8!” 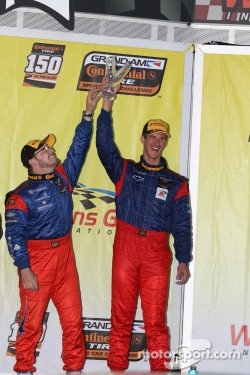 While attending the 24 Hour of LeMans, John Doonan was able to share his thoughts “When we established the Mazda Motorsports Driver Development Career Ladder program in 2007, it was out intent to help young driving talent grow through motorsports based on their talent and positive attitudes. There have been over two dozen drivers who have directly benefited from a Mazda support over the last four years. Some of these drivers have landed in full time, paid rides in a variety of series in North America or Internationally.” He further continued by sharing,“John Edwards, while starting mostly in the open wheel side of the ladder, has found a great niche in driving top level sports cars for Mazda and even for other makes. Selfishly we love to see our ladder drivers stay in the Mazda family…and we are grateful the Team Sahlen’s group has found a place for John for the remainder of the 2011 season. Team Sahlen’s has been doing a great job in the Grand Am ROLEX GT Series and we hope John can be a part of that growth.”

“We are very excited to have John on board with us. He showed outstanding speed and race craft in 2010 when he drove the #68 SpeedSource Mazda RX-8. He had several podiums, and won at Lime Rock Park, enroute to finishing in 6th in the Driver’s Championship. And on top of his current Continental Tire Series GS program in 2011, he has had 2 ROLEX GT races starts in RX-8s. So he should be in excellent position to be able to jump right in and mix it up with the very best drivers in the GT field. I know that with John and Wayne together, we should be able to continue our quest to rise to the front of the GT grid.” Shared Team Sahlen Driver Will Nonnamaker

Added Team Sahlen principal Joe Sahlen - “Team Sahlen is very committed to continuing to assist Mazda in their Motorsports endeavors. Part of that commitment is in being of assistance to Mazda in retaining the ROLEX GT Manufacturer’s Crown. Additionally, we want to strive to provide opportunities for MAZDASPEED Development Drivers to continue to rise up the Professional Racing Ranks. The great part is that with John Edwards on board, those two goals can be achieved all at once.”

“I am excited to be driving with John. What is not to like; He is a fellow Buckeye, so it’s great to have another fellow Ohioan on the team. He has a wealth of experience with the Mazda RX-8, in addition to years of set up experience with Open wheel racers. And I am sure that will be valuable as the team, including our Lead Engineer, Catherine Crawford Wallace, work to get the most out of the RX-8.” – infused Team Sahlen Driver Wayne Nonnamaker

“The crew and I are excited to have a John co-piloting the Sahlen’s #42 Mazda RX-8 with Wayne. John has shown his capabilities in a RX-8 via his stints behind the wheel of the with SpeedSource. This will be a great opportunity for Team Sahlen.” – shared Team Manager Jay Chapman

Currently Team Sahlen is in 9th place in the Team Championship. Additionally, driver Wayne Nonnamaker is leading the GT class Bob Akin Sportsman. At the most recent Sahlen’s 6 Hours of the Glen, Team Sahlen qualified in 4th place in GT, led with both their #42 and #49 RX-8s, and completed their third 7th place finish of the year.

For the upcoming Road America race, Team Sahlen will be entering the #42 Mazda for John Edwards and Wayne Nonnamaker. Additionally Joe and his eldest son Will will be entered in the #43 Mazda.