After over 8 years of trying, Team Sahlen has achieved that long awaited victory in the ROLEX GT class. And to put a punctuation on the victory, the team accomplished this feat at Mazda’s home track of Mazda Raceway – Laguna Seca. 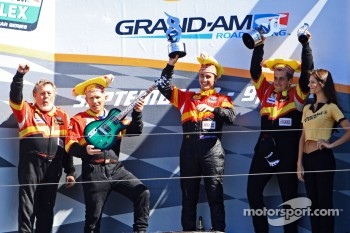 The weekend started off with Team Sahlen doing their usual diligent work during test day to find the optimal set up balance for the undulating Monterrey, California based circuit. This effort was rewarded as practice day started with a Tops on the time chart during Practice Session #3. In Qualifying, Team Sahlen lined up 8th, 15th and 17th on the grid. A comfortable to be in, but nothing to foretell what was to come on race day.

“I was happy, but far from satisfied with the Qualifying position we were in for the race. Last year we were on the outside of the front row, so to have sunk back to 8th on the grid was a bit disconcerting, even if that placed us a the top Mazda on the grid.” - Shared #43 qualifier Wayne Nonnamaker

At the start of the race, all three Team Sahlen Mazdas (#43, #42 & #49) survived the early lap chaos to survive to the 1st yellow at 20 minutes into the race. At this early point in the race, the #43 that was positioned 5th in class stayed out rising up to 4th after the pit stops. The #42 & #49 both pitted to strategize on a topped off tank, while those ahead would be dealing with pitting earlier then.

Another yellow soon followed at the 45 minute mark. At this time, the #43 pitted, and Dane Cameron jumped into finish the race. #49 also made a return visit to the pits to have Will Nonnamaker relieve Joe Sahlen in the middle stint of the race.

As the race continued forward, the #43 Team Sahlen Mazda kept plugging along, surpassing one GT competitor after another. Then all of a sudden, Dane Cameron found himself in the lead. Also discovering that Dane was in the lead was the SPEED TV cameras, that focused upon the RX-8 as it streaked around the twisty circuit for many profile sequences during the 2nd have of the telecast.

Then as fuel strategy and pit stops unfolded, the lead in GT bounced back and forth, until eventually all stops were completed. At that point, the #43 Team Sahlen was out in front, not to be eclipsed in the run to the checkered flag. Victory at last in the GT class by Team Sahlen. After 8 years of trying to secure a Rolex GT class victory it had finally arrived. The team had secured victories before in ROLEX in the SGS class. And the team has secured many a victory in the Grand American Continental Tire Series GS and ST classes, where they are the winningest team in said series. But now the GT victory has been secured, and at Mazda’s home track no less.

For Northern California raised Dane Cameron, words were hard to come by when interviewed on SPEEDTV and on the podium. After letting the moment sink in, he found the words to share his emotions on the moment at hand - “Mazda Raceway was an incredible weekend. Our Sahen's Mazda has been handling great lately so I had high hopes that we would competitive but I never imagined the race playing out how it did. To win in Grand-Am everything has to go just right, and finally it did for us. I can't even describe how proud of the entire Sahlen's team I am, everyone works so hard and always gives there all and we have been so close so many times but something always happened. But not this time! Everything just went perfectly, the strategy from Katie, Wayne's opening stint, our pit stops and the race stayed green thankfully! I would have been very disappointed to leave GT without winning a race so this feels great and I can't thank everyone enough for their hard work and support.”

Perseverance and Dedication are 2 words that epitomize Joe Sahlen’s quest for this GT Victory – “I am very proud of the accomplishment that everyone at Team Sahlen has been able to achieve with this result. There were tough times over the years to reach this hurdle. It is a fantastic feeling and a great closing chapter to our time in GT before we transition into Daytona Prototypes in 2013.

Both the #42 & #49 were involved in minor skirmishes during the 2 hour and 45 minute event. None of these were major enough to deter either from finishing the event. At the end of the event, both placed in the Money, in 14th and 15th positions.

A look at the standings sees Team Sahlen’s #42 & #43 firmly in the Top Ten in GT Team Points. Additionally, Drivers Dane Cameron and Wayne Nonnamaker have risen up to 6th in the Driver Standings, with still a strong opportunity to reach 4th overall at the conclusion of the year.

There is now only 1 event remaining on the 2012 Grand American ROLEX schedule. This event will be at Lime Rock Park. The 2 hour and 45 minute event will be held on September 29th and will be telecast live on SPEED TV at 3 pm ET.

An unexpected finish for Carter and Plumb's BMW at Laguna Seca