Joe Varde is having a great time watching his race car, the No. 13 Porsche earn victories and points this season in the Continental Tire Sports Car Challenge

From the showroom to the racetrack, the thrilling Continental Tire Sports Car Challenge features cars similar to those on the street.

Joe Varde enjoyed driving his new Porsche 997 on the streets of Central Florida last year. He’s having even more fun now, though, watching it win races this season in the Continental Tire Sports Car Challenge. 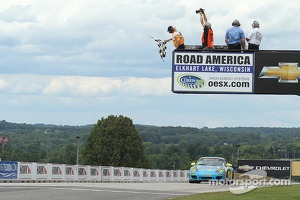 Varde bought that Porsche from a dealership, ran it on the highway for several hundred miles, and then converted it into a race car at the Rum Bum Racing shop in Orlando. That same car – now the No. 13 Porsche – won three races this season at the hands of Nick Longhi and Matt Plumb, who are leading the Grand Sport (GS) point standings entering Saturday’s race at Kansas Speedway.

“It takes about eight weeks to take a car from the showroom and get it ready for racing if you work real hard,” Varde said. “I started out driving our race car on the street. We also get all our spare parts from the dealership. The only basic changes are adding the roll cage and some safety equipment.”

That’s the beauty of the Continental Tire Sports Car Challenge. Fans are still talking about last weekend’s CTSCC race at Road America, where both the GS and Street Tuner (ST) classes came down to the final two minutes following a final green-flag run of longer than one hour.

That race was won by Varde’s former daily driver over an Aston Martin Vantage and a Nissan 370Z. If those cars are a little rich for your blood, the ST class features VWs, Honda Civics, Mazdas, Nissans and BMWs.

“I can’t tell you how many times people come up to me during our fan walks and comment how close our cars are to the ones that they drive,” said Jesse Combs, who leads the ST standings in the No. 56 RACE EPIC/Murillo BMW 328i. “Our races have so many different cars, people can find ones that they relate to,” added his co-driver, Jeff Mosing.

This series is great for the fans, and also for the teams and drivers – who use it as a stepping stone to the GRAND-AM Rolex Sports Car Series or American Le Mans Series presented by Tequila Patrón. The series will continue as the top rung of the development ladder for United SportsCar Racing when it debuts in 2014 – FOX Sports recently signed to televise all of the CTSCC races for the next five seasons.

Both Mosing and fellow ST regular Andrew Carbonell got their first taste of Rolex Series competition this year at the Rolex 24 At Daytona. They did well enough in their audition that they were called back for encores – with Mosing winning the GX class at his home race in Austin, Texas., while Carbonell won in that class at Road Atlanta.

Racing in the series can be habit forming. Jack Roush Jr., a former karter, got his first opportunity to run in the series with Rehagen Racing in 2006. He’s been a regular ever since, running the Roush Performance team with the No. 61 Gary Yeoman’s Dealership Ford Mustang Boss 302R. While he would like to step up to United SportsCar Racing if the right opportunity comes along, he’s happy where driving in the CTSCC.

“I love the format of the series, driving production cars on road courses,” Roush said. “It’s both challenging and competitive. This racing is a blast. It’s a challenge, both driving and setting up the car, and a great opportunity to learn.”

Roush’s teammate, Billy Johnson, is an example of working his way up the ladder from ST to GS to Rolex GT – with occasional NASCAR Nationwide Series races added in.

“Our Mustang actually weighs more than a NASCAR Nationwide Series stock car or the BMW M3 car I race in GT,” Johnson said. “Everybody views NASCAR stock cars as being really heavy, but racing in GS really helps me when I drive a NASCAR stock car."

Check it out for yourself. Last weekend’s Road America 200 will air on Saturday at 3 p.m. ET on FOX Sports 2.