Top-5 finish in no. 96 GS class M3 for Auberlen and Dalla Lana at Kansas

This was only the second time the Turner BMWs had turned laps at the 2.37 mile 6-turn road course, once prior for testing last year.

Amesbury, MA. – August 19th, 2013 -- The Turner team rolled into Kansas riding the high carried over from the double podium at Road America just one week prior. The strong first and third place finishes in the GT class were still fresh on the mind as the team went into Kansas Speedway very optimistic about the coming weekend's results. Despite the optimism, Kansas Speedway was a bit of an unknown for the Turner team. This was only the second time the Turner BMWs had turned laps at the 2.37 mile 6-turn road course, once prior for testing last year.

Despite some challenges dialing in the Turner BMWs for the primarily banked oval road course, the team was able to make the necessary adjustments allowing the cars to perform well on both the flat infield road course and the 20 degree banking of the oval. In Friday's Continental Tire Sports Car Challenge qualifying session Paul Dalla Lana drove the No. 96 GS Class M3 to P5 with a 1:21.525, a season best for Dalla Lana in the No. 96 BMW. 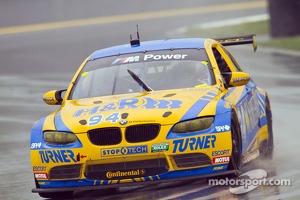 In Saturday afternoon's Continental Tire Sports Car Challenge contest Dalla Lana started off strong in the No. 96 maintaining his position in the top four until a contact with the No. 48 BMW forced him in for an early pit stop with a broken tie rod and full stop with driver change. Auberlen returned back to pit lane just a couple laps later for a front toe adjustment sending him one lap down to 15th position.

A combination of full course cautions and DNFs allowed Auberlen an impressive charge back to the front of the GS field to finish fifth to clinch Dalla Lana and Auberlen's fourth top five in CTSCC this season.

Michael Marsal and Billy Johnson paired up in the No. 93 GT Class M3 for the second time this season. Marsal completed a flawless forty five minute stint to hand the car over to Billy Johnson. With a little over thirty minutes remaining Johnson came in for a quick 17 second stop for two right side tires and fuel allowing him to jump to third.

Johnson found his rhythm clicking off consistently fast laps in the No. 93 M3 to hold third until a right rear tire blowout on the banking, forcing Johnson to limp to pit lane with a little over 3 minutes remaining in the race. The late unexpected stop forfeited their top three position to finish ninth.

Billy Johnson explained. "It was great to be back behind the wheel of the No. 93 and to co-drive with Michael (Marsal). The team did a great job with the car, working out handling issues that plagued most of the practice to give us a car capable of a podium. It's a real bummer to get that right rear blowout in the banking with less than 10 minutes to go which ended our race. We were running in a solid 3rd place."