Unfortunately, the race didn’t play out as planned after the No. 76 Columbus Truck/Honda Civic Si lost fourth gear.

Lakeville, Conn. – As the 2013 GRAND-AM Continental Tire Sports Car Challenge season came to a close at Adam Burrows’ home track of Lime Rock Park, he and Compass360 co-driver Ray Mason had been hoping to finish out the year on a high note. Unfortunately, the race didn’t play out as planned after the No. 76 Columbus Truck/Honda Civic Si lost fourth gear and the team was forced to retire early. 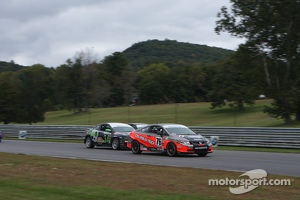 The final race event of the year saw just one practice session Friday morning ahead of ST qualifying which was then followed by the 2.5-hour race. The short 1.53-mile Lime Rock road course weekend sets the stage for a special race as the large Continental Tire Sports Car Challenge field is split into two standalone events with the ST race taking place Friday afternoon.

The Compass360 Racing driver pairing worked to dial in the setup of the No. 76 Honda machine during the 45-minute morning practice with both Burrows and Mason taking laps behind the wheel.

The 15-minute qualifying session was shortened by a black flag period and Mason would start the race from 24th on the grid. He ran as high as 21st during his opening stint before he lost fourth gear and was forced to retire the car just 34 laps into the race.

“I was involved in some really close racing early on—guys weren’t racing dirty—just really really tough,” said Mason. “So we got behind a little bit. I was able to make up those spots, but by then I started to feel something with the car…and soon enough, we lost fourth gear and just had to stop for the day. It’s a shame, but I’m already looking forward to next season.”

“There’s really no better place to be than the racetrack but unfortunately today didn’t pan out as we had hoped because we had some mechanical issues that forced us out,” said Burrows. “But, like I said from the beginning, we are part of a team here. It was a huge team effort to try and get Ryan (Eversley) and Kyle (Gimple) to first place in the championship.

Unfortunately it didn’t work out for them, but they did come in second (in the 2013 Championship), which is massive. Compass360 is a great team with a tremendous history, and for them to get another second in the championship is something for the whole team to be proud of.”

“I can’t say enough about the job that both Ryan Eversley and Kyle Gimple did this year,” added Burrows. “Those guys were spot on, had a number of podiums. Ryan was just awesome again, and I’m always impressed by everything that he does—the amount of work he puts into it, and the tremendous effort he puts forth on the track. Congrats to Compass360 on another strong finish to the season.”

The GRAND-AM Continental Tire Sports Car Challenge season-finale will be televised on FOX Sports 1 on Sunday, October 6 at 3:00 PM (ET).

Lime Rock: Carter and Plumb put another CTSCC season in the book