Detroit – June 2 – Two of the Porsche 911 GT3 Cup teams at the two-hour Rolex GRAND-AM GT race on the street course on Belle Isle were lurking in the top three early in the event, but a combination of on-track incidents and just not enough performance versus the competition pushed them back before the checkered flag. 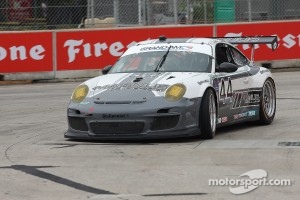 The Magnus Racing Porsche 911 GT3 Cup car, with John Potter and Andy Lally at the controls, started eighth and finished sixth as the top-finishing Porsche, and continued to keep the points pressure on the class leaders. Both drivers had good stints and stayed away from some of the on-track problems that plagued the others. Magnus Racing won the 2012 Rolex 24 earlier in the season in their Porsche.

"This is definitely a very interesting track to race on, overall I'd say we're content with sixth. The guys did a great job and made great calls on the car, but it's just really difficult to pass here. We definitely take satisfaction as the top finishing Porsche; we just wish that was a higher finish!" said Potter, who started the race for Magnus.

"We walked away with solid points, so we're happy with that. To do well at a track like this, the Porsche would definitely need a few rule changes to be able to walk away with top finish, but at least we were the top Porsche. It was a great scrap with the guys we were racing with, and a really stacked field of talented drivers, so we'll take it," said Lally.

The GT class was won by the Taylor/Edwards Camero, with the Segal/Assentato/Segal Ferrari second and the Liddell/Edwards Camero third.

The only Porsche to lead the GT class, however briefly, was the newest team to the Porsche lineup – the Horton Autosport drivers Patrick Lindsey and Eric Foss. The team decided to forego a pit stop in the first hour when the rest of the field came in under yellow, and took over the lead for four laps, hoping for another yellow flag before the tires started to wear. Unfortunately, the grip went away a few laps before they could get into the pits, and they lost several positions to the field. Then, after the driver change, Eric Foss was tagged by one of the Ferraris, and that caused an additional pit stop, resulting in a tenth-place finish.

“We entered the race with a heavy heart as a terminally-ill boy, Atticus Hansen, who was scheduled to join us as the track, passed away earlier in the week, but we put our heads down and tried to concentrate on the race. Our dry set-up was not the best, so we didn’t qualify well, but the car was great today. Owner John Horton did a great job preparing the car for the race, and, but pitting late, we were able to make additional adjustments as I drive a longer stint. We knew the others had fresher tires before we could pit, but we might have finished higher if Eric hadn’t been hit by the Ferrari. But we’ll get the Porsche together and head for Mid-Ohio,” said Lindsey.

The Brumos Racing Porsche 911 GT3 Cup, with Andrew Davis and Leh Keen driving, missed a chance to move up on their competition when a wheel worked itself loose after the first pit stop, moving them from third place to last after the loose wheel then damaged some suspension and brake components. They ended up 13th in GT.

“We had a really good car, but the Ferrari and the Camaro just drove away from us at the start, so I settled into third place, hoping we could make up some time in the pits, as we usually do. This time, however, the pit stop didn’t go well, and we lost three laps we couldn’t make back. We proved last year that we don’t give us easily, and we plan to fight back starting next week at Mid-Ohio,” said Davis.

Leh Keen, who had stepped into the Brumos Porsche during the troublesome pit stop, realized that the lost laps had ruined the Brumos chances for a podium finish, but he said the team will just move on to the next event.

The Steve Bertheau/Spencer Pumpelly Porsche 911 GT3 Cup had trouble right from the beginning, being hit by a prototype and later suffering a deflating tire. The team, which qualified 15th, had moved up to 11th place and was on the lead lap who they had the flat tire, and finished 15th.