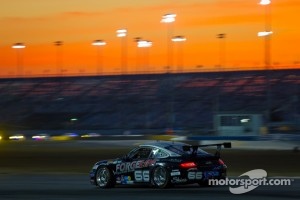 Daytona, FL, January 28, 2012 – Four hours in to the 50th running of the Rolex 24 at Daytona and the number 66 TRG Porsche GT3 Cup car of Dominik Farnbacher, Patrick Pilet, Ben Keating and Allan Simonsen has moved in to second place in GT after starting 17th in an impressive display of speed with caution.

As several of the Daytona Prototypes and GT cars begin to suffer from mechanical issues and the ill effects of accident damage, the number 66 team has managed to avoid any drama and kept climbing through the field.

Second in the GT class only to the Magnus Racing entry of Potter, Lally, Leitz and Rast and ahead of the fabled Brumos Porsche of Keen, Davis, Lieb and legendary American endurance racer, Hurley Haywood.

Car Number 64: Started the race 34th. The car, driven by the team of Salazar, Ardagna, Costabal and DiGuida, has temporarily dropped to 43rd place

Car Number 65: The team of Hedlund, Cox, McCarthy, Michaelian and Castellano started the race in 38th place in the GT class and has dropped slightly to 44th place

Keating and Simonsen car started 17th in the GT class and is currently runs 2nd. At the 3:17 mark of the race, Patrick Pilet took over the lead in GT on lap 101 and held it until pitting on lap 105. Dominik Farnbacher returned to the race in 3rd place. He managed to reclaim 2nd on lap 124

Car Number 67: Started by 2011 GT class winner, Steve Bertheau, and co-driven by Goossens, Henzler and Pumpelly and Bleekemolen has gone from the 39th qualifying spot in GT to 28th at the four-hour mark

Pirro back at Daytona 24 after three decades

Williams signs 7Up has new sponsor