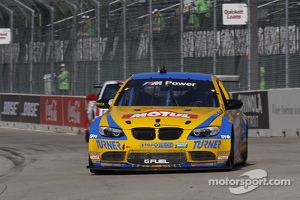 Belle Isle Park, a 14-turn street course used for the Indy Car Detroit Grand Prix is the only street course race of the 2013 Grand-Am season.

Following a full day of practice and qualifying on Friday, both Turner BMW M3s took the green flag for Saturday's race. The two hour street race presented unique challenges for both drivers and crew due to the uneven and varying (street) track surface.

Michael Marsal started behind the wheel of the No. 93 BMW M3, handing it over to Gunter Schaldach after the first pit stop with a little over one hour remaining in the race.

The duo managed an 8th place finish with strong stints by both drivers, despite the contact made by a passing DP car on Marsal early on in the race, costing crucial time for the No. 93 M3.

Paul Dalla Lana and Bill Auberlen finished 10th in GT in the No. 94 BMW M3. Turner Motorsport remains fifth in team points, just three points out of the top 3 in the Rolex Series Chamionship.

"This was my first time to this track and I truly enjoyed it. We had a great car with zero issues the entire weekend. Unfortunately we went a lap down before I got in the car and I was unable to make it up." said Gunter Schaldach.

Will Turner commented, "Detroit didn't really go our way this year – street races are always tough. We are looking forward to the next 2 races, Mid Ohio and Watkins Glen where our BMWs always seem to be quick."

Detroit kicks off a busy month of June for the Turner Motorsport team. The cars will return back to the shop this week for a quick turn-around before heading to Mid Ohio and then to Watkins Glen for the Sahlens 6 hour.