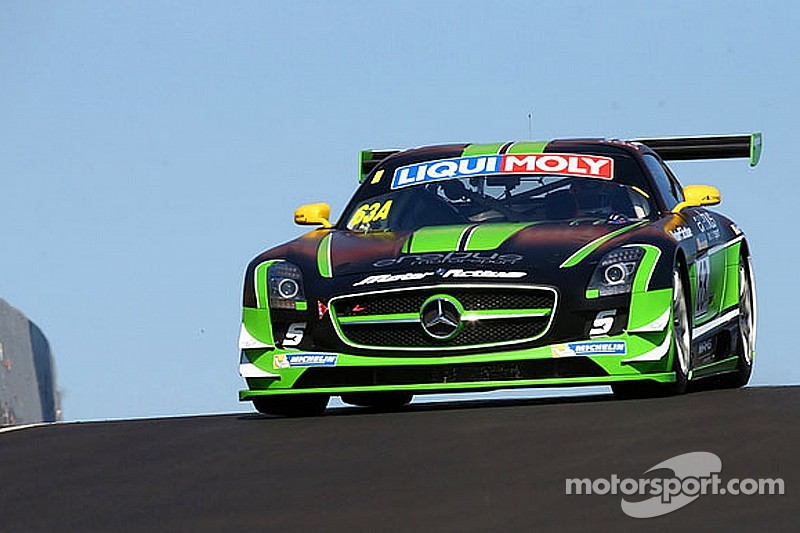 After a seven week break, the Australian GT Championship presented by Pirelli returns to action at Sydney Motorsport Park for the second event on the V8 Supercar calendar with two 60-minute races scheduled across the weekend. An impressive 26-car field will meet the starter, with a record high 10 Championship class cars and 10 Trophy class cars dominating the entry list.

We’re at the mid-point of the season, and already patterns are starting to emerge, patterns which could see a number of drivers firm in the odds to claim the series silverware.

Leading the charge for outright Championship Class honours is points leader Richard Muscat in the Erebus Motorsport Mercedes Benz SLS AMG (in photo from previous outing). So far in 2014 Muscat has been the standout with three victories from six races (Sandown x2/Townsville). He holds a 43-point lead in the points over Bathurst 12-Hour winner John Bowe, but comes to SMP on the back of the complete domination of the round in 2013 by Erebus favourite Jack Le Brocq, an ominous sign perhaps for Muscat’s rivals.

Bowe will be joined once again by car-owner Peter Edwards and they will be hoping for big things, however they won’t have things all their own way. 12-months ago the Maranello Motorsport team claimed a podium finish in race two, whilst reigning champion Klark Quinn carded a pair of second placed finishes.

Quinn has upgraded his mount since last season, and will enter SMP for 2014 in the relatively untried McLaren MP4-12C. Tony Quinn failed to make the podium in 2013, but has been quick so far this year and is currently third in the points, so don‘t discount him, nor the Steve Richards/Justin McMillan combination, they’ve taken pole twice in 2014 and are hungry for a result, the Interlloy Gallardo too is quick around SMP.

Whilst the battle for outright honours will keep the fans on their toes, the fight for Trophy Class honours is really starting to heat up. Local hero Rod Salmon leads the points in his Skwirk.com.au Audi R8 LMS, but he will have an internal fight on his hands with Melbourne Performance Centre team-mate Dean Koutsoumidis, who is looking to recover from the Phillip Island accident which took the points lead away from he and co-driver James Winslow.

The battle between the two teams will be a highlight, as SMP is also the ‘home’ track of their co-drivers Nathan Antunes and James Winslow, the two youngsters acting as driver coaches on an almost full-time basis at the facility.

Last year Antunes made his Australian GT debut at SMP, stunning the established stars. He has just returned from another weekend in the GT Asia Series, but likewise Winslow too has been busy, having recently returned to the Formula 3 category for which the Englishman is a two-time national champion, so both are fit and race-ready.

Throw in Phillip Island Trophy Class winner Theo Koundouris in his Supabarn Porsche Cup-S, former race winner Kevin Weeks in his gorgeous Supaloc Ford GT and new AGT recruit Barton Mawer in the impressive Lotus Exige S GT3 and you have one hell of a race on your hands, a race which could well rival that of the outright cars!