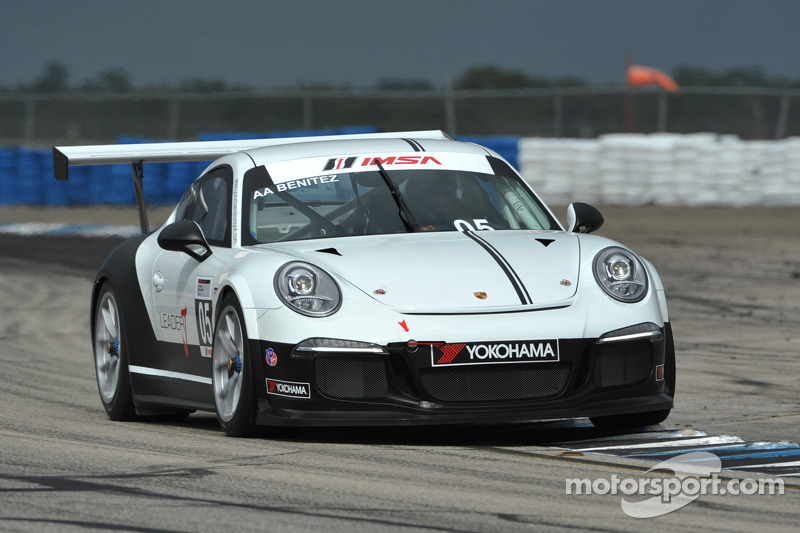 Round five completed, round six cancelled by too-wet track

Angel Benitez Jr. earned his third victory of the Porsche GT3 Cup Challenge USA by Yokohama season in Round 5 on Saturday, May 24 at Lime Rock Park.

Round 6 of the season - also scheduled for Saturday - was abandoned due to unsuitable conditions on course caused by heavy rain in addition to a local curfew. IMSA will evaluate further consideration for replacement of this round.

Benitez, from Valencia, Venezuela, has earned all three of his victories this season from pole in the No. 05 Formula Motorsport/Avid Motorsport Porsche 911 GT3 Cup car. He swept the season-opening rounds at Sebring International Raceway by 3.103 and 3.735 seconds, respectively.

But Benitez was pushed much harder in this race by series newcomer Christina Nielsen in the No. 25 NGT Motorsport Porsche.

Nielsen, from Aarhus, Denmark, earned her first podium finish in the series by finishing second, just .372 of a second behind, after pressuring Benitez for nearly the entire 45-minute race. She became just the second female driver to earn a podium position in the elite Platinum Cup class in the 10-year history of the Porsche GT3 Cup Challenge USA by Yokohama.

"It was a good race," Benitez said. "She made me work the whole way.

"We're really happy. We are the only car on the team. This is dedicated for the team, my dad, the family, Formula Motorsport, Avid Motorsport. It's great to be racing for Porsche. I love their brand. Porsche works great with Yokohama."

Sloan Urry, from Park City, Utah, finished third in the No. 20 JDX Racing entry for his third podium finish of the season. He won the Yokohama Hard Charger Award for climbing to third after starting sixth.

Nielsen, who started third, passed Michael Schein for second on the second lap and never lost that spot. She cut the gap to Benitez in the closing laps but also was forced to keep an equal eye on her mirrors at the hard-charging Urry and Michael Lewis.

The race for the last two podium spots was intense on the final lap. Nielsen, Urry and Lewis went three-wide into the fast Turn 1 on the narrow circuit, but all three made it through cleanly. Nielsen held off Urry for second by less than four-tenths of a second.

"I'm happy to have my first podium," Nielsen said. "It was a close call on the last lap in the first corner."

Nielsen earned a podium spot in just her fifth start in the series. She competed the last two seasons in Porsche GT3 championships in Europe and the Middle East after beginning her career in karting and junior open-wheel formulas.

"There are elements that I learned from the other tracks that I just put into place here, and it worked," Nielsen said. "It's more than I expected. I didn't expect to be within the top that quickly."

Lewis, from Laguna Beach, California, ended up fourth in the No. 98 Competition Motorsports/Curb-Agajanian Porsche, less than six-tenths of a second behind Urry.

The race was filled with hard racing and occasional side-by-side contact as drivers chased the limited space on the seven-turn, 1.5-mile circuit. Lewis and fellow young star Colin Thompson engaged in a fierce, full-contact duel for fourth late in the race before Lewis closed on Urry and Nielsen for a podium position.

Kasey Kuhlman, from Cincinnati, was the first Platinum Masters (age 45 and older) finisher in the No. 15 Wright Motorsports entry. It was the fourth consecutive race this season Kuhlman topped the division. Javier Quiros, from San Jose, Costa Rica, was second in Platinum Masters in the No. 27 NGT Motorsport Porsche. David Williams, from Annapolis, Maryland, placed third in the No. 37 TPC Racing 911 GT3 Cup car.

Patrick-Otto Madsen, from Boca Raton, Florida, won the Gold Cup (2010-13 model cars) class for the second time this season in the No. 99 ANSA Motorsports Porsche. Michael Levitas, from Baltimore, was second in Gold and was the leading Gold Masters finisher in the No. 35 TPC Racing entry. Fred Poordad, from San Antonio, Texas, was third in Gold and second in Gold Masters in the No. 02 Competition Motorsports Porsche. Jeff Mosing, from Austin, Texas, rounded out the Gold Masters podium in the No. 01 Topp Racing 911 GT3 Cup car less than an hour after he finished the Continental Tire SportsCar Challenge ST class race at Lime Rock.

The next two rounds of the Porsche GT3 Cup Challenge USA by Yokohama will take place June 26-29 at Watkins Glen International in Watkins Glen, New York.