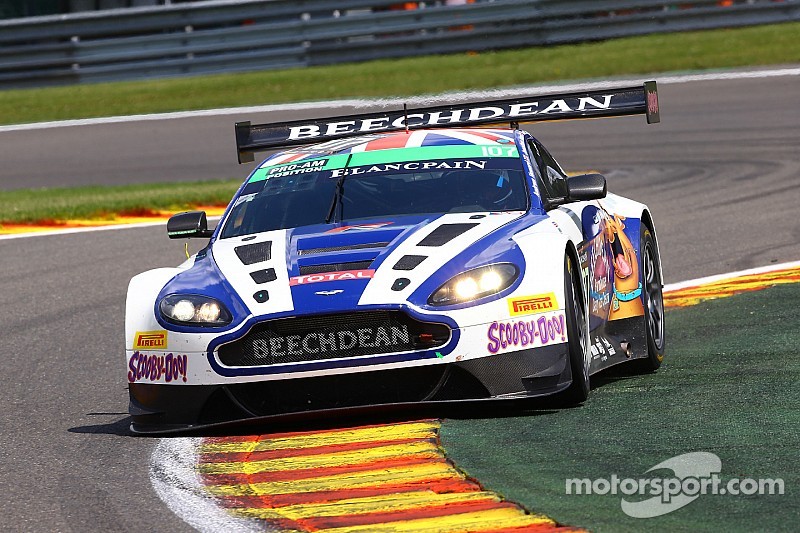 The #1 Aston Martin Vantage GT3 of the reigning champions took the GT3 pole.

Beechdean AMR bested Brands Hatch in qualifying for the penultimate round of the Avon Tyres British GT Championship with a brace of pole positions, heading the field in the GT3 and GT4 classes today.

The #1 Aston Martin Vantage GT3 of the reigning champions took the GT3 pole with a combined time of 2:52.411 after pairing Andrew Howard and Jonny Adam completed their individual sessions. Alongside the #1 car on the grid for tomorrow’s two-hour race is the #63 Trackspeed Porsche 997 GT3 R of Jon Minshaw and Phil Keen, who were four tenths adrift with their mutual effort. Row two comprises of the #4 Oman Racing Team Aston of Ahmad Al Harthy and Michael Caine, with the #5 sister car of Jeff Smith and Rory Butcher alongside.

In GT4, it was Beechdean again with the #407 Aston of Ross Wylie and Jake Giddings setting a combined 3:07.438 from Century Motorsport’s #42 Ginetta of Rick Parfitt Jr and Tom Oliphant under a tenth away. The GT4 ‘second row’ comprises of the #46 Twisted Team Parker Ginetta of Adrian Barwick and Bradley Ellis and the #48 Fox Motorsport Ginetta of Paul McNeilly and Jamie Stanley fourth in class.

Qualifying passed without incident, following an earlier second practice session which saw red flags make an appearance following an off for John McCullagh in the United Autosports Audi R8. Dry conditions reigned in Brands during track time, following a slightly damp start to the day at the Kent track.

In GT4, Beechdean AMR pairing Ross Wylie and Jake Giddings lead the Drivers Championship with 155 points from TF Sport duo Andrew Jarman and Devon Modell on 136 and Twisted Team Parker pair Adrian Barwick and Bradley Ellis on 108.5. The GT4 Teams Championship sees Beechdean AMR on 155 from Century Motorsport on 152 and TF Sport on 136.

The Blancpain Gentleman Trophy is headed by Marco Attard on 141 points from Andrew Howard’s 133.5 and Jon Minshaw’s 86.

Sunday’s race takes place at 13:10, following a two-hour race format, started by the Amateur drivers who must drive for a minimum of 50 minutes before handing over to their Professional colleagues.

Andrew Howard, #1 Beechdean AMR Aston Martin Vantage GT3
“We’re thrilled to get pole. To have the progression on last year, especially with the car, the team is fantastic as well, the whole thing is great. It’s important for us to get good positions on the grid, we’re 23 points behind the lead, it’s critical we take points out of the lead. The BMW has been super quick all season and we’re lucky to be at a track that suits us. We have a two hour race tomorrow and it will be frantic, so it’s important to be at the front.”

Ahmad Al Harthy, #4 Oman Racing Team Aston Martin Vantage GT3
“We’re really happy today, it’s been a while since we’ve been in the car. We improved each session, and we feel like we’ve set it up perfectly for qualifying. The improvement bodes well for us tomorrow, we’re starting from a good position and we need to make sure we’re cautious but make up places.”

Jon Minshaw, #63 Trackspeed Porsche 997 GT3 R
We’re very happy, I didn’t know I had that lap time in me. I struggled to break into the 1min 27secs all day, and I’m pleased to have done that. Phil says my driving is improving, it must be his tutelage! I think I’m getting the most out of it now, the car hasn’t changed, I just think I drive it better. Scoring good points is our aim here, we’ve done well today, if we can get a good result, we’ll be happy.”

Ross Wylie, #407 Beechdean AMR Aston Martin GT4 Challenge
“It’s a good way to start the weekend, and it’s great for Beechdean having double poles. Obviously it’s a long race tomorrow, but we’re starting it from the best place. It’s important to get poles in our championship bid, and it’s always in the back of our minds, but we’ve got to focus on and look forward to the race. I think it’s the best approach to have, and it takes the pressure off us.”

Rick Parfitt, #42 Century Motorsport G55 Ginetta GT4
“The two practice sessions were tough and the car was fighting us a lot in the first session. We made drastic changes and it was still difficult, but a bit better for us. We went a lot quicker, but we were running really old rubber from Spa, which I think made an impact. When we put new tyres on, we were running a hell of a lot quicker. We just missed out on pole, I think I had a chance to get the pole, but it’s pot luck out there. I had a good two sectors, but the third was a busier sector. We’ve had plenty of setbacks this year, so we’re trying to re-establish ourselves as a force. We’re racing for pride and aiming to get that elusive win that we’ve been so close to at several circuits.”

Scott Hargrove closes in on championship