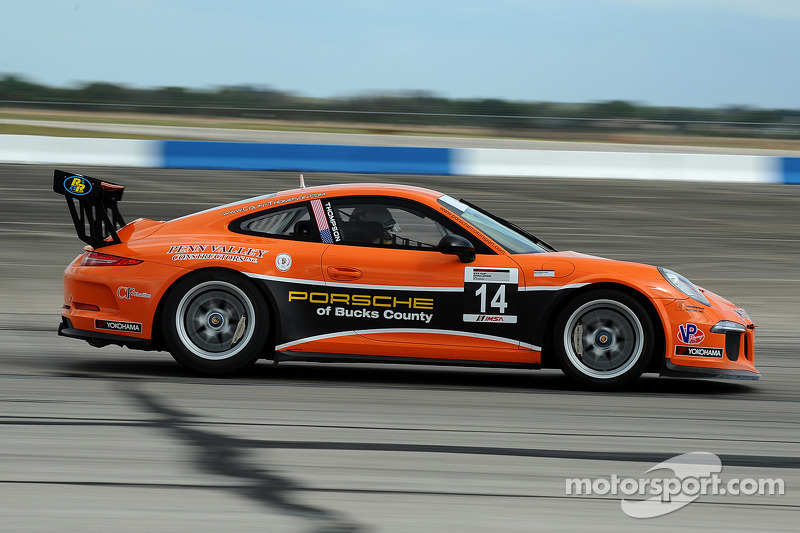 Thompson (in photo), from Doylestown, Pennsylvania, held off Benitez by .108 of a second at the finish in the No. 14 Kelly Moss/Porsche of Bucks County 911 GT3 Cup car. He worked lapped traffic perfectly over the closing laps to pass Michael Lewis and catch Benitez, trimming a gap of 4.797 seconds to Benitez with less than five minutes remaining in the 45-minute race.

"If you would have told me I was going to win the race with six laps to go, I would never believe you," Thompson said. "But I was able to make a pass on Michael that didn't slow us up, and we were wicked good getting through lapped traffic. When I got to Angel, going into the first corner of the last lap, it was a battle to get by him and we were able to sneak by him on the last corner of the last lap.

"All I knew is I wanted that first place and put it in there and stuck it, and we got the win."

Lewis placed third in the No. 98 Competition Motorsports/Curb-Agajanian entry, just .355 of a second behind Thompson in a fantastic finish in Round 6 of the season.

The final lap was a breathtaking duel between Benitez and Thompson, with their dramatic dicing through lapped traffic to add another twist.

Benitez, from Valencia, Venezuela, led Thompson by .113 of a second in the No. 05 Formula Motorsport/Avid Motorsport Porsche at the white flag. Both cars snaked around the 11-turn, 3.4-mile circuit in tandem on the final lap. Benitez came up on the lapped car of Seth Davidow - Thompson's Kelly Moss Motorsports teammate -- in the famous "Boot" section of the circuit, with less just four turns remaining in the race.

Davidow made his car wide, letting Thompson get a critical run exiting the penultimate corner of the circuit, a left-hander. Then Benitez and Thompson split Davidow's lapped car entering the final corner, a right-hander, with Benitez on the outside and Thompson on the inside.

Thompson dove hard for the curbing in the corner and made his Porsche 911 GT3 Cup stick at the apex, powering out of the corner and driving to the checkered for a thrilling first victory. International Motor Sports Association officials penalized Davidow 30 seconds after the race for blocking.

"We had a good car, an incredible car," said Benitez, who drives for the only single-car team in the Platinum Cup division. "The guys from Formula Motorsport and Avid Motorsports did a great job setting up the car. We were the fastest, and we were away from the pack. And suddenly other teams with more cars were putting their cars in front of me just to block me. He (Thompson) passed me in the last turn, and it's not cool at all that teams do that. We are all here trying to do our best to improve. They shouldn't win like that. I want to say thank you to IMSA for doing this, and I know they will do the best to resolve it."

Thompson took the championship lead by two points, 96-94, over Benitez with the victory. He and Benitez entered this event tied atop the standings with 76 points.

Kasey Kuhlman, from Cincinnati, finished fourth overall and was the first Platinum Masters (age 45 and older) finisher in the No. 15 Wright Motorsports entry. Christina Nielsen, from Aarhus, Denmark, rounded out the top five in the No. 25 NGT Motorsport Porsche.

The 2009 Gold Cup season champion Melanie Snow was the third driver on the Gold Masters podium in her season debut in the No. 57 Wright Motorsports Porsche.

Mark Bullitt earned the Yokohama Hard Charger Award after climbing to ninth after starting 14th in his No. 26 NGT Motorsport Porsche.