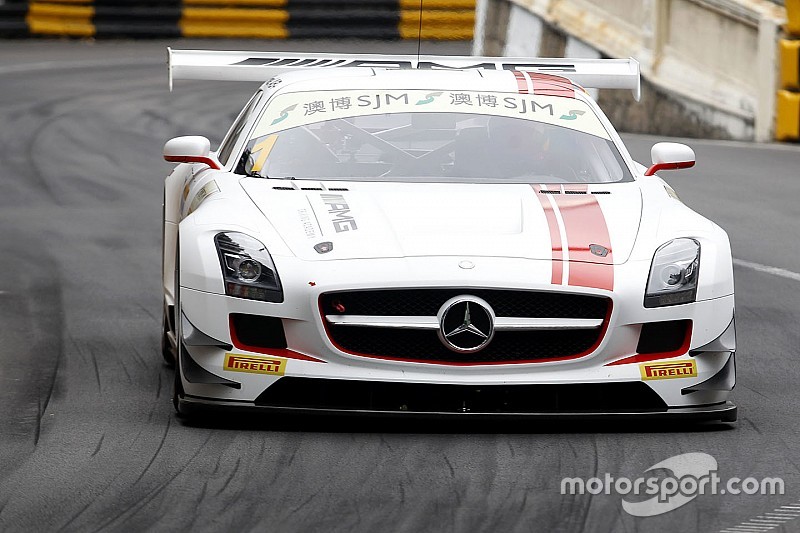 Maro Engel won the FIA GT World Cup race at Macau on Sunday after the race was red flagged because of a pile-up behind the safety car.

Engel had moved ahead of the fast-starting Edoardo Mortara on the run down to Lisboa on Lap 1, and steadily edged clear of his Mercedes teammate Renger van der Zande, who was holding off the pursuing Aston Martin of Stefan Mucke. Mortara and Rene Rast were right behind them.

The top cars held station during the early stages but the race came alive on lap 12 when Mucke hit the back of van der Zande's car - leading to the bodywork rubbing on the Dutchman's left rear tyre.

The damage allowed Mucke to challenge van der Zande a lap later in to Lisboa and, as the pair made contact in the braking zone, the Audis of Mortara and Rene Rast dived past both of them.

By this stage Engel had an eight-second advantage, but his lead was wiped away when the safety car was called on Lap 14 after Vutthikorn Inthraphuvasak crashed at Paiol and was left stranded in the middle of the track

Just as it appeared the race was heading for a restart, on Lap 16, John Shen went into the tyre barriers and triggered a pile-up as Ma Ching Yeung Philip, Jacky Yeung and the following cars all ran into each other.

The race was immediately red flagged and the result declared, ensuring Engel the win.

Speaking afterwards Engel was delighted; especially considering he had recovered from a crash in qualifying that nearly ended his weekend.

"It is unbelievable," he said.  "I am so, so happy and so, so proud to be the first winner, but I am especially proud of my team.

"I made a big mistake in qualifying and thought right there, standing at the wall, that my weekend might be over and I had blown the only opportunity we had.

"So to win this race today is amazing. I just love this place, I love this track and it feels amazing."

However, a time penalty for Mortara for jumping the start dropped the Italian to sixth, promoting Rast to second and Mucke to the final podium spot.

GT3 power to be reduced by 10 percent at Nurburgring Nordschleife