DAMS and Grosjean finish the season on a high note with a tenth podium! 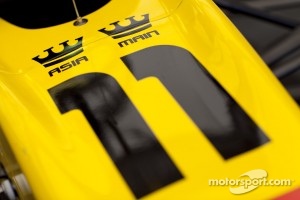 It's all over! The 2011 GP2 season ended on Sunday morning at Monza with DAMS driver Romain Grosjean, the title winner! DAMS claimed as well the second place of the teams classification.

Qualifying on Friday was not in keeping with the expectations of the car's potential or its driver's. Romain was baulked on almost every one of his flying laps and set the fifth time. The newly-crowned champion started from the third row on the grid on Saturday and quickly moved up two places. Then he found himself stuck behind his fellow-countryman, Charles Pic. The fact that overtaking is difficult at Monza was again proved as although Romain's car was visibly quicker, he could not find the opening. He had to make do with third.

On Sunday, the braking for the first chicane, another Monza specificity, cost the DAMS driver dear. He started from sixth place and was hit up the rear. He lost his rear wing and had to pit for a new one. He rejoined and set the second-fastest lap in the race – but all to no avail.

Pal Varhaug put on a much better performance in the final weekend of the 2011 season. The young Norwegian fought his way up to eleventh place on Saturday after a good qualifying session. On Sunday, he finished in the top 10, an encouraging result after a good passing manoeuvre on Adam Carroll at the end of the race.

Loďc David, General Manager: "Id like first of all to congratulate the whole team. We've won two' GP2 championships, the Asian and the main one, and that doesn't happen often. It's a well deserved reward as everybody's done a remarkable job and the car was among the most consistent of the front-runners. Finally, a big bravo to Romain who proved his mastery, his speed and the consistency of a champion."

Main race: P3
Sprint race: P22
"A big thanks to the whole team who gave me quick cars throughout the season. We worked very hard and our efforts have been rewarded. I'm pleased to give the team another podium at the last round. We've accomplished our mission and I'm proud to have won this title, something I really wanted to achieve."

Main race: P11
Sprint race: P10
"Congratulations to the team and to Romain again, they really deserve their title. For me the last two races of the season have been very encouraging. I was better in qualifying and in the race I fought without making any mistakes. I hope I can capitalize on these results in the future."