Polesitter Paul Van Splunteren got away well at the start, and halfway around the first lap had already pulled out a sizeable gap on the chasing pack. All cars got through the first corner cleanly, and Van Splunteren's efforts were aided by the fact that second-place man Michael Lyons had his mirrors full of Nikolaus Mayr-Melnhof's Lamborghini Gallardo in the early stages.

The red flag in qualifying due to Mikko Eskelinen's huge crash meant that many drivers failed to set an optimum time, and championship leaders Federico Leo and Francesco Castellaci, starting down in eighth, were among them. They initially struggled for pace, ceding a position on the first lap. Harrie Kolen in the Faster Racing BMW was moving in the opposite direction, however, snatching two places in a daring move into the first corner at the start of lap two.

Other men making their presence felt were Roland Van de Laar, who was now catching Mayr-Melnhof, and Markus Paltalla, who had risen to sixth from eighth by lap two. Yet, the Finn wasn't having it all his own way, as he soon had the Heico Sportiv Mercedes SLS of Christiaan Frankenhout on his bumper most of the way around the track.

Having earlier had to fend off the attention of Mayr-Melnhof, Lyons now found some speed in the Scuderia Vittoria Ferrari and set about matching leader Van Splunteren's times. By lap seven, the gap between the two had stabilized at 1.7 seconds. Further back, Van de Laar was now within four-tenths of Mayr-Melnhof, but the Lamborghini's superior straight-line speed meant the local driver would struggle to get close enough for a pass. Van de Laar also had to keep an eye on Gregoire Demoustier in the race's leading SLS, who was only eight tenths behind by lap eight. 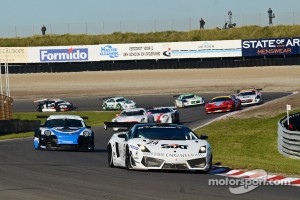 The electrical problems that had affected the Reiter Engineering Lamborghini in qualifying then resurfaced, meaning Mayr-Melnhof lost places to Demoustier and Van de Laar in quick succession on lap 10. Further down the field, Paltalla was still dealing with enormous pressure from Frankenhout, with a passing attempt being made at the first corner almost every lap.

The pit window opened on lap 15, and a lacklustre first stint from Leo in the AF Corse Ferrari meant his co-driver had it all to do in the second half hour. Lyons' improved pace was not enough to wrest the lead from the Prospeed Porsche, and Van Splunteren's co-driver Maxime Soulet took over the car and held first place without drama. The Van de Laar Porsche did not have such a good time of it, however, and lost several positions due to a slow stop as son handed over to father. They sat in seventh by lap 21.

On the same lap, the fringes of the top 10 saw some action as Nick Catsburg in the Faster Racing BMW squeezed passed Glynn Geddie in the second AF Corse Ferrari for ninth. Towards the head of the field, the top six running order after the stops was Soulet, Filip Salaquarda (in for Lyons), Albert Von Thurn und Taxis (in for Mayr-Melnhof), Patrick Hirsch (in for Frankenout), Bruce Bosi (in for Baumann) and Castelacci (in for Leo). Vand de Laar senior continued to tumble down the order; Mike Parisy was first to nip past into turn seven. The pack chasing the Dutchman were also squabbling amongst themselves – Jeroen Den Boer (who had taken over from Hoevert Vos at the stops) got past fellow BMW pilot Abdulaziz al-Faisal, who also fell to Stefan Rosina on lap 27. Van de Laar's defensive attempts were looking increasingly futile by now, and matters came to a head on lap 29, when his car clipped across the nose of Den Boer's machine mid-corner after the pair had run side-by-side down the approaching straight. 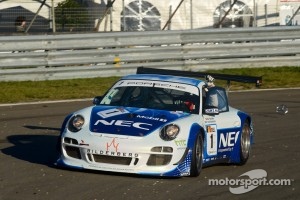 Out front, Soulet was enjoying a comfortable lead of 7.3 seconds with just 15 minutes of the race remaining. He had an untroubled run to the finish, but the drama was not over for Ronald Van de Laar, who lost control of his Porsche on the race's final lap, just as Van Splunteren and Soulet celebrated their win. Salaquarda brought the Scuderia Vittoria Ferrari home second, while Albert von Thurn und Taxis recovered to third once the Reiter car's electrical issues had sorted themselves out. Castelacci brought the AF Corse Ferrari home in ninth place, ensuring an 11-point advantage over his and Leo's nearest championship rival, Mike Parisy, going into Sunday's second race.

Christopher Haase was on pole for this encounter in one of the two Team WRT Audi R8s. Despite a less-than-stellar getaway, he did manage to hold on to his lead off the grid, just ahead of Parisy, who had sliced into second place as the field dived through turn one.

Parisy's impatience was understandable, as he and co-driver Demoustier had to win the race to have any chance of wresting the drivers' title from Leo and Castelacci. Down in the midfield, Bosi was another Mercedes driver with a title at stake. He catapulted from 12th to sixth as he chased teams' championship glory for Heico Motorsport. Their rivals, Team Need for Speed Schubert, were also on the move, however, as Claudia Huertgen rose from 16th to 11th and then set about attacking Matt Griffin's Ferrari for the final points-paying position.

Up front, Haase was making serene progress in the R8, while Parisy also put the hammer down, pulling out a noticeable gap on the third-place car after only 10 minutes. The Gael Lesoudier/Maxine Martin Aston Martin retired early with radiator damage after light contact in the early laps, capping off a nightmare weekend for the LMP Motorsport squad. Much of the action happened at the back of the field in this round, with United Autosports' Joe Osborne making decent progress from a lowly grid slot, and Dino Lunardi, al-Faisal and Geddie also locking horns over the minor positions. 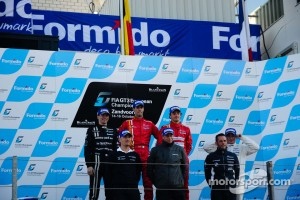 Leo and Castelacci only had to finish sixth in this race to guarantee their title, and Castelacci was biding his time behind Bosi's Mercedes in the early stages. The AF Corse Ferrari was one of the first cars to pit, while the top five all elected to stay out for a few more laps. Parisy was now matching leader Haas' laptimes, but the Audi driver had pulled out an unassailable gap, which was retained with ease when he stopped to hand the R8 over to young Belgian driver Enzo Ide.

Leonid Machitski spun the Gravity-Charouz Mercedes out of fourth place on lap 25, gifting the position to Leo in the AF Corse car. But this was merely the icing on the cake for the Italian duo, as they cruised home to win the GT3 drivers' title by a nine-point margin. Again, the Baumann/Bosi Mercedes was the car to watch, as Baumann clawed back three positions after the pitstops to take second and put victory in the teams' championship beyond doubt. Demoustier completed the podium in third.