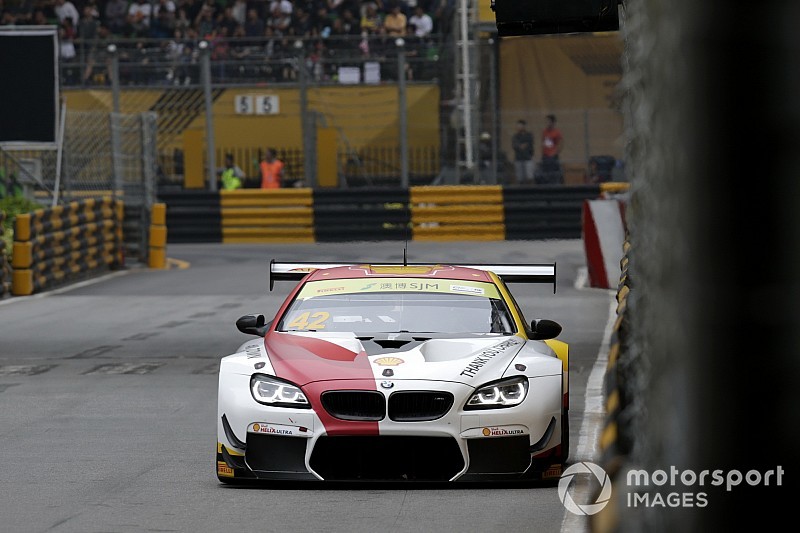 Farfus led from start to finish, clinching victory by just under one second from the Mercedes-AMG GT3 of Maro Engel to land his first full success at Macau since winning the Macau Guia race in 2009.

Having won the qualification race on Saturday by passing Raffaele Marciello at the start, Farfus ensured the Mercedes driver could not repeat such a move on the opening lap of the main event by outdragging his rival and cutting over to the inside line at the start.

Marciello looked the faster of the two in the opening third of the race, but on lap eight of 18 Marciello ran too deep in the braking area at Lisboa and bumped into the barrier after attempting to make the corner, dropping to 10th as a result.

That offered Farfus some breathing space, but Engel quickly took up the Mercedes challenge and began to reel Farfus in, spending the majority of the final eight laps within a second of the BMW.

But in a race that featured just three on-track overtakes, Engel never got close enough to challenge Farfus, whose car proved capable enough in a straight line to pull away from the Mercedes of Engel and Edoardo Mortara, who finished third.

Earl Bamber - driving the sole remaining Manthey Porsche as Vanthoor's 911 GT3-R was ruled out following a crash on the opening lap of the qualification race - joined the lead pack late on.

The two-time Le Mans 24 Hours winner clipped a wall through the Solitude Esses on the second lap, but survived that brush to finish 1.460 seconds behind Mortara in fourth.

Mathieu Jaminet (Craft-Bamboo Porsche) was one of the few drivers to complete an overtake, passing WRT Audi driver Dries Vanthoor for seventh with six laps to go, while Marciello also recovered a spot and finished ninth ahead of the lead Nissan of Alexandre Imperatori.