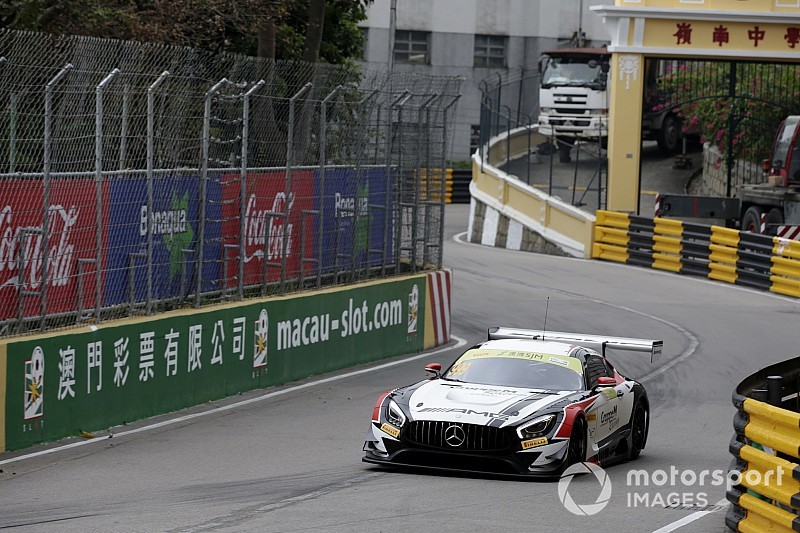 Marciello only completed 10 laps across the weekend's two practice sessions and was fifth in the order when the chequered flag fell in qualifying, but improved in all four sectors on his final run to secure pole with a 2m16.800s lap - the fastest time by more than half a second.

Before the former Ferrari protege's late improvement, Farfus had been set to deny the pair of other Mercedes drivers in the field - Maro Engel and Edoardo Mortara - a front-row lockout after himself improving in the final two minutes of the session.

Farfus, who on Thursday revealed he would leave BMW's DTM line-up to focus on his GT commitments with the manufacturer, set a best time of 2m17.357s in his Schnitzer BMW M6 GT3 to eclipse Engel's previous benchmark by 0.065 seconds.

Mortara ended up a mere 0.009s further behind despite two late improvements.

Factory Porsche pair Earl Bamber and Laurens Vanthoor were fifth and sixth respectively in their Manthey-run 911 GT3 Rs, ahead of the leading Audi of Robin Frijns, who had topped Thursday's first practice session.

Fellow R8 LMS drivers Christopher Haase and Dries Vanthoor were eighth and ninth, while Mathieu Jaminet - who crashed heavily at Police Bend in FP1 shortly after Vanthoor's Audi had an impact at a similar spot - rounded out the top 10 in his Craft-Bamboo Porsche.

KCMG's Nissan drivers struggled for pace in either practice session and fared little better in qualifying.

Alexandre Imperatori was the most impressive - dragging his Nissan GT-R NISMO to 11th, 2.5s off Marciello's time - while Oliver Jarvis, making his first start in Macau since winning the Grand Prix in 2007, and Tsugio Matsuda propped up the times in 14th and 15th.