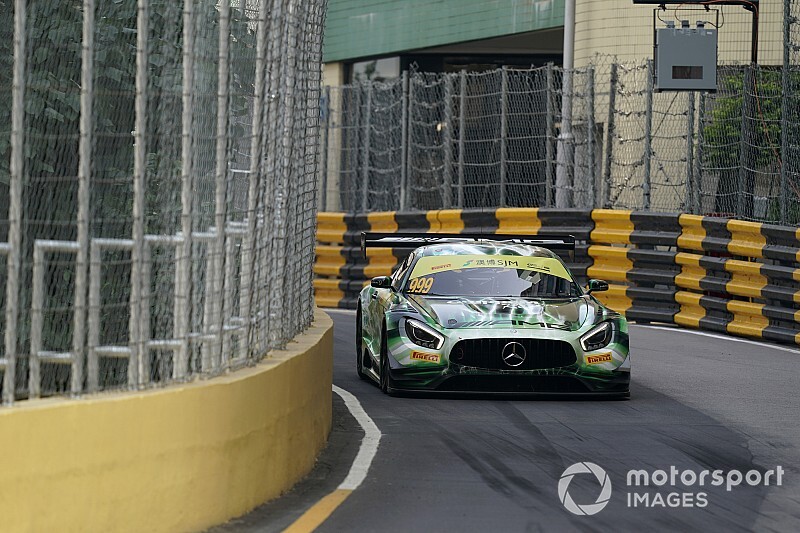 The 12-lap race got off to a wild start, as Dries Vanthoor fired his Audi into the wall at Mandarin as he tried to get a run on the polesitting Mercedes of Marciello.

The Audi driver's race was effectively done on the spot, and Maro Engel lucky to avoid a similar fate as he brushed the same wall while squabbling over fourth with Edoardo Mortara.

With Vanthoor out of the picture, Marciello spent the first lap with the two Rowe Racing Porsches, Bamber leading Laurens Vanthoor, breathing down his neck. But a reprieve quickly arrived as the Safety Car was called to clear the stricken Audi from Lisboa.

The race went green again three laps later, but only briefly. As the field filed into the Lisboa braking area Engel couldn't pull up his Mercedes, clipping Kelvin van der Linde's Audi before clattering into the back of an unsuspecting Mortara.

The clean-up lasted until Lap 8, setting up a four-lap battle between Marciello and Bamber. But while the Kiwi was able to shadow the GruppeM Mercedes there was no way past, Bamber forced to settle for second with Vanthoor in third.

"There was no point taking too much of a risk today, tomorrow is the main race," said Marciello. "It's a good starting position, now we just need to finish the job.

"To be in front after the start will be a big part of the job for tomorrow. We need to have a clean start and keep the lead into Lisboa, and then it will be in my control."

Bamber added that the it was a "cat-and-mouse" game between Marciello's Mercedes and his Porsche, the two cars making their speed in different parts of the lap.

"We got a good start, and then it was a bit interesting in Turn 2 with the Audi going off, we had to avoid that," said Bamber.

"We were strong in different places. The Porsche was good at the beginning of the lap, but a bit weak at the end of the mountain section. So it was a bit cat-and-mouse; we'd catch up and then lose a bit. It was a bit neutral."

Defending GT World Cup winner Augusto Farfus finished a fine fourth, coming all the way from 12th on the grid.

The Schnitzer BMW driver was shuffled up the order as Vanthoor, Mortara, Engel and van der Linde had their issues, ending up fifth for the second restart. The Brazilian then executed a textbook move on Christopher Haase's Audi into Lisboa as the race went green.

Van der Linde was classified 13th, repairs after the contact with Engel leaving him seven laps down.