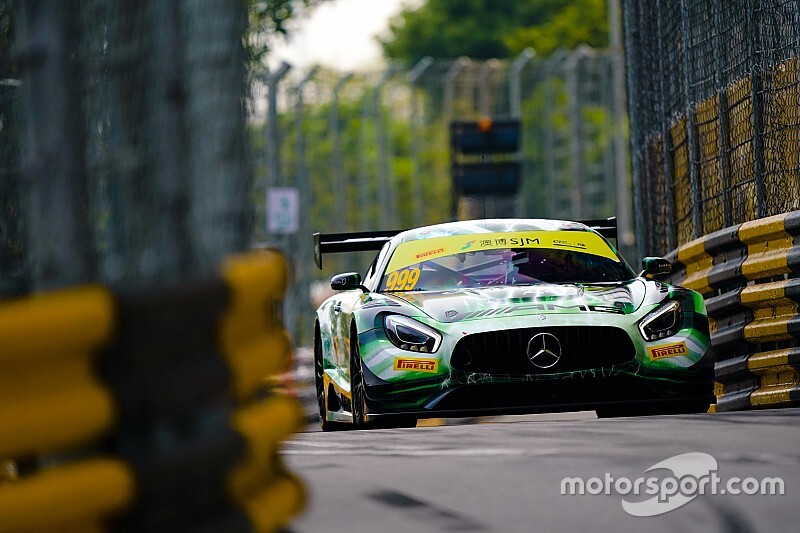 Raffaele Marciello stormed to pole position for the FIA GT World Cup qualification race in Macau with a stunning late lap in his GruppeM Mercedes.

The Italian couldn't have left his run any later, charging to top spot right at the flag after failing to get a clean lap in between stoppages earlier in the session.

The 2m15.669s left him an impressive three-tenths clear of the field, a somewhat surprising result after the Rowe Porsches had looked so dominant in practice.

"It was quite a messy qualifying session," said Marciello. "I had a red flag on my first run, on my fastest lap, so I was a long time back.

"I had to push [at the end] and the first lap was a bit messy, but the second one was quite a good lap. I few mistakes, but I was on the limit. At Macau if you start from P12 or something it's for nothing, so I had to try – and it worked out."

Dries Vanthoor will start the qualification race alongside Marciello, the Audi driver an unexpected contender for pole after struggling for pace in the two practice sessions.

When asked what changed for qualifying the Belgian said: "I actually don't know.

"I mean, we had two rough days to be honest. It hasn't been easy. But WRT Audi and myself have worked well to try and find the improvements, and it worked in qualifying. I just missed pole, but it's a good starting position for us."

After locking out both practice sessions, the two Rowe Porsches could only manage third and fourth in qualifying, Earl Bamber leading Laurens Vanthoor.

The Kiwi was left disappointed not to have made bigger gains compared to his practice effort, having ended up the best part of four-tenths behind Marciello despite improving at the flag.

"We're a little bit disappointed," he said. "We showed what we had in practice and then we got caught up. That was what we had. We went a bit quicker in quail, but we don't really have too much more.

"We're in a good starting spot and the car is working really well around here. You know what it's like – it's Macau, anything can happen on the first lap, so we'll give it a try and see what happens tomorrow."

Maro Engel was dumped from third to fifth at the flag by the Rowe Porsches, the German set to share the third row with fellow Mercedes driver Edoardo Mortara.

Joel Eriksson was the best of the BMWs in 11th, one spot clear of reigning Macau GT winner Augusto Farfus.

Watch every session from Macau live and free, from anywhere in the world, with Motorsport.tv.