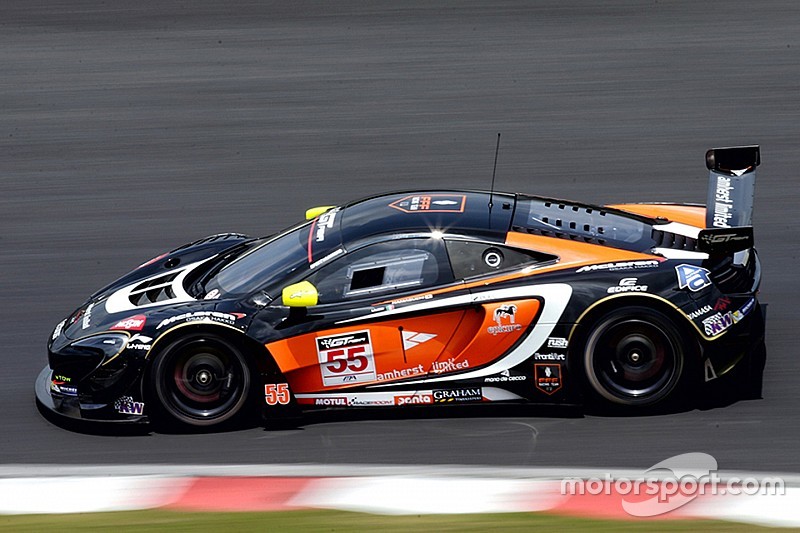 Hiroshi Hamaguchi and Tonio Liuzzi weathered all challenges for a dominant win.

The GT Asia Series first competed at the former Aida Formula One circuit in 2013, and at that point the event was dominated by Craft-Bamboo Racing, presenting their rivals with an ominous sign ahead of the two 50-minute races that would signal the second event on the 2015 programme.

Balance of performance was the big discussion point ahead of qualifying with some believing they had been ‘hard done by’, however by the close of the two 15-minute sessions, it was clear the parity between the cars was closer than it had ever been, with less than a second covering the top 12 cars.

Friday’s rain though had dramatically changed the track conditions compared to the unofficial testing that teams had done on Thursday, presenting many of them with a real challenge ahead of Saturday’s opening race.

With little separating the teams, there was great anticipation from the teams and the fans ahead of the opening race, but the drama started even before the green light, with the #1 Clearwater Racing Ferrari of reigning champion Mok Weng Sun alight down at turn ten.

Ferrari of Gianmaria Bruni catching fire on the out-lap

Factory Ferrari star Gianmaria Bruni was set to start the car, but a fire erupted in the engine bay on his roll-around lap. The quick-thinking Italian found a marshalling point to have the fire extinguished, however it took an agonising 90-seconds for it to be put out, ending the teams chances of making the race, and ultimately jeopardising their chances of taking any points away from Okayama.

Once the race started though it was all Bentley up front, but as things progressed, the consistent FFF Racing Team by ACM McLaren 650S GT3 of Tonio Liuzzi and Hiroshi Hamaguchi continued to circulate quickly, picking off one car after another to claim an emphatic victory for the new team ahead of the TP12 Racing Ferrari of Carlo Van Dam and Todd Piti, and the Ferrari of points leaders Anthony Liu and Davide Rizzo.

Tonio Liuzzi - 1st FFF Racing Team by ACM McLaren 650S GT3: “We’re all really proud of the job we’ve done. Obviously we were pushing very hard because we felt that Okayama better suited the characteristics of our car. We were still struggling a little on the long straights, but through the infield it was very quick. I had a good start and tried to keep out of trouble into the first corner. I was able to pass one of the Bentleys into turn one, and had quite good pace, so just tried to conserve the car to hand over to Hiroshi.”

Hiroshi Hamaguchi - 1st FFF Racing Team by ACM McLaren 650S GT3: “I knew we had a chance to be on the podium, but didn’t expect we’d be here as winners. After qualifying we knew we had a pretty good pace. I was concerned about Anthony [Liu] from behind, but Carlo and Tonio were very close so I knew I’d have to battle Piti. He overtook me on my out lap because we’d made a tyre change, and I was on cold rubber, so it took a couple of laps to get back up to speed. After they warmed up, I overtook Piti again and could just control the pace from there.”

Carlo Van Dam - 2nd TP12 Racing Ferrari 458 Italia GT3: “Expectations were not so high for today, but we tried to make the most of it. I had a mega first lap and took three or four cars, then pushed Tonio the whole way. I was trying to find a way through but that was all we could get out of it with the BOP we have now with the Ferrari. Piti did a great job, and is improving all the time. Our first race together in the Ferrari and we have a podium finish.”

Piti Bhirom Bhakdi - 2nd TP12 Racing Ferrari 458 Italia GT3: “The Ferrari is quite different from the car I previously used, so I am still getting used to that. Initially we had a bit of trouble finding the right setup for this circuit, but I think we found it and were able to push on. On the last lap I just focused knowing that Anthony was right behind me, but we held on at the line to take second.”

Davide Rizzo - 3rd BBT Ferrari 458 Italia GT3:  “I had a nice start, but there were too many Bentleys in front, you couldn’t even see the light [laughs]. I was able to run with Carlo and Tonio until we got caught by the Aston coming out of pit lane and I had to avoid him, so lost some time to the guys in front. I’m happy we’re on the podium again, considering we took an additional eight second penalty during the pit stop.”

Anthony Liu - 3rd BBT Ferrari 458 Italia GT3: “Today the car wasn’t good. They keep screwing with the BOP every damn race which makes it difficult. We’ll see what happens tomorrow, I’m not sure that leading the points actually means anything right now, but we’ll see.”

Takuma Aoki - 1st Dilango Racing Lamborghini Gallardo LP560 - GTM: “I’m very happy to be back in Okayama. I have very special memories here after winning Japanese Superbikes in 1994-1995-1996. We had a number of problems in practice, but I had a great start, and had some consistent laps, and Urata-san did a great job and put in some fantastic laps to bring the car home to victory.”

Another historic moment at Okayama as Bentley takes maiden victory