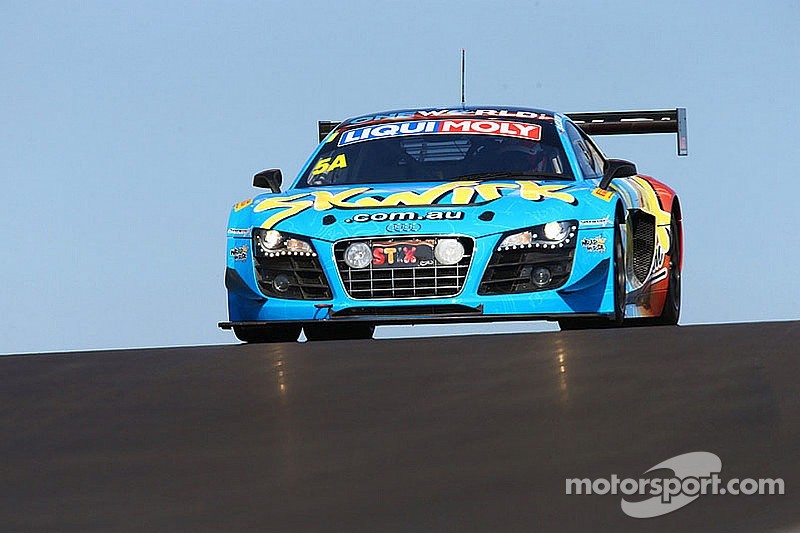 Points lead was in jeopardy at final race weekend.

Coming into the final round of the Australian GT Championship presented by Pirelli at Highlands Motorsport Park in New Zealand, two-time Bathurst 12-Hour champion Rod Salmon was in the box seat to claim his maiden Australian GT crown, but despite his comfortable points lead heading into the final two 40-minute races of the season, his title chances hung in the balance all the way to the chequered flag in race two.

“I have to say it has been a year that has gone really well for us up until the final race of the season” Salmon admitted. “I must admit it was a tough way to close out the season and I was reflecting on that when someone reminded me that we had won the championship even though this final round has been a complete disaster.”

After a tough run in race one which saw the #6 Skwirk.com.au Audi spinning at turn four after contact with local driver Inky Tulloch - dropping Salmon and regular co-driver Nathan Antunes to just 32 points clear of rivals Dean Koutsoumidis and James Winslow - the Skwirk Audi duo suffered more problems in race two, but despite rising engine temperatures and the threat the ECU would shut the engine down completely, they held on for fifth place and Salmon’s maiden GT title.

“In race two we were running around with the engine temperature up over 120 degrees and running in ‘limp’ mode, yet despite that we were able to stroke it home.

“I’m very proud that we’ve won this championship, it’s actually feels better than last year’s third place in the outright championship because it was very competitive all the way through. If you put one foot wrong this year, you suddenly dropped down the leaderboard. Really for us it was Townsville where we had the clean sweep - that elevated us up to where we were leading the championship and we didn’t relinquish it from there.”

The weekend had started strongly for the Salmon/Antunes combination with Antunes setting some of the fastest Trophy Class times of the weekend in amongst the Championship Class cars which included a list of drivers like Craig Lowndes, Shane Van Gisbergen, Garth Tander, Steve Richards and Craig Baird.

By qualifying Antunes continued to hold the upper hand over title rivals Equity-One Motorsport, but by race one - despite a strong start - the advantage soon switched back to their rivals.

“I was just taking it easy,” Salmon admitted reflecting on his strong race start. “I played it safe into the bus-stop chicane, and then followed the big Camaro through Southern Loop and down towards turn four. He moved very wide on the way in, so I took a run down the inside. The door was open, but he clearly hadn’t seen me because by the time I got up to his rear wheel, he turned in and that was that - I was already committed.”

Unfortunately for the Audi driver, he was given a drive-through penalty to add to his pain, and despite working his way back through the field to pit within sight of the Trophy Class leaders, an accident that claimed the Ascari of Trophy class rival Keith Kassulke just after Antunes stepped into the car effectively ended the race as it was immediately brought under Safety Car conditions, the field ultimately shown the chequered flag three minutes early as a result.

Too hot in race two

For race two over-heating issues plagued the duo from the drop of the flag, yet despite this, they held on to finish fifth, and despite their rivals claiming the round victory, Salmon was crowned champion by just 15 points..

“Trophy Class was a real ‘Pro-Am’ affair this year and I think that was really good,” Salmon admitted. “As an ‘Am’ with a ‘Pro’ next to you, you really push yourself. I pace myself to Nathan [Antunes] - obviously I can’t do Nathan’s times and I don’t expect to be able to do that - but I give myself an acceptable margin for what I am - a part-time driver - and have someone teach you and educate you to help improve you at certain parts of the track and improve your performance in the race car, I think is excellent - it’s a great formula.

“So far as the title race was concerned with Dean [Koutsoumidis] and James [Winslow], with the performance of the Audi team this year, it was always likely we were going to go into the final round battling for the championship with our MPC team-mates.

“There were some moments in the data room where we were thinking ‘why are we sharing data’.. the championship is actually reliant on how well the cars are set up and we were - I think - the best at setting the car up. I think Rik Kemp as our engineer did a fantastic job, Nathan, myself and Rik worked in perfect synergy all year without any issues.”

Sadly for the Melbourne Performance Centre [MPC] run team, there was little time to rest, as the Highlands 101 event was scheduled for the following day, Salmon and Antunes teaming up once more, although this time, behind the wheel of the Skwirk/Beechwood 2014 Audi R8 LMS GT3 ultra.

“This was the car we were hoping to contest the 2014 Australian Championship in,” Salmon confirmed. “Sadly though it was written off during qualifying for the 2014 Bathurst 12-Hour and couldn’t be repaired in time for the opening round, so we leased Peter Conroy’s LMS GT3 for the season and elected to rebuild the Bathurst Audi in 2014-spec ahead of next year’s 12-Hour.”

It was quick too, Antunes during practice for the 101 setting the fastest practice time of the weekend, well under the standing lap record and faster than all the V8 Supercar stars.

They weren’t able to duplicate that pace during qualifying - although like their five MPC stable-mates, they were playing the ‘strategy’ game.

“There’s no real benefit starting from the front of the field when you have a three-hour race ahead of you,” Salmon shrugged.

That saw the stunning new Skwirk/Beechwood #5 car start from the eleventh row (P21) but with a much reduced compulsory pit stop [CPS] penalty over their rivals who qualified further towards the front, bringing the 2013 ‘101’ podium finishing team right back into the equation.

Salmon once more started the car, and the newly crowned Trophy Class champion was right in the thick of the action, holding down a place well inside the top ten ahead of his exit from the car allowing Antunes to charge through the field over the closing stages of the race.

Comfortably third ahead of the final lap, the MPC team had fashioned back-to-back ‘101’ podiums for Salmon, but just metres out from the finish, that third became second as the leading Erebus Mercedes of Richard Muscat rolled to a stop out of fuel.

“I couldn’t believe it,” Antunes admitted post-race.. “I was happy that we’d gotten Rod back onto the podium, and wasn’t expecting any more than that, but second is a real bonus and great reward for the effort of the team through 2014.”

“We have a few exciting things planned for next year,” Salmon explained. “Obviously Nathan and I will be back in the Skwirk/Beechwood car, but we have an exciting announcement about our third driver for Bathurst very soon. We’ve proven the car is more than capable, and despite the success of some of the other marques up there over the last couple of years, Audi has been the endurance racing benchmark again in 2014, so we’re expecting a strong showing. I can’t wait!\!”

The 2015 Australian GT Championship presented by Pirelli will kick off at the popular Clipsal 500 in late February, but three weeks prior, more than 40 of the world’s best GT3 cars will be at Mount Panorama in Bathurst for the annual Bathurst 12-Hour.

Sean Edwards Trophy to be awarded in 2015