Surprise victors in opening round of GT Asia in Korea

Few would have predicted the outcome of the opening round of the GT Asia Series at Korea International Circuit.

Based on the qualifying results from the two 15-minute morning sessions, few would have predicted the outcome of the opening round of the GT Asia Series at Korea International Circuit, that is few except ‘Spirit of Race’ Ferrari drivers Davide Rizzo and team-mate Anthony Liu.

“After the two qualifying sessions we knew we were good enough for a P2 or P3 placed finish,” Liu explained after accepting the winners trophy, “but we needed a little bit of extra luck to go after the win, and that came our way today.”

The pair were aided in part by a frustrating run from the Clearwater Racing team. All three teams had qualified strongly, and all three ran inside the top four early in the race, but in the end only one was standing and unfortunately for Hiroshi Hamaguchi, a late race spin - just three corners from home - meant the dual championship winning team would only place second, whilst the two Ferraris were classified non-finishers. 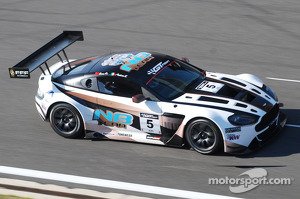 Qualifying started as many expected - with the new Aston Martin NB Team grabbing pole in the opening ‘Pro’ drivers session, Thursday pace-setter Andrea Caldarelli surprising even himself with the pace he had predicted would be a low ‘8’ just 24-hours earlier, the Italian claiming the pole with a 2:07.608.

“That was pretty good,” he admitted. “I didn’t think we would be that fast, but the track had improved and so too the car. It’s a long race though, we’ll see what happens.”

Keita Sawa who held the top spot early admitted that his strategy was all about the long game. “The car is good, my team-mate is getting faster and I’m pretty happy, but we’re not here to win the race, we’re here to win the championship.”

With two championships in four years, and four season podium results, you couldn’t argue the sensibility of their reasoning.

With Rob Bell putting the Clearwater McLaren into P3 and Craig Baird the second Clearwater Ferrari into P4, the team-boss seemed to have everything well in hand.. at least until the race got underway.

Quick off the line, Sawa actually led into turn one, before Caldarelli fired back into turn two. The leaders were keen to make an impression, but some early posturing saw contact amongst some of the front-runners, all of whom were looking to make up early positions.

As the field settled down though it was McLaren factory favourite Rob Bell who made the most of the situation to slip through to the lead. “The leaders were so busy worrying about each other that I thought I’d sneak up the inside,” Bell explained post-race.

Heading into the compulsory pit stop [CPS] it was multiple Australian Carrera Cup champion Craig Baird who was first in, although from the activity around the car, it was clear the stop was for anything but routine service. 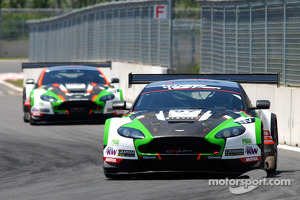 “We lost gearbox pressure which meant it was stuck in fourth gear,” Baird explained, “so we had to pit early. We fixed the problem and put Richie in the car so he could get some laps - not where we want to be, but that’s motor racing..” Sadly for the team, despite rejoining they were not classified after failing to reach 75% race distance.

For the leaders, they left their compulsory stops until the very last minute (the 10-minute pit stop window opened at minute 25), Bell who was still leading by little more than a couple of seconds first in with Caldarelli not far behind, Sawa instead electing to go around one more time.

Hamaguchi was quickly into the McLaren, the team effecting their stop in the allotted 85-seconds, the Japanese driver quickly settling into a rhythm as Sawa pitted to hand over to Weng Sun. The former champion came out of the pits almost side-by-side with the chrome McLaren and just marginally ahead of the hard-charging Liu and Frank Yu in the CRAFT bamboo Racing Aston.

Then the action started..

It began with Jeffrey Lee who rolled to a stop on the back straight just as the pit window closed, his Absolute Racing Audi R8 LMS ultra suffering a clutch failure.

“It was okay off the start, but I could feel something going wrong towards the end of my stint,” team-mate Marchy Lee explained.

“Jeffrey got in, but ultimately the clutch failed, and that was that.”

Officials debated over using the Safety Car to remove the Lee Audi, but in the end they were forced to concede on safety grounds and sent the Safety Car out to pick up the leader.

Initally they picked up the car ahead of the race leading McLaren, officials appeared to wave the slower GTM car through, although Hamaguchi went with him. Sadly that meant the Safety Car was now holding the wrong car at bay, so after a very lengthy period to re-sort the pack, the field was finally let go with nine minutes remaining.

From there the big mover was Frank Yu on long-time rival Weng Sun into the turn ten right hander. “I had been gaining on him and made the last second move to dive up the inside into the corner, but he clearly hadn’t seen me,” Yu explained.

The ensuing contact turned Weng Sun around, the Ferrari then clipped a second time which broke the radiator on the car and ultimately forced his retirement.

“I had to go for it,” Yu added. “The opening was there, but as I got alongside him I could tell he hadn’t seen me but by then there wasn’t much I could do. I feel bad that I turned him around, that wasn’t the intention however there wasn’t a lot I could do.”

“In all the years that Frank and I have raced together, that’s the first time we’ve made serious contact,” Weng Sun confirmed. “It was one of those things. I looked across to see if he was there and I couldn’t see him, so took my line, and that was that.”

Whilst that left Yu in third with a guard rubbing on a tyre, the CRAFT bamboo Racing driver came under fire himself - from CRAFT Racing development driver Matt Solomon, but up front things had also become a whole lot more interesting with former Carrera Cup Asia pilot Anthony Liu latching onto the tail of Hamaguchi.

The Ferrari driver was looking menacing and was pushing Hamaguchi over the final lap, the Japanese driver doing everything he could to make his McLaren the widest car possible. With just three corners to go it looked like he had done enough, but to the surprise of the Clearwater Racing fans, the McLaren spun at turn 10, fortunately without making contact with the walls.

This let Lui through for an outstanding debut victory, with Hamaguchi recovering for second and an ailing Yu third, just hundredths of a second clear of Solomon.

“We expected to be on the podium, but to win is very special,” Lui said post-race.

“We’ve shared a number of cars over the years,” Rizzo added, “but this is our first time in the Ferrari, and already it looks like a good decision.”

Hamaguchi was clearly devastated not to have claimed the win, admitting that the team had struggled with an optimal setup to ensure tyre wear was at a premium throughout the race. “I probably got a little off line whilst I was trying to protect from Anthony, but I just didn’t have the grip,” Hamaguchi explained.

“I’m really sorry for the team, but we’ll go away now and do some work and see what we come up with for tomorrow.”

For Yu, he admitted that he hadn’t really expected to be on the podium prior to the start of the race, and whilst admitting to a deep dive under Weng Sun, explained that he really didn’t have a big range of choices..

“We knew that if Warren [Luff] and I were going to make the podium, that we’d have to fight for it today. I’m disappointed that I hit Mok on the way through, but we had to push today, and I expect we’ll have to do the same again tomorrow.”

Solomon admitted that whilst he knew the podium was in reach and that he had the pace, he could also sense Yu’s desire to keep the Audi at bay.

“Frank drove a very wide Aston,” he said afterwards. “And he was entitled to do so. I tried a couple of times, but he protected his line, so I settled for fourth and a chance to do it all again tomorrow.”

Rui Aguas made it two ‘Spirit of Race’ Ferraris in the top five after a stunning drive through the field after the CPS, whilst Caldarelli and team-mate Sean Fu finished sixth, aided in part by the lengthy Safety Car period, one spot ahead of the NB Team sister car of Max Wiser and Jiang Xin.

Natasha Seatter recovered from a pit-lane speeding infringement issued as a result of team-mate Tacksung Kim’s quick run down pit-lane for his CPS, to finish eighth and rue what may well have been sixth.

“Tack was caught up behind the Lamborghini of Mulagamuwa, so the team brought him in early to break the cycle,” she explained, “sadly though he was over the speed limit in pit-lane and that forced a drive-through for me. Fortunately the Safety Car intervention reduced the overall penalty and I was able to drive back to eighth.”

Arguably the result of the day though was that of former factory-Honda 500cc Grand Prix rider Takuma Aoki. Now a paraplegic, Aoki had qualified his GTM Lamborghini Gallardo LP560 in P3, but was quickly up to speed, taking the class lead immediately after the CPS. The look of elation he had on his face on the podium was priceless, so to his humility during the post-race interview.

“This is my first major international event since I had my accident,” he explained. “I was hoping maybe for a podium, but I only just drove the car for the first time on Thursday, so I didn’t expect this. The car was great, the team was great and the stop went well, I couldn’t have asked for better.”

Aoki in the end was classified 11th outright, one spot back from his team-mate Dilantha Malagamuwa, something which had actually aided his forward progress.

“We’re a little disappointed not to have taken the win today,” GTM runner-up George Chou explained. “During my stint I could see a blue Lambo coming - which was Dilantha - but I couldn’t see the other team car behind which was Takuma and as I moved over to let Dilantha through, Takuma took advantage.

“We have P2 for tomorrow’s second race, so we’re going to go and see what we can find ahead of tomorrow.” Sadly for the team though, it may well be deja-vu, Takuma starting on pole for the second race of GTM, and based on his drive to win on day one, you couldn’t discount the determined Japanese from claiming the double on Sunday..

The second round of the GT Asia Series from Korea will be ‘live-streamed’ around the world, keep tabs on www.facebook.com/GTAsiaSeries for details. Streaming from 2:50pm (KST) Race #2 (GMT +8:00).