Snettertton, Norfolk – A sensational drive in round 16 of the Michelin Ginetta GT Supercup at Snetterton today scored Fergus Walkinshaw his fifth top six result of the 2012 season. On strong form after bouncing back from the technical issues that hampered his chances in Saturday's seven-lap sprint, Walkinshaw suffered more misfortune with a right-rear puncture putting him out of the running for round 17 at the Norfolk circuit. 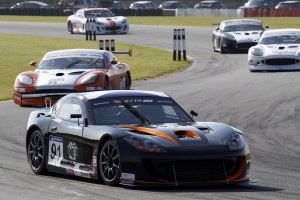 A superb start for the first of two 12 lap races on Sunday saw Walkinshaw immediately in the fray for round 16, heading into turn one on the tail of teammate Josh Wakefield to lie ninth at the end of lap one. Promoted to eighth place following Tom Ingram’s retirement on lap two, Walkinshaw kept his Century Motorsport counterpart within reach, running no more than three tenths adrift.

With Wakefield taking his drive-through penalty on lap four, Walkinshaw turned his attentions to closing the gap to Colin White. The upcoming Scottish star made light work of slashing White’s one second advantage to close within 0.3seconds of sixth place by the end of lap five.

Setting consecutive personal best times on laps six and seven, Walkinshaw kept White in close company until perfectly timing a fantastic move alongside the #78 car at Oggies to take sixth heading into Williams on lap 10. Immediately pulling nearly one second clear by the time he crossed the line, Walkinshaw kept his cool and White at bay to take the flag and secure a third row grid slot for round 17.

“The Century Motorsport guys did a great job of solving yesterday’s issue and I was happier with the car in the first race of the day. I got a good start to put me right in the fight behind Colin [White] and Josh [Wakefield] and I was able to quickly close the gap to Colin," said Walkinshaw.

“Although I had a look out of Murrays on lap eight I thought better of it and instead made my move into Williams on lap 10. Colin tried to counter attack on the last lap, edging alongside through Brundle and Nelson, but I had it covered. It was a good battle.”

Lining up on row three for round 17, Walkinshaw made a solid start but a push wide at Montreal dropped him down to eighth place. Two turns later, drama unfolded when a spinning Colin White on the exit of Hamilton following contact with Jake Hill caused the trailing field to take evasive action.

Thanks to his lightening reactions in taking to the grass, Walkinshaw picked his way through the aftermath to emerge seventh in class and ninth overall heading into lap two. The forced excursion, however, left the #91 car suffering from a severe vibration and Walkinshaw relinquished ninth to a recovering Tom Ingram on lap two.

Despite fighting the car pulling to one side following the first lap incident, the former Ginetta Junior podium winner passed Ginetta G50 leader Mark Davies for eighth overall on lap four while fending off Wakefield once again. As the Century drivers ran line astern in seventh to ninth places, Wakefield made his move on lap six but Walkinshaw soon repaid the favour to then lie seventh.

Just as another result on the cusp of the top six looked a possibility, a right rear puncture blew Walkinshaw’s chances, forcing retirement on the penultimate lap. Walkinshaw commented: “It’s a shame to end the weekend like that after such a strong run this morning. It was pretty hectic on the opening lap and I did well to escape the carnage, but it’s highly probable that the excursion caused not only the vibration but the puncture on the penultimate lap.

“The car was pulling to the left the entire race so it was hard to make any real progress, but I was giving it a good go to see if we could pick up some championship points. It was really unfortunate that the tyre couldn’t hold for just one more lap.”

The next rounds of the Michelin Ginetta GT Supercup at Knockhill will allow the young Scot to return to his homeland circuit in the hope of adding to his top six result tally on August 25&26.