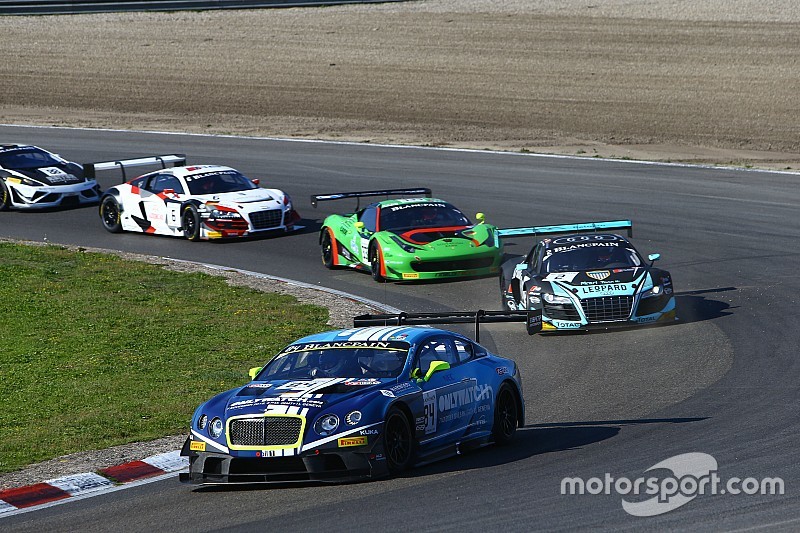 No less than 11 manufacturers are represented on this year's starting grids, with four of them bringing brand-new machinery to the party. Add to that an ever increasing number of top notch drivers - from Grand Prix and Le Mans-winners to the best GT drivers in the world - and it is clear that the upcoming season will be one you cannot afford to miss. Here's a look at this year’s stellar cast:

Oman Racing Team again puts its trust in the stalwart Aston Martin Vantage GT3 and is determined to be among the frontrunners in the Blancpain GT Series Endurance Cup. Ahmad Al Harthy, Devon Modell and Aston Martin factory driver Jonny Adam will share the driving duties in the blue-and-white machine.

Reigning Blancpain GT Series Belgian Audi Club Team WRT will again bring the largest number of Audi R8 LMSs to the grid. With five cars in the overall championship, the Belgian squad is among the favourites for the overall teams' and drivers' titles, but they will face strong competition, not least from other Audi teams ISR, Sainteloc Racing and Phoenix Racing. The names of the drivers have a familiar ring to them, with former (or reigning) champions such as Laurens Vanthoor, Christopher Mies, Christopher Haase and Robin Frijns. Stalwarts like René Rast, Markus Winkelhock and Frank Stippler are back as well, while Sergio Jimenez has also switched to Audi for the entire season. Notable newcomer to the series is former F1 driver Will Stevens, as are youngsters Rodrigo Baptista, Nicolaj Møller Madsen, Markus Pommer and Dries Vanthoor, Laurens' younger brother.

Bentley Team M-Sport is the sole representative of the Crewe manufacturer, but the past two seasons of the Blancpain GT Series Endurance Cup have shown that Malcolm Wilson's squad is often among the frontrunners. This year will see them also compete in the Blancpain GT Series Sprint Cup in an effort to emulate HTP Motorsport's performance of 2015 when they won the drivers' title with Maxi Buhk and Vincent Abril. The latter has joined Team M-Sport for the 2016 season, becoming the new team-mate of traditional Bentley Boys Guy Smith and Steven Kane in the Blancpain GT Series Endurance Cup. Team Parker Racing now has two Continental GT3s in their pit box as well, vying for Pro-Am Cup and Am Cup honours in the Endurance Cup. Am Cup champion Ian Loggie is again one of their drivers.

The Bavarian brand is one of the four manufacturers represented by a new model, with the BMW M6 GT3 replacing the highly successful BMW Z4 GT3. Several teams have put their trust in the new M6 GT3, with Rowe Racing competing in the full Blancpain GT Series with two cars. Philipp Eng and Alexander Sims will share one of the white-and-yellow M6 GT3s, while the other is in the capable hands of Stef Dusseldorp. Boutsen Ginion Racing is another team that will enter the new M6 GT3 for the full season, with ROAL Motorsport racing with one car in the Blancpain GT Series Endurance Cup.

The Prancing Horse will be present in the 2016 Blancpain GT Series with two different models: the familiar 458 Italia GT3 and the long-awaited new 488 GT3. AF Corse, Black Pearl by Rinaldi Racing and Rinaldi Racing each have one car competing in the full season. The latter - again with Norbert Siedler, Marco Seefried and Rinat Salikhov at the wheel - will certainly attempt to emulate their excellent 2015 campaign. In the Blancpain GT Series Sprint Cup there will be five Ferraris and in the Blancpain GT Series Endurance Cup no less than 13. Other teams putting their confidence in Modena's best are Classic & Modern Racing and Kessel Racing.

Reigning Pro-Am champions Duncan Griffin and Matt Cameron are again among the Ferrari drivers, as is their predecessor Andrea Rizzoli. 2014 Gentlemen Trophy champions Peter Mann and Francesco Guedes make their comeback as well, but do not be surprised if a large part of the attention goes to the #53 AF Corse Ferrari, in which former Formula 1 drivers Giancarlo Fisichella and Olivier Beretta will take turns sharing the car with Lorenzo Bontempelli and Motoaki Ishikawa.

Emil Frey Racing took much motivation into the winter months after ending the 2015 season with a class win at the Nürburgring round of the Blancpain GT Series Endurance Cup. Their Jaguar should be even more competitive this year and fighting for further class wins.

After its sensational debut last year, taking the win at the opening round of the Blancpain GT Series Endurance Cup in Monza, interest in the Lamborghini Huracan GT3 rapidly grew. This results in five Huracans competing in the full 2016 Blancpain GT Series (courtesy of Grasser Racing and Attempto Racing), six in the Sprint Cup and entries of ARC Bratislava, Barwell Motorsport, Konrad Motorsport and Ombra Racing make it nine in the Endurance Cup, together with the single Gallardo FL2 R-EX of AF2 Motorsport. Plenty of Lamborghini factory drivers, such as Fabio Babini or Jeroen Mul, will share the cars with young and upcoming talents or experienced GT drivers, like Jeroen Bleekemolen or former Total 24 Hours of Spa winner Andrea Piccini.

One of the most awaited cars for the 2016 season must be the Mercedes-Benz AMG GT3. AKKA ASP and HTP Motorsport each take two to every round of the Blancpain GT Series, and three to every round of the Blancpain GT Series Sprint Cup. In the Endurance Cup there will be seven AMG GT3s, with Black Falcon and Team Zakspeed entering two and one cars respectively. One of Zakspeed AMG’s drivers is former Champ Car race winner Alex Tagliani, who will be making his Blancpain GT Series debut this year in the company of his Canadian countrymen Jean-Frédéric Laberge and Darryl O'Young. To prove that there is still life in the predecessor of the AMG GT3, Classic & Modern Racing enters the single SLS AMG GT3.

With Nissan-drivers Katsumasa Chiyo, Alex Buncombe and Wolfgang Reip taking the drivers' title in the 2015 Blancpain GT Series Endurance Cup, expectations are high for the GT-R Nismo GT3. Nissan GT Academy Team RJN will enter two cars for the whole season, with former champions Alex Buncombe (Sprint Cup and Endurance Cup) and Lucas Ordonez (Endurance Cup) sharing the cars with winners of the GT Academy and former Japanese F3 champion Mitsumori Takaboshi. Ricardo Sanchez as back in their line-up, as is Sean Walkinshaw.

Stephane Ratel (Founder and CEO of SRO Motorsports Group): "“The success and continuing growth of GT3 racing has been clear for all to see in recent years, but we are still very impressed - and very happy - with the overwhelming interest in the Blancpain GT Series. With a record number of entries, a plethora of new cars and the best GT drivers in the world on the starting grid we have plenty to look forward to in the upcoming season. I can't wait to be at the start of the first race. I would also like to take this opportunity to thank our loyal partners, especially Blancpain and Pirelli, without whom this would not have been possible.”

Mercedes "at the very worst end" of tyre problems