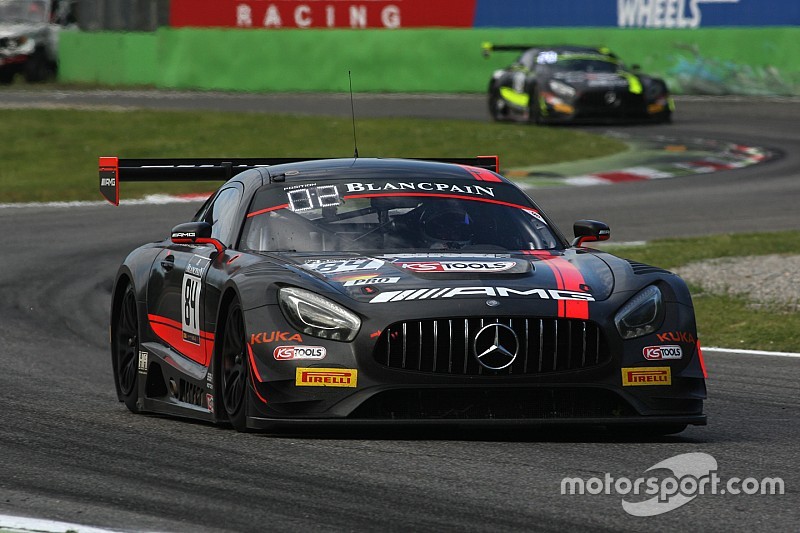 Great presentation by all HTP drivers with outstanding performances

Silverstone, England / Nürburgring, Germany, 13th – 15th May 2016 — The AMG-Team HTP Motorsport had every reason to celebrate at the double race-weekend for the Blancpain GT Series Endurance Cup and the VLN Championship. Following two second-place podium finishes in the Blancpain GT Series, the team secured a fantastic race victory at the Endurance Cup in Silverstone. At the third VLN race and therefore the last chance to prepare for the 24h-race, the German squad finished in P7 after a good strategy.

The AMG-Team HTP Motorsport set the perfect conditions for a successful race with fourth place in qualifying. Dominik Baumann (A) had a good start from the second row in the #84 Mercedes-AMG GT3. Following the fastest lap of the race by then, he handed the car over to his team-mate Jazeman Jafaar from third position. The young Malaysian controlled his stint and managed to take the lead on lap 36: First, he overtook the #16 Lamborghini, only to take the front spot from the #1 WRT Audi soon after. Despite a lot of traffic and a slightly chaotic Safety-Car-Period, Maximilian Buhk (GER) kept the lead in the last stint and crossed the finishing line as the winner by one second.

The #85 Mercedes-AMG GT3 finished in a competitive 5th place in Sunday´s race, following a string of bad luck during recent race meetings. The Austrian Clemens Schmid set the sixth-best lap-time and started the race from the third row on the grid. Schmid was able to push well right from the start making up some ground. After an hour into the race, he handed the car over to his English team-mate Luciano Bacheta from third place. The Englishman, who debuts in GT racing this year, showed a good performance at this home race and competed in the Top-4. Indy Dontje (NDL) had a great nose-to-tail battle with the #99 Rowe BMW and came home in fifth place.

The #84 drivers are now leading the Endurance Cup by 11 points, whilst Buhk and Baumann have also taken back the lead in the overall standings by 13 points.

“All in all, it was a fantastic race and we are very happy with the result", says Norbert Brückner, Team Principal AMG-Team HTP Motorsport. “We are not just happy about the victory, but also for the #85 Mercedes-AMG GT3 for securing a good position. The drivers all did a really good job and the results are the perfect birthday present to our Team Organiser, Brice Bosi. Everyone from the team would like to congratulate him once more."

Impressive charge through the field at third VLN round at Nürburgring

After a disappointing 17th place in qualifying for the third VLN round, the AMG-Team HTP Motorsport managed a great race to catch up. Renger van der Zande came in for an early stop at the end of lap four, at which time he was already running in P9. Stefan Mücke took over the wheel of the #37 Mercedes-AMG GT3 from fourth place and was able to keep the position for a long time. Christian Hohenadel drove the last stint and the team tested a few different Setups. The car finished the four-hour-race in a competitive seventh position. All preparations for the upcoming 24h-race have been successfully completed.

Maximilian Buhk (GER) - #84 Mercedes-AMG GT3: "I would like to thank my team and my driver colleagues. We all did a great job today and the pit stops were perfect. I was able to push the whole distance and tried not to make any mistakes while overtaking backmarkers. Even after the Safety Car, I was able to keep a small gap to the car in second place."

Dominik Baumann (A) - #84 Mercedes-AMG GT3: "The start was good and I managed to stay out of trouble, which was not a problem coming from the second row on the grid. It was a bit difficult with all the traffic today, but in the end we can look upon a perfect race."

Jazeman Jafaar (MAL) - #84 Mercedes-AMG GT3: "Maxi drove on new tyres and was able to control the race. Our car showed a great performance on full fuel and it was comfortable to drive. We had a strong package for the race and I am very happy about the win."

Clemens Schmid (A) - #85 Mercedes-AMG GT3: "I had a good start and was able to attack from the start. Once I passed the BMW from Martin, I drove good lap times. It is really nice for everyone in the team and my team-mates to have come home with a good Top-5 result."

Luciano Bacheta (GBR) - #85 Mercedes-AMG GT3: "We had a minor problem at the pit stop with the front right, but the little time we lost, we made up on the track again. I am pleased with my performance and it feels really good, to have such a good result at my home race."

Indy Dontje (NDL) - #85 Mercedes-AMG GT3: "We had a good race and we are pleased with P5. I had a good fight with Philipp Eng in the BMW, but I was not able to pass him. After all the bad luck recently, it is nice to have this good result."

Renger van der Zande (NDL) - #37 Mercedes-AMG GT3: "We were here to test and not to win the VLN race, therefore I did not take any risk and only started pushing after my pit stop. It was a really good race and the speed was great. I think, we have a really good package for the 24h-race."

Stefan Mücke (GER) - #37 Mercedes-AMG GT3: "It was quite a turbulent race with a lot of dirt on the track and many double-yellow phases, especially in the middle part of the race, but we were lucky not to damage our tyres. We managed to progress bit by bit. The car ran really well."

Christian Hohenadel - #37 Mercedes-AMG GT3: "Overall, we managed to drive a lot of mileage, which is important for the 24h-race. The car showed a good pace, we tested a few things and I think, we are ready for the 24h-race."

Group N set to be revived at Spa 24 Hours