Major involvement from the defending champs in BES and BSS.

The long winter break is soon coming to an end, but before racing activity resumes on track, it’s time to present the 2014 racing programmes. The Belgian Audi Club Team WRT invited the press today at its premises in Baudour to unveil all details of its racing commitments for this year.

The Belgian squad, which in the last three seasons has collected on the international GT scene no less than three double titles (Drivers’ and Teams’) in the Blancpain Endurance Series (2011-12) and in the FIA GT Sprint (2013) on top of winning the 2011 Total 24 Hours of Spa-Francorchamps, is determined to further enrich its trophy collection, and is stepping up its efforts. 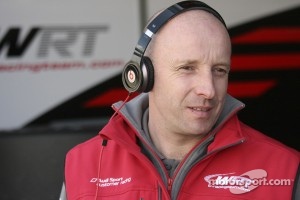 Team Principal Vincent Vosse explained: “Every season is a new challenge, it’s almost like starting everything from scratch. What we have achieved in the first four years of activity of the team, though, is an excellent basis to build upon and I am delighted to see how much interest we are generating among drivers, sponsors and partners. The result is that we can today present a very comprehensive 2014 racing programme. We are extremely motivated and determined to fight for the championships in both the Blancpain Endurance and the Blancpain Sprint championships, and we are also very eager to be again on the top spot of the podium at the Total 24 Hours of Spa-Francorchamps.”

In the Blancpain Endurance Series, the Belgian Audi Club Team WRT will enter three Audis R8 LMS ultra. Car # 1 will be entrusted to Laurens Vanthoor and two new-comers to the team, Germany’s Marc Basseng, a reputed GT and touring car driver, and Brazilian young gun César Ramos (24). Car # 3 will be in the hands of Christopher Mies, Frank Stippler and Britain’s James Nash (28) who joins from the WTCC. The third car, which will sport #4, will be shared by Team WRT’s co-partner Yves Weerts, Frenchman Jean-Luc Blanchemain and Belgium’s Christian Kelders.

For the Total 24 Hours of Spa-Francorchamps, the stellar GT event which is also a round of the Blancpain Endurance Series, there will be four cars. Mies-Stippler-Nash and Weerts-Blanchemain-Kelders are already confirmed while the line-ups of cars #1 and #2 will be announced on due course.

In the Blancpain Sprint Series, the three Belgian Audi Club Team WRT cars will be entrusted to Laurens Vanthoor-César Ramos, René Rast-Enzo Ide and a duo of very talented young drivers such as Frenchman Vincent Abril (19), who joins from the GT Tour, and Poland’s Mateusz Lisowski (23), who last year won the VW Castrol Cup.

Team WRT will prepare and run a fourth Audi R8 LMS ultra, entered by G-Drive Racing, for Russian GT and sportscar specialist Roman Rusinov and WRT’s stalwart racer Stéphane Ortelli. This car will participate to the 24 Hours of the Nürburgring, with Sweden’s Edward Sandström and a fourth driver to be designated joining Ortelli and Rusinov.

As a consequence of this extended programme, Team WRT has strengthened its technical and management staff, notably by hiring Thierry Tassin, the well-known former driver and manager.

Vincent Vosse commented: “There have been quite a few changes in our driver line-ups and while mixing youth and experience remains our guiding principle, it is clear that we are introducing a good deal of fresh blood into the team, which is very exciting, as we strongly believe in youth and talent. This is true for drivers but also for team members, and I am also very proud of the fact that a number of girls have joined our team, including one mechanic and our new data engineer. I am also very happy to have had the possibility to hire an expert manager as Thierry Tassin, who will share with Pierre Dieudonné the duties of sporting director. While Pierre will take care of the Pro cars, Thierry will be responsible of the G-Drive-livered Audi and the Belgian Audi Club machines entered in the Gentlemen and Silver Cup categories according to the racing schedule.”

24 Hours of the Nürburgring

Insight Racing all set for 2014

The new LMP2 star who turned heads at Le Mans