Blancpain GT series to be broadcast in North America

The Blancpain GT series will be airing in North America with CBS Sports.

SRO Motorsports Group is very pleased to announce that, through an agreement entered into by its North American distribution partner, Performance Communications Group ( PCG ), an agreement has been reached with CBS Sports Network for same-day coverage of the 2014 season of the Blancpain GT Series, as part of the long-running CBS Sports Spectacular series.

CBS Sports Network the 24-hour home of CBS Sports, airs more than 400 live events annually and is widely available in the United States and Canada through local cable, video and telco providers and via satellite on DirecTV Channel 221 and DISH Network Channel 158. For more information, and to access the CBS Sports Network channel finder, go to www.cbssportsnetwork.com. 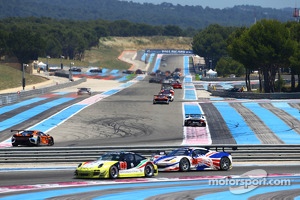 Stephane Ratel (Founder and CEO of SRO Motorsports Group): “At SRO we are extremely happy to have reached this agreement with CBS Sports Network. In addition to the existing coverage, this means that the Blancpain GT Series is now televised live, or same day as live, across the globe - further proof that our series provides attractive and exciting racing and is appreciated by race fans worldwide.”

Audi vs. BMW in the opening hours of the Total 24 Hours of Spa