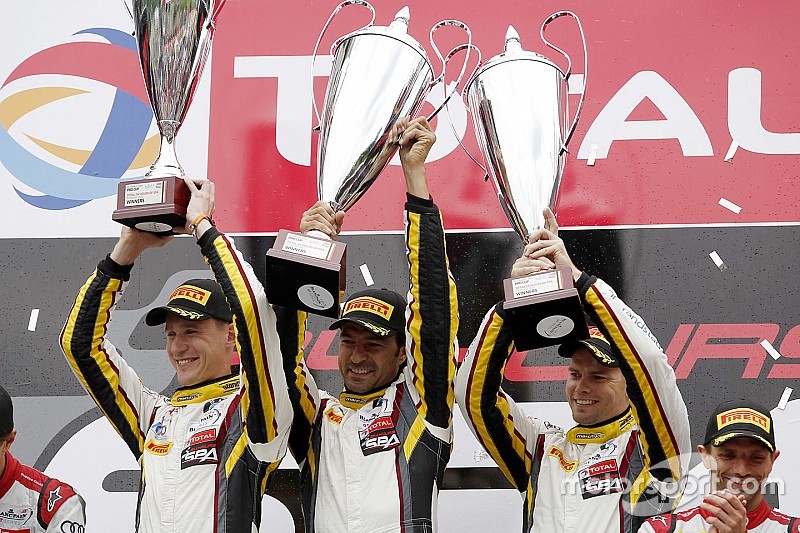 It was a popular victory for the local Marc VDS squad which had been close to victory in previous editions of the race. The winners broke free from a four way battle for the lead in the 20th hour, shortly after its sister BMW Z4, driven by Dirk Werner spun in to retirement with a seized engine.

Catsburg, who was the stand-out performer of the race, overtook Ortelli's Audi at La Source mid-morning and soon opened up a significant buffer, from where the Z4 then controlled the race as the Audi had no answer on pace or strategy.

"I am speechless," said Catsburg. "We have been trying so long and now finally in the last year of the Z4 we have managed to do it. Thanks to my team and my team mates. It will take time to sink in but we will have a big party tonight."

Another Audi, the No.5 Phoenix Racing-entered Audi R8 LMS driven by Nicki Thiim, Christian Mamerow and Christopher Mies rounded out the podium after capitalising on late race issues for the No.99 Rowe Mercedes.

An alternator problem claimed the Stef Dusseldorp, Nico Bastian and Daniel Juncadella Mercedes SLS AMG in the penultimate hour to heap heartbreak on the German team after they spent the majority of the race in the leading group.

The second of the Phoenix Audis crewed by former Le Mans winners Marcel Fassler, Andre Lotterer and Mike Rockenfeller came home in fifth place. Rockenfeller survived a heart-stopping spin at Eau Rouge in the morning for the car to come home despite a succession of early race issues.

The defending champions, Rene Rast, Markus Winkelhock and Laurens Vanthoor had a difficult race and could only finish 21st after a series of issues, the most significant of which was a rare early evening accident at Stavelot for Vanthoor.

As ever, there was heartbreak in the final stages with the ROAL Motorsport BMW Z4 of Alex Zanardi, Bruno Spengler and Timo Glock retiring just before the final hour began.

AF Corse ensured that Maranello's celebrations echoed from Spa to Budapest and back as the No.47 Ferrari 458 GT3 dominated the PRO-AM class.

Gianmaria Bruni, Alesandro Pier Giudi, Pasin Lathouras and Stephane Lemeret celebrated a two lap win after a faultless performance saw the car lead the majority of the race. They also took the chequered flag in a superb fourth place overall.

Making it a Ferrari 1-2 was the No.55 AF Corse entry with Matt Griffin, Duncan Cameron, Davide Rigon and Francisco Guedes securing the runners-up position. The points accrued by Griffin and Cameron ensured the familiar English/Irish duo stretched out their lead in the Pro-Am points standings.

Completing a great day for BMW and securing third position in PRO-AM was the Ecurie Ecosse BMW Z4. Run by Barwell Motorsport, the Alexander Sims, Oliver Bryant, Devon Modell and Alastair McCaig had a flawless run to a highly merited seventh overall.

The British Team Parker Audi R8 LMS took a crushing victory in the AM class with Julian Westwood, Ian Logie, Callum McLeod and Benny Simonsen enjoying a near perfect run to a two lap win and take a fine 14th position overall.

The final round of the 2015 Blancpain Endurance Series takes place at Nurburgring in September.