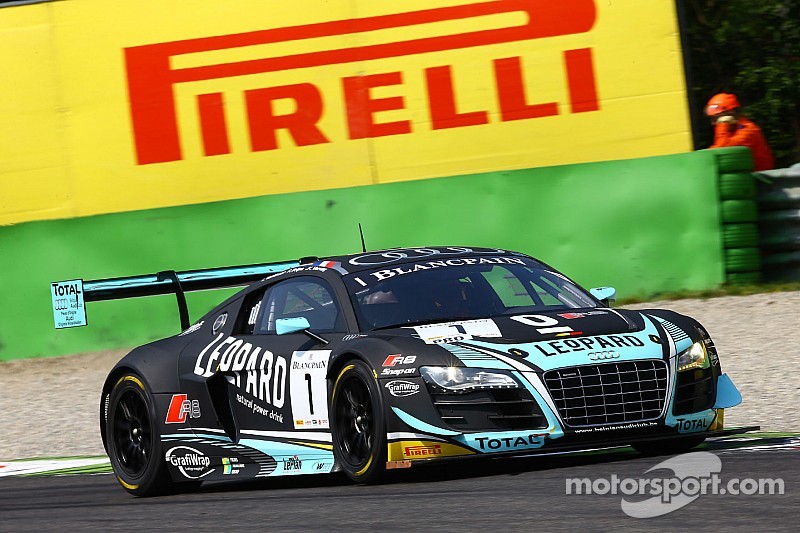 Laurens Vanthoor, Robin Frijns and Jean-Karl Vernay took an excellent third overall (and 2nd in the Pro Cup) after a solid and consistent race in the Blancpain Endurance season-opener.

It was a great start of the season in the Blancpain Endurance Series too for the Belgian Audi Club Team WRT, although the ultra-fast track of Monza is certainly not the most favorable circuit to the Audis R8 LMS ultra and despite the 59-car strong field. Laurens Vanthoor and his new team mates Robin Frijns and Jean-Karl Vernay took an excellent third overall (and 2nd in the Pro Cup) after a solid and consistent race.

The result became a 2nd overall (and first in the Pro Cup) after the winning Lamborghini was disqualified. The good result was rounded by the 5th position (3rd in the Pro Cup) of the brand new Audi R8 LMS, driven by Frank Stippler-Stéphane Ortelli-Nico Müller on its very racing debut on the international scene. The third trio (Richelmi-van der Linde-Mies) was less lucky, as they had to retire mid-race with a brakes issue.

We can be satisfied and there was little more we could do against cars much faster on the long straights.

Belgian Audi Club Team WRT team principal Vincent Vosse was satisfied and relieved at the end of the day: “We leave Monza with heavy points, which was the objective, and a podium finish, which is unexpected, as Monza is notoriously one of the most difficult tracks for us”, he reckoned. “We can be satisfied and there was little more we could do against cars much faster on the long straights. Everybody did an excellent job and we are very happy also of the good result of the new R8 LMS. It had a number of teething little problems, also during pit stops, as it could be anticipated, but it is an encouraging debut and we collected very useful data upon which we will base the development work in the weeks and months ahead”.

Free practice and qualifying ran smoothly for the three Belgian Audi Club Team WRT cars, which made it to the top 15 on the grid, something unusual at Monza. Laurens Vanthoor qualified #1 in ninth, Müller put #2 in P14 and Mies #3 in P15. Except a minor issue with an engine ancillary part in free practice on car #1, nothing special was to be reported, with the new R8 LMS “growing” well throughout the sessions.

Car #1 had a brilliant race, always in the top group. Jean-Karl Vernay gained two positions at the start to run seventh in the opening laps, and even sixth for a moment, in the middle of a fierce duel with the Bentley of Smith. After the pit stop, it rejoined in fourthwith Robin Frijns at the wheel, the young Dutchman having to concede one position to GT expert Matt Griffin. It then stabilized in P5 during the last stint, with Laurens Vanthoor gaining two positions in another of his usual very strong final rushes, in the 25 minutes of the race left after a long safety-car period. He crossed the line in P3, which later became P2.

The new Audi R8 LMS in Audi Sport Team WRT colors had a very consistent race, despite some minor troubles, with Frank Stippler running 10th most of his stint and Stéphane Ortelli gaining two positions in the second fraction. Nico Müller brought home the rookie car to a final sixth place overall on the track and ahead of the other new car.

Car #3 was also bound to a good result as it was running steadily in the top 20, first with Stéphane Richelmi, who took the start, and then with South African rookie Kelvin van der Linde, but unfortunately it got stopped by mid-race after 58 laps. “It’s a brakes problem and we don’t want to take any risk here at Monza”, explained Technical Director René Verbist as the car was retired.

The additional Team WRT entry, finished 13th in the Pro-Am Cup, with Bottemanne-Koebolt-Schothorst recovering well from an accident in qualifying.

The highly-competitive Blancpain Endurance Series will be back on 23-24 May with another round rich in tradition at Silverstone. Before that, the Belgian Audi Club Team WRT will already visit the UK, for the Sprint Series round at Brands Hatch on 9-10 May.

Drivers’ provisional standings after Round 1 of 5 (Pro Cup):

Teams’ provisional standings after Round 1 of 5 (Pro Cup):