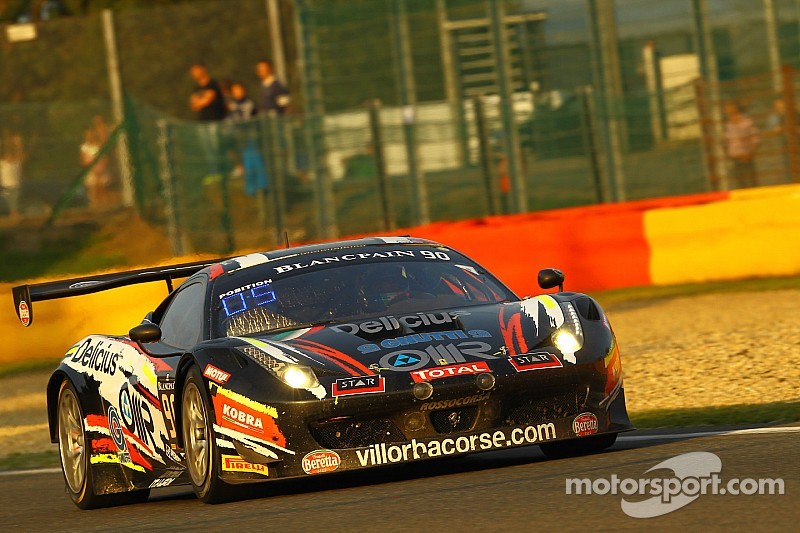 Now team and drivers are first in both the standings with only one event to go.

Spa (Belgium), July 27, 2014. Scuderia Villorba Corse came in fifth position in the Pro-Am category (15th overall) at the Total 24 Hours of Spa and clinched crucial points for both the driver and the team standings. In the fourth round of the Blancpain Endurance Series Italian team led by Raimondo Amadio dominated the Pro-Am Cup race all through the night but then the trouble free run of the #90 Ferrari 458 of Andrea Montermini, Francesco Castellacci, Stefano Gai and Andrea Rizzoli came to an end when the car had a 25-minute pitstop to solve a problem with the starter of the engine.

Villorba crew started the Belgian “marathon” from the 12th row on the grid on Saturday afternoon and was capable to recover up to Pro-Am lead and top-ten overall positions. During the night, at 6th and 12th hour of the race, Villorba Corse was second and first respectively, clinching the first heavy points of the weekend. Then, during the 18th hour, on Sunday morning came the starter issue.That stop forced the whole squad to a very tough comeback from eighth in Pro-Am, ending the Spa 24 Hour in fifth position after last six hours of the race. Thanks to these results Castellacci, Gai and Rizzoli have increased their lead in the Pro-Am driver standings while Villorba Corse jumped on top of the team standings. This double leadership puts the team in pole position for the season finale of the Nurburgring 1000, another legendary race, to be held in September.

“It was a great weekend for us - says Amadio, Team Principal -; team work was perfect and everyone gave his best. Despite the problem during that pitstop we are very happy with this first experience here for the 24 Hours. We dominated until Sunday morning thanks to a perfect night strategy. Win will come soon.”