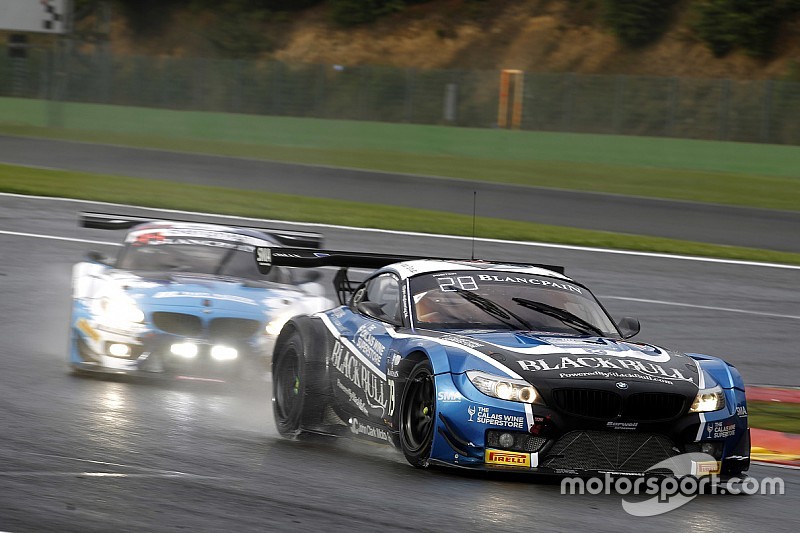 Ecurie Ecosse Powered By Black Bull’s Alasdair McCaig, Devon Modell, Oliver Bryant and Alexander Sims saved their best Blancpain Endurance Series performance of the season for when it mattered most last weekend (July 21-26) after scoring a Pro-Am podium finish at the 24 Hours of Spa for the second year running.

The legendary Scottish squad took the chequered flag third in class and an incredible seventh overall at the world’s greatest standalone GT race 12 months on from finishing second in the same category. The event’s 67th running arguably attracted its most competitive ever entry, which featured the cream of the world’s GT teams, manufacturers and drivers. That made Ecurie Ecosse’s achievement of being the first British and non-factory outfit home, as well as leading in the early stages, all the greater.

A tricky first half to the Barwell Motorsport-run team’s European campaign ensured this year’s race was less critical in terms of championship points. Instead, the focus was on realising the BMW Z4 GT3’s potential in what will likely be its final hurrah at Spa.

We actually lead the race outright at one point, which was a real highlight.

Sims, who currently leads the British GT standings for Ecurie Ecosse, had been drafted in to the regular Blancpain Endurance Series line-up for its longest race of the season and immediately proved what might be possible by progressing through to Friday’s top-20 Super Pole session. A brake binding issue ultimately scuppered his hopes of setting a representative time, but the team was nevertheless confident that its raw speed would be evident come raceday.

That was certainly the case in the treacherously wet conditions at the start on Saturday when the BMW factory driver picked up six places on the opening lap alone. Incredibly, his combination of speed and Barwell’s bold strategy call meant third in class had become first overall by the time his triple stint was over after three hours, most of which was spent in the top-three overall.

Central to the team’s progress was its decision to defy prevailing thinking up and down the pit-lane and remain on wet tyres instead of changing to slicks. And, sure enough, it wasn’t long before that inside knowledge was proven correct, the rain falling north of the circuit in Liege subsequently soaking Spa for a second time.

That evening’s cold, damp-but-drying conditions proved much less favourable however, and as the BMW struggled to generate tyre temperature and grip following its subsequent switch to slicks so it soon slipped down the order to the lower reaches of the Pro-Am top-10. The team didn’t give up though and through the combined efforts of Bryant, Modell and McCaig – the latter’s total of six hours behind the wheel characterised by immaculate driving – the Z4 was soon back in the hunt.

It was that combination of speed and accuracy from all four drivers allied to Barwell’s well-drilled pit crew that perhaps made the biggest difference. Not only did the car enjoy a problem-free 24 hours, but it also returned to parc ferme post-race without a scratch to show for its work. 23 perfectly executed pit-stops and no time spent in the garage whatsoever also played its part in an all-round team performance.

While third in class was an undoubtedly fantastic result, the greatest achievement might well have been coming home seventh overall amongst a 58-car field and behind just four of the 23 all-professional driver crews that started the race.

Alasdair McCaig: “Finishing on the podium at the 24 Hours of Spa is very special indeed. It’s the biggest and most competitive GT race in the world and I am delighted to have been able to contribute to that success. Mark Lemmer and the Barwell squad have yet again proven they can do a top job in what were tricky conditions at times, and provided Ecurie Ecosse with a car that ran faultlessly. My team-mates Devon, Olly and Alexander did a fantastic job and we are all now looking forward to the remainder of the season and pushing hard for more top results.”

Devon Modell: “It’s been a tough season but we’ve come to Spa and absolutely nailed it! I don’t think there was a lot more we could have done to be honest. The car ran faultlessly, which is testament to the hard work put in by everyone at Barwell Motorsport. Alexander did a great job at the start in those tricky conditions and Olly, Alasdair and I maintained the good work thereafter. It’s such a brilliant track and event: the level of drivers and teams competing wouldn’t look out of place at any of the world’s biggest sportscar races.”

Oliver Bryant: “What a fantastic result for Ecurie Ecosse! Seventh overall for the second year in a row and third in Pro-Am against the toughest GT competition in the world is something we can all be very proud of. None of this would be possible without the support of our loyal sponsors and the first class efforts of Barwell Motorsport.”

Alexander Sims: “The 24 Hours of Spa is one of the biggest GT3 races in the world and so to get a podium in class and seventh overall is seriously impressive. The entire team worked faultlessly throughout the weekend so it was a just reward that we brought it home without a scratch and, as such, without any time lost in the pits. The changing conditions during the first six hours really made it difficult for the car and drivers but we were able to capitalize on this and use it to our advantage. We actually lead the race outright at one point, which was a real highlight. The field in Pro-Am was incredibly competitive this year as well so the result means even more to us knowing the opposition that we were up against.”

Mark Lemmer, Barwell Motorsport Team Principal: “It's a great feeling to achieve a podium against world class opposition, especially at Spa. The driving, pit-stops, car preparation and strategy were all faultless. I couldn’t have asked for anything more from the whole team. The fact we were able to run in the overall podium places during the opening three hours was an amazing feat given the level of competition at Spa.”

Ecurie Ecosse and Barwell Motorsport will be back in British GT action with Sims and Marco Attard at Brands Hatch this weekend (August 1/2), while its Blancpain Endurance Series campaign concludes at the Nurburgring in Germany on September 19/20.