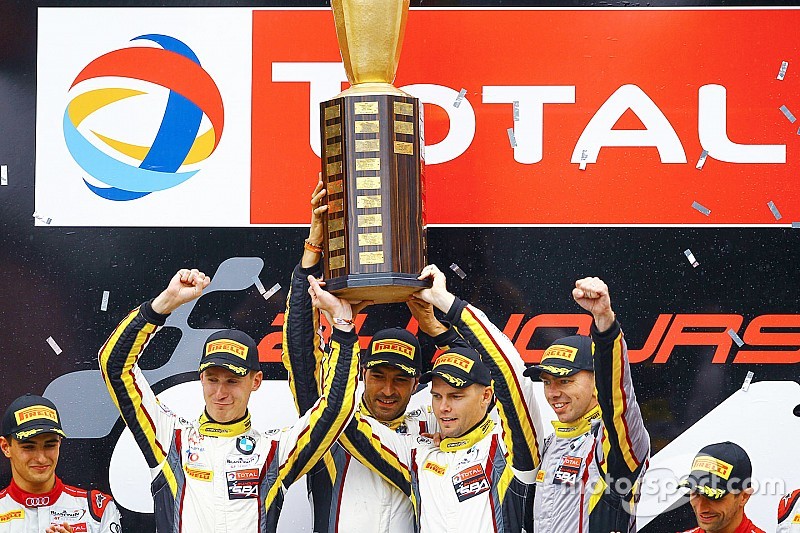 In their sixth attempt at the Total 24 Hours of Spa, the Belgian BMW Sports Trophy Team Marc VDS finally took their first win on home soil.

The #46 BMW Z4 driven by Nick Catsburg, Markus Palttala and Lucas Luhr completed 536 laps, taking fastest lap for good measure, crossing the line a lap ahead of the #2 Audi Sport Team WRT in a typically eventful race in changeable weather.

Third was the #5 Audi Sport Team Phoenix, which claimed the last podium spot one hour from the end when the #99 Rowe Racing Mercedes was pushed into the box with a broken alternator. All other candidates for the win lost time due to technical problems or completely fell by the wayside after an incident, especially during the tricky conditions of the early hours.

In Pro-Am, the #47 AF Corse Ferrari of Bruni, Pier Guidi, Lémeret and Lathouras moved up during the night to eventually take an emphatic class win and fifth overall to boot. The sister car, the #51 AF Corse Ferrari of Guedes, Rigon, Cameron and Griffin finished two laps down in second, but that was more than enough for Duncan Cameron and Matt Griffin to wrap up the 2015 Pro-Am Cup drivers' title in the Blancpain Endurance Series. AF Corse did the same in the teams' classification.

The Am Cup was dominated by the #24 Team Parker Racing Audi, which led almost from start. Loggie, Westwood, McLeod and Simonsen crossed the line with a two lap advantage over a very consistent #56 Attempto Racing Porsche and the #111 Kessel Racing Ferrari.

The 67th edition of the Total 24 Hours of Spa commenced in torrential conditions, with cautious polesitter Frank Stippler in the #2 Audi Sport Team WRT immediately losing out to the pair of Von Ryan McLarens. It was not long before the first incident caused a safety car intervention and after a second, much longer neutralisation of the race, varying strategic choices meant that the positions at the front changed almost continuously.

Only when darkness fell over the Ardennes track did it become clear that the #99 Rowe Racing Mercedes had made the best of the circumstances and was leading the race, helped by the fact that last year's winner Laurens Vanthoor made mistake when in front and lost over five laps while the necessary repairs were performed on the #1 Audi Sport Team WRT.

Not that the drivers of the Rowe Racing SLS could get comfortable however. After eight hours of racing, the top-6 was occupied by cars from six different manufacturers, and at one point during the night, all six were separated by just 50 seconds.

This win means everything to the Marc VDS Team.

At dawn, the #99 Rowe Racing Mercedes was still leading, but the competition had thinned considerably. Only the two BMW Sports Trophy Team Marc VDS cars and the #2 Audi Sport Team WRT were still in realistic contention, and when the SLS had a lengthy pitstop to change brake discs and pads, the #45 BMW Sports Trophy Team Marc VDS BMW took the lead.

The leading car of the Belgian squad had enjoyed an incident-free race up until then, but in the 18th hour an engine problem caused a spectacular locking of wheels on the #45 at Bruxelles Corner. Although Dirk Werner managed to keep the car out of the guard rails, he was unable to get the car back to the pits. For a while, things looked bleak for the Belgian squad, but the sister car soon stepped up to the plate to take the lead away from the #2 Audi Sport Team WRT. The #46 car of Catsburg, Palttala and Luhr – which had been outside the top-30 after a wrong tyre gamble in the opening hours – had lost ground due to a drive-through penalty for overtaking under yellow flags, but some blindingly quick stints (Catsburg set the fastest lap of the race at sunrise on Sunday morning) propelled the car into the lead with 5,5 hours to go.

After fending off a spirited attack from Nico Bastian after a pitstop, the #46 held on to the lead until the end, eventually beating the #2 Audi Sport Team WRT of Ortelli, Stippler and Müller by one and the #5 Audi Sport Team Phoenix of Mamerow, Mies and Thiim by two laps.

There were tears meanwhile in the Rowe Racing box, because an almost certain podium finish slipped through their fingers with an hour to go. The fact that - thanks to the points scored after six and twelve hours - Nico Bastian and Stef Dusseldorp are now second in the drivers rankings in the Blancpain Endurance Series (nine points behind Ortelli and Stippler) was of little or no consolation.

Rowe Racing was not the only squad to suffer heartbreak in the final hour of the race. The #9 Roal Motorsport BMW of Timo Glock, Bruno Spengler and Alex Zanardi, which had been set for a convincing top-10 finish, were also forced to stop with a smoking engine.

The fight for the win in the Pro-Am Cup was no less exciting than the one in the Pro Cup. The AF Corse Ferrari cars which had shown so well in practice and qualifying started the race as the big favourites, but the BMW teams were determined not to make it easy for them. When the #52 AF Corse Ferrari of Toni Vilander lost it’s brakes at Bruxelles in the early stages, the BMW chances increased, but at the end of 24 hours, the AF Corse machines still managed to finish first and second. After a quiet start, the #47 Ferrari of Gimmi Bruni, Alessandro Pier Guidi, Pasin Lathouras and Stéphane Lémeret was able to stretch its lead out to two laps, even crossing the line in fourth overall. It also made Lémeret the first of the Belgian drivers in the Ardennes endurance classic.

But despite missing out on the win, it was all smiles for the drivers in the #51 AF Corse Ferrari as well. With the help of Francisco Guedes and Davide Rigon, Matt Griffin and Duncan Cameron not only took second in class, but also managed to wrap up the Pro-Am Cup drivers title of the 2015 Blancpain Endurance Series with one race to spare. After leading outright early on, third went to the best of the BMW cars, the #79 Ecurie Ecosse BMW driven by British quartet Modell, McCaig, Bryant and Sims.

It is a rare thing that a car leads its class from start to finish, but that is exactly what the #24 Team Parker Racing Audi (almost) did. Despite being hit a couple of times by other cars and a puncture in the latter stages, the Audi R8 LMS ultra of Ian Loggie, Jules Westwood, Callum McLeod and Benny Simonsen never looked like being headed in the Am Cup, beating the #56 Attempto Racing Porsche by two laps and finishing 14th outright. Ferrari honour was upheld by the #111 Kessel Racing Ferrari, which took third place in the final hour of the race.

That Am Cup win of the Team Parker Racing R8 helped Audi in claiming a second consecutive win of the Coupe du Roi, rewarding the brand that set the best performances in the three classes of the Total 24 Hours of Spa combined. Audi beat Ferrari by just four points.

Markus Palttala (#46 BMW Sports Trophy Team Marc VDS): "This win means everything to the Marc VDS Team. This is what we've been working for all this time. This is the sixth time I started for Marc VDS here, and we've come really close before. Although this is a win for BMW, I am a Marc VDS driver. And we've won this one for Marc van der Straten.'

Frank Stippler (#2 Audi Sport Team WRT): "It was kind of planned to have a cautious start, but we had some unlucky moments with the safety cars. After two or three hours we were already a lap down. But thanks to some good strategic decisions by Team WRT we came back strong. It's a big honour to drive for this team."

Christopher Mies (#5 Audi Sport Team Phoenix): "I was not concerned about the car, because we knew it would be reliable. The weather was a bit different this time, though. We started P11 and I could not see anything due to the spray. You do not want to do any mistakes in those conditions. We made some strategic mistakes in the beginning, but we still managed to be on the podium."

Stéphane Lémeret (#47 AF Corse Ferrari, 1st Pro Cup): "This must have been my best 24 hours ever. It was really incredible to drive for AF Corse, my favourite international racing team. I am really proud of this. I have to think my team-mates, especially Pasin. He did not know me beforehand, but he was confident enough to give me the opportunity to live this wonderful experience with him. It's really great."

Duncan Cameron (#51 AF Corse Ferrari, 2015 Pro-Am Cup champion): "This title is unbelievable. When we came here, we did not think we could win the championship, we only thought we could do ourselves some good, because there was little in it when we came here. Our engineers did a really good job with the strategy and by leading after six hours and being in second after twelve, there was even more to play for."

Julian Westwood (#24 Team Parker Racing Audi, 1st Am Cup): "This is the biggest result on the international stage for Team Parker Racing. Stuart Parker was the most emotional I've ever seen, to be fair. We finished second last year, we won this year, we're over the moon. And the team is absolutely ecstatic."