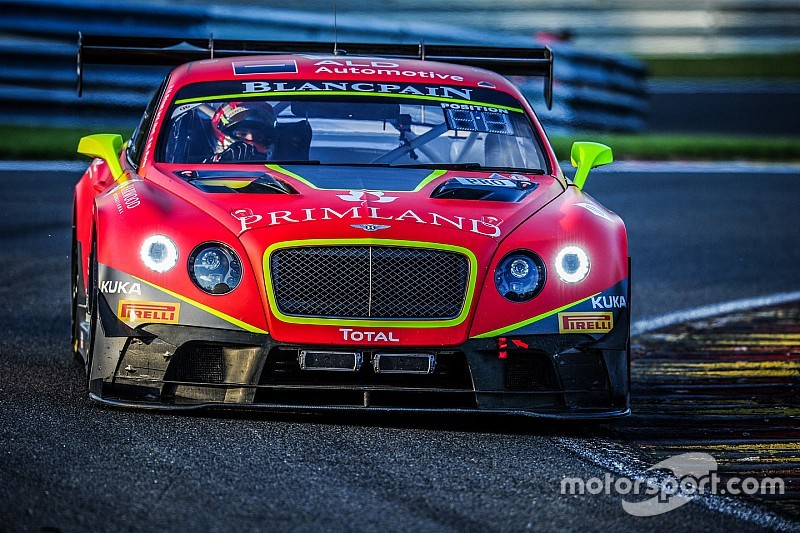 Spa-Francorchamps, Belgium - Bentley Team HTP scored another strong result in its second 24-hour race with the Bentley Continental GT3. At the 24 hours of Spa in Belgium, the premier endurance race for GT cars, the Bentley Team HTP-Bentley Continental GT3 of Harold Primat (CH), Vincent Abril (MC) and Mike Parisy (F) finished fifth in the Pro Class. As at the 24 hours Nürburgring in May, the HTP-Bentley was the best placed Bentley in the race. In the 67th running of the 24 hours of Spa, Primat/Abril/Parisy claimed the best result of a Bentley in the history of the race, which dates back to 1924. The second HTP-Bentley Continental GT3, entered in the Pro Am class and raced by Louis Machiels (B), Fabian Hamprecht (D), Clemens Schmid (A) and Max van Splunteren (NL), retired after a technical issue after eight hours.

My main goal was to finish the race, as this was my first 24-hour race.

The 24 hours of Spa were marked by difficult conditions. Heavy rain and many safety car periods in the opening stages, followed by low temperatures and fog at night made the demanding race an even greater challenge for the team and drivers. During the early safety car periods, Primat/Abril/Parisy lost two laps and also had to serve a penalty, but had a clean race after that and even scored the fastest race lap of a Bentley. Eventually they finished fifth in the Pro Class behind factory entries from BMW and Audi.

Also the second HTP-Bentley Continental GT3 had a good start. Machiels/Hamprecht/Schmid/Van Splunteren drove a flawless race in difficult conditions. They moved up to seventh in class in the opening hours in a heavy contested class with 22 competitors. The Bentley quartet then fought for a top ten position, before a technical issue after of 150 laps brought a premature end to their race.

"Fifth place in the Pro Class behind four works cars is a great result. For the second time in a 24-hour race we had the highest placed Bentley, this makes us really proud“, Bentley Team HTP team principal Norbert Brückner said. "The team did an excellent job and the drivers didn’t made any mistakes. I’m sorry for our Pro Am team. Louis Machiels with his great amount of experience in Spa was a great addition for our young drivers. Without the technical issue, I’m sure that we certainly had chances for a Pro Am podium at the end.“

Vincent Abril: "My main goal was to finish the race, as this was my first 24-hour race. I thought, if we had a clean race, we would finish in the top-ten and this is exactly what happened. It was great to team up in this race with Mike and Harold, I learned a lot from them. Mike drove a fantastic race. I know that he is a good driver, but his drive today was pretty amazing. In the race it was not important for us to be the quickest, it was important not to make mistakes. I think we drove a very intelligent race. I also scored big points here for the Blancpain GT Series, which is a nice bonus.”

Harold Primat: "The result is especially good for us as we were competitive in the previous rounds, but failed to finish and had bad luck all the time. This result now is a nice reward. It was hard work, we had to go through the rain and all that. We are the best Bentley out of four that started, and that is a great result for us. We now have two strong 24-hour results with Bentley. This shows how good this team is at the big races and this makes me happy to be part of it.”

Mike Parisy: "I drove for more then ten hours and really can feel now what I have done. Our pace was quite good at the beginning. I got a penalty, but later it turned out that this was obviously a mistake by a Marshall. Anyway, the team did a good job and we set the fastest Bentley lap time in the race. Everybody did a good job, the car was perfect and we didn’t have any issue. We showed that we are a strong team and have big potential for the next race.“

Clemens Schmid: "At the start it was not very easy with all the rain. It was just about surviving the conditions. The Bentley was very quick, especially in the night the car was very fast. We were on the way to a great result, but then I lost the drive and had to retire, we don’t know yet what exactly happened.”

Fabian Hamprecht: "It’s a pity that we retired, as our car was quick. I drove a triple stint in the rain and the car was good in those conditions. My lap times were good and we had a great tire management. I’m satisfied with my performance, it’s too bad that our race ended early.“