Oman Racing Team on its debut in the Blancpain Endurance Series at Monza ended in disappointment.

A fine performance from the Oman Racing Team on its debut in the Blancpain Endurance Series at Monza (April 13) ended in disappointment when the team’s Aston Martin was forced to retire due to an electrical problem with just under an hour of the race left to run.

The three-hour race at the famous venue for the Italian Grand Prix marked the debut at this level for the Motorbase Performance-run squad and the team’s Aston Martin V12 Vantage GT3 ran very strongly in a huge field packed with quality.

After qualifying mid-grid, the driver line up of Ahmad Al Harthy, Stephen Jelley and Michael Caine was looking good for a top 10 overall finish in the opening event of the high-profile five-round European series.

Running in the Pro Cup category, Jelley took the first hour-long stint and pushed the car firmly into contention in 12th place before handing over to Al Harthy. The Omani racer built on Jelley’s fine start to work the Aston Martin into 11th place overall and 9th in the Pro Cup. 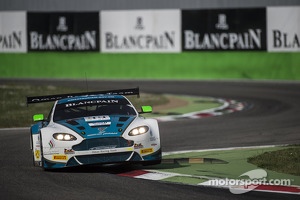 As the race entered the final third, another slick pit-stop by the Motorbase crew sent Caine into the race with his sights set moving well up into the top 10. However, within a lap Caine knew he had a problem as an electrical fault developed. Caine was forced to return to the pits where the team worked ceaselessly to fix the problem. However, the fault could not be found quickly and the team was forced to retire the car.

Despite the disappointment of retiring from the race, there was much to be positive about as the Motorbase squad competed at this level for the first time. The drivers and team did excellent jobs and a very strong result was only lost to circumstances outside the team’s control.

The Motorbase squad will now travel back to the UK to prepare for the first round of the Avon Tyres British GT Championship at Oulton Park (20/21 April). The Blancpain Endurance Series continues at Silverstone (23-25th May.)

Oman Racing Team Principal David Bartrum: “At the last stop when Ahmad handed over to Michael the car developed an electrical issue. After sterling drives by Stephen in first stint then Ahmad in the second, it was all set for a good top ten finish when Michael joined the race P11 and ready to push his way further up the order.

“But after only one lap things started to play up: firstly the wipers, then the pit-lane speed limiter. So Michael pitted and that was the end of the race. The team worked to fix the problem but to no avail.

“It was a real shame as the drivers and the team had done a great job and we were on for a P6 or P7 overall, unfortunately Michael did not get the chance to finish the job started by his team mates.”

Oman Racing Team driver Ahmad Al Harthy: “As soon as Michael took over the car started behaving strangely, shutting itself down and just not running properly at all. So, he pitted and the guys in the team did absolutely everything they could to try and fix the problem, they changed everything possible but still couldn’t get to the bottom of it.

“Until then everything was going very well, really strong, and I was happy with my stint. My pace and consistency were good and I did everything asked of me by the team, we all did our absolute best but it just wasn’t to be unfortunately. That’s the nature of endurance racing and we all know that.”