Insight Racing all set for 2014

Danish racing team Insight Racing with Flex-Box is all set for the Blancpain Endurance Series 2014 with a strengthened team and a new driver.

Insight Racing with Flex-Box, based in Hedehusene near Roskilde in Denmark, has an even stronger racing team for the five race endurance championship featuring a strong field of GT3 race cars. The season highlight will no doubt be the 24 hour race at iconic Spa-Francorchamps in July. 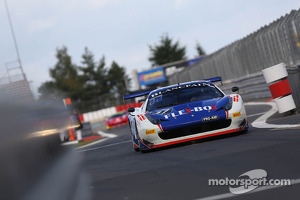 For that race in particular, Insight Racing with Flex-Box has taken on a new third driver for the twice around the clock race. Joining the Danish Ferrari 358 GT3 is Jason Yeomans, 41 years old. The London-based Scottish CEO and former professional race driver went up the ladder in formula racing and saloon cars in the 1990s before turning to a business career in technology companies. Last year, Yeomans returned to racing in Lamborghini Super Trofeo Series with good results.

The team is getting ready for the pre-season test on the HTTT Paul Ricard circuit in France on Monday and Tuesday. The track is open for visitors on both days.

First race of the Blancpain Endurance Series season is on Italy’s Monza track on April 12th and 13th.

"We can’t wait to get going again at the test to get some laps under the belt and to get everyone in the team dialed in. We have made some changes in the team for this season and have a few more guys on board and at the same time we’re happy to continue with Flex-Box as a partner.

We’re happy to announce that Jason Yeomans will be joining as a driver for the 24 hour race, and we will make sure that he and Dennis get some laps in the car to get everything to gel together.

It’s been a long and exciting winter – it will be great to get back in the car again."

These are exciting times – we have some changes in the crew, but luckily they are all experienced guys that know each other well from Martin’s time in Danish Touring Car Championship.

It’s also a positive that Jason, our new driver, has chosen to join us for the tests to be better integrated into the team – and to get comfortable with the car.

Martin and the rest of the guys haven’t been wasting their time during the winter, so we have a few things to test regarding the car and setups. I feel pretty optimistic for this season!

I am really excited to have agreed to drive with Insight Racing at the Spa 24 hours. I raced professionally up until 1999 when I quit to focus on business and making money rather than spending it!

My dream had always been to return at some point (to racing) to compete in the Le Mans 24 Hours and I made the first step towards that in 2013 when I returned to racing, driving for Lamborghini Racing UK in the Super Trofeo Series. A late deal agreed only two weeks before the first race meant no testing before the first official test at Monza – a baptism of fire upon my return with a number of firsts – first race car driven since 1999, first drive in a Lamborghini Super Trofeo, first time at Monza – and unfortunately first time I had two blowouts at over 150mph as well!

I began looking at a ‘step-up’ in 2014. In my mind the Blancpain Endurance Series is the best in Europe, so that was a given, next was to find a leading team who I could work with. I was introduced to Martin Jensen of Insight Racing through my old Manager – Andy Woolgar. Martin and I talked, he created a plan that included the Spa 24 and a testing programme that suited my diary.

Having met the team at Insight Racing I am really happy about our plans for 2014. The team is great, they have some really amazing technical expertise and some really great drivers in Martin and Dennis. I can’t wait to get out in the Flex-Box Insight Racing 458 Ferrari at Paul Ricard.

The Belgian WRT team has confirmed the switch to BMW for its 2023 GT3 programmes as it began testing with a roster of drivers including MotoGP legend Valentino Rossi.