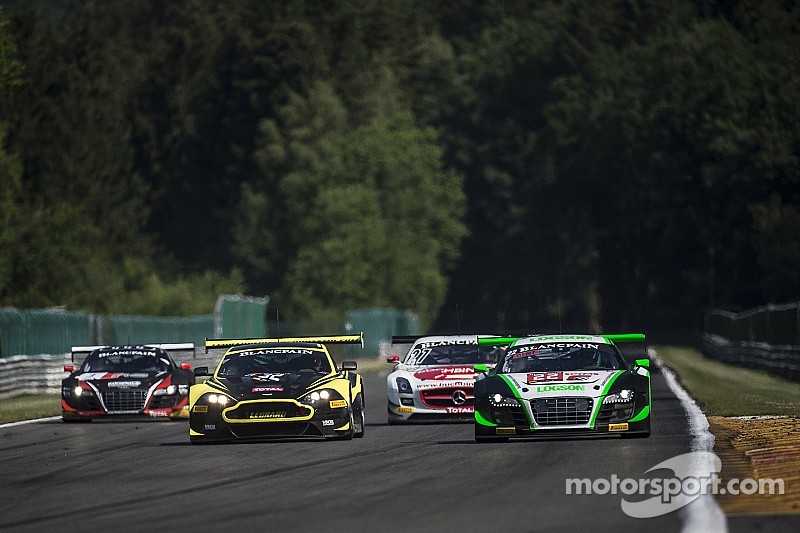 The Belgian classic will see former F1 drivers, endurance aces and promising young talents at the start of what promises to be a unforgettable edition of the Total 24 Hours of Spa.

The 66th edition of the Total 24 Hours of Spa – celebrating the 90th anniversary of the endurance classic – will see 61 cars on the entry list. With only a couple of days left before the first on-track action for the highlight of the Blancpain Endurance Series almost all the teams have completed their driver line-ups. The Belgian classic will see former F1 drivers, endurance aces and promising young talents at the start of what promises to be a unforgettable edition of the Total 24 Hours of Spa. A round up of the latest additions to the entry list.

Even though most of the Pro Cup teams had determined their line-up at the official test day for the Total 24 Hours of Spa, the last couple of weeks have seen some high level names added to the entry list.

Maassen and Dusseldorp will welcome their Dutch countryman Yelmer Buurman to the Pro Cup. Buurman shares the Black Falcon Mercedes with Briton Adam Christodoulou and Frenchman Mike Parisy. The latter took the Black Falcon machine to a second place finish in the 2012 Nürburgring round of the Blancpain Endurance Series.

There will be a premiere at Spa for the Audi R8 LMS ultra of Czech squad ISR Racing. The car will be raced for the first time, in the experienced hands of Germans Marc Basseng and Fabian Hamprecht, together with Czech ace Filip Salaquarda.

McLaren can count on an extra car in the Pro Cup as well, with Von Ryan Racing entering a MP4-12C for Britons Tim Mullen and Rob Bell, who will be joined by Kiwi Shane Van Gisbergen. The V8 Supercars-star made his endurance debut earlier this season, but this will be the first time he will tackle the legendary Spa-Francorchamps track.

Van Gisbergen will meet his V8 Supercars-rival Craig Lowndes in the Belgian Ardennes, but the 40-year-old Australian has some experience on the Francorchamps circuit, having raced a F3000 around the 7 km track, back in 1997. Lowndes is one of thirteen Platinum drivers participating in the Pro-Am Cup, all of them trying to boost the chances of their respective teams for a class victory and – who knows – an excellent performance overall. Among the thirteen Platinum drivers there are two of five former F1 drivers present in Spa (Giorgio Pantano and Pedro Lamy), a double Total 24 Hours of Spa winner (Andrea Bertolini), an Indy Lights champion (Tristan Vautier), endurance and GT stalwarts (Darren Turner, Marco Bonanomi, Olivier Pla and Alessandro Pier Guidi), former F3 aces (Marko Asmer,

Alexander Sims and Daniel Zampieri) and last year’s Total 24 Hours of Spa’s pole sitter (Stefan Mücke) as well. Add to that a multiple Super GT-champion (Masataka Yanagida) and several Nissan Playstation GT Academy winners (Wolfgang Reip, Mark Shulzhitskiy, Miguel Faisca, Nick McMillen and Florian Strauss) and you should not be surprised if you see a car of the Pro-Am Cup challenging the Pro Cup machines.

This year, all three Blancpain Endurance Series races saw the same car winning the Gentlemen Trophy: the #458 GT Corse by Rinaldi Ferrari. Alexander Mattschull is the only driver on the car who can make it four in a row, sharing the bright green 458 Italia with Pierre Ehret, Tim Müller and Roger Grouwels. Other notable and recent additions are a second Ferrari for Duqueine Racing and the Porsche of Belgian Delahaye Racing, with the experienced Stéphane Lemeret on board. Lemeret was three times runner-up in the Total 24 Hours of Spa, the last time in 2009, when one of his team-mates on his Maserati MC12 was Carl Rosenblad. The Swedish driver is now one of Lemeret’s rivals in the Gentlemen Trophy, being one of the recent entries on the Team Parker Racing Audi, sharing the car with former British GT-champion Leo Machitski.

Norbert Bruckner (HTP Motorsport team manager): “Jazeman Jaafar convinced our engineers immediately by his enormous base speed and we agreed that he was a good choice for our team."

Filip Salaquarda, (#75 ISR Racing Audi): “This is a huge challenge for us because we’re fielding this car with our own team for the first time in a 24-hour race.”

Shane Van Gisbergen (#101 Von Ryan Racing McLaren): “I’ve done a few laps on the simulator to learn Spa, but you never get the elevation changes and obviously Eau Rouge and other places are quite steep, so you never know until you do it in person.”

Giorgio Pantano (#15 Boutsen Ginion McLaren): “With my experience of the McLaren GT3 car and the well established organisation of Boutsen Ginion Racing and my team-mates, I am confident we can collectively get the car to where it belongs…..at the front of the grid.”

Craig Lowndes (#52 AF Corse Ferrari): “The combination of a Ferrari and the Spa circuit really is a dream come true.”

Wolfgang Reip (#80 Nissan GT Academy Team RJN Nissan): “We should aim for at least a podium finish in the Pro-Am Cup.”