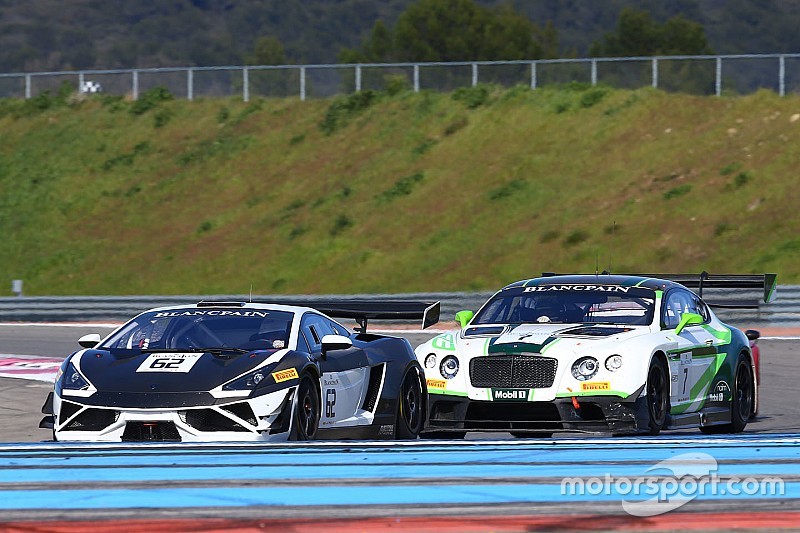 The historic circuit just north of Milan plays host to a three-hour race, during which almost 60 cars - representing 11 manufacturers - will deliver some of the best GT racing in the world.

On Sunday 24 April no fewer than 57 impressive GT3 cars will line-up for round two of the 2016 Blancpain GT Series, the first of this season’s Endurance Cup rounds. And with almost half the field competing in the Pro category, the three-hour race at Monza promises to be an exhilarating one.

Two weeks after the first race of the Sprint Cup in Misano the drivers and teams competing in the full Blancpain GT Series head for the Autodromo di Monza, setting for the first of 2016’s five Endurance events. The historic circuit just north of Milan plays host to a three-hour race, during which almost 60 cars - representing 11 manufacturers - will deliver some of the best GT racing in the world.

Italian marques, much to the joy of local fans, boast the largest contingent of entries with 15 Ferraris and 10 Lamborghinis making the trip. The Prancing Horse armada is neatly divided between eight 458 Italia and seven brand-new 488 GT3. The Maranello machine has traditionally been the weapon of choice in both the Pro-Am and Am cups, with reigning Pro-Am champions Matt Griffin and Duncan Cameron defending their title with the new 488 GT3. This year some teams have also opted to field a Ferrari in the overall category, such as Rinaldi Racing and AF Corse. One of the latter’s crews comprises last season’s Total 24 Hours of Spa Pro-Am Cup winners, Pasin Lathouras and Alessandro Pier Guidi, who are joined by Michele Rugolo.

The Lamborghini camp also has fond memories of Monza, which provided the setting for its then-new Huracan GT3’s maiden victory exactly one year ago. Three teams bring two Huracans each to Monza: British squad Barwell Motorsport enters a pair in the Pro-Am Cup while full-season entrants Attempto Racing field one in the same class and another in the overall category (with last year’s winner Fabio Babini joining Daniel Zampieri and Patric Niederhauser). Meanwhile, Austrian squad Grasser Racing Team will be eager to repeat their 2015 win.

Countering this impressive amount of Italian horsepower will be three Audi teams entering a total of nine R8 LMS : five for Belgian Audi Club Team WRT, and two each for ISR and Saintéloc Racing. The Belgian squad, which leads both the Blancpain GT Series Drivers’ and Teams’ standings after the opening round at Misano, will be aiming for two in a row on Italian soil. Misano winners Laurens Vanthoor and Fred Vervisch are accompanied by Laurens’ younger brother Dries, while his Sprint Cup co-driver Robin Frijns joins Stuart Leonard and Michael Meadows. The team can also count on the vast experience of drivers like Sergio Jimenez, Peter Kox, Pierre Kaffer and triple Le Mans class winner Antonio Garcia. Both ISR (Frank Stippler) and Saintéloc (Marco Bonanomi) have talented and quick Audi factory drivers in their ranks, too.

But Audi is not the only German manufacturer to have several teams present. Four squads have chosen the brand-new Mercedes-AMG GT3 to compete with in the 2016 Blancpain GT Series. AKKA-ASP, which only just missed out on a podium finish in Misano, brings two cars: one for the Pro-Am Cup and another for the Am Cup, the category in which they are defending Teams’ champions. Team Black Falcon has one factory-backed car in the overall category and one in the Pro-Am Cup, while the legendary Team Zakspeed makes an appearance with Canadian drivers Tagliani, O’Young and Laberge. But the Mercedes-AMG on most teams’ watch-lists is likely to be HTP Motorsport’s. Misano runners-up Maxi Buhk and Dominik Baumann are joined aboard the #84 machine by Malaysian driver Jazeman Jaafar.

With cars from the four previously mentioned manufacturers making up two-thirds of the entry list, one might think that the remaining teams could be somewhat intimidated by being out-numbered. But even with ‘just’ four cars each at their disposal, the BMW and Bentley squads are also likely to be among the frontrunners. Bentley has two representatives: Team Parker Racing, entering one car in both the Am and Pro-Am Cups, and Bentley Team M-Sport, which took the first win of the 2016 season in Misano’s Qualifying Race. The latter has two of 2015’s Drivers’ champions in its line-up this year, with Frenchman Vincent Abril (Sprint champion) and Wolfgang Reip (Endurance champion) joining the Bentley Boys’ ranks.

BMW has two cars in the overall category as well - entered by Rowe Racing - while both Boutsen Ginion Racing and BMW Team Italia each enter a single new BMW M6 GT3 in the Pro-Am Cup. Judging by how competitive the car looked in Misano - two podium finishes for Rowe pairing Sims and Eng - the new M6 is certainly among the outsiders for a good result.

‘Outsider’ might be an inadequate label for the two teams representing Nissan and McLaren in this year’s Blancpain GT Series. Nissan GT Academy Team RJN drivers took last year’s Endurance Drivers’ title and are aiming to successfully defend their crown, while McLaren won two of last year’s five Endurance races. With Shane Van Gisbergen among those joining Garage 59’s driver line-up for the long-haul races, keep an eye out for the orange-and-white 650Ss.

The Pro-Am Cup not only sees 23 cars fighting for the podium positions but also has the honour of welcoming two of Porsche’s new 911 GT3s. Attempto Racing has one sitting in its garage next to their two Huracans while French Porsche specialist IMSA Performance enters the latest GT3 machine from Stuttgart as well. Up against them is the championship’s lone Aston Martin, although Oman Racing Team has proven in the past that it does not require strength in numbers to shine.

The same goes for an all-time fan favourite: the Emil Frey Jaguar. After winning the Pro-Am category in the last Endurance round of 2015, the Swiss squad decided to take on the challenge of the overall category. The driver line-up reflects the team’s ambitions, for Lorenz Frey will be joined by former European Formula Renault 2.0 champion Albert Costa from Spain and possibly the most successful driver in the history of SRO organised series, Stéphane Ortelli. The Monegasque driver - 1998 Le Mans 24 Hours winner, double FIA GT N-GT champion, winner of the 2003 Total 24 Hours of Spa, 2012 Blancpain Endurance Series champion and 2013 FIA GT Series champion - is determined to use his vast experience to push the Swiss team to new heights.

As always, the Monza meeting is a true motorsports fest, spectacular from start to finish, with plenty of support races as well. The Lamborghini Blancpain Super Trofeo brings no fewer than 47 cars to the grid this year, and the 26 young wolves of the Formula Renault 2.0 Northern European Cup are happy to race at Monza again too. The Italian track is also the opener of the 2016 Competition 102 GT4 European Series, another SRO Motorsports Group organisation. Some 30 cars will be at the start there, with among others a strong representation of yet another prestigious Italian manufacturer, Maserati.

Blancpain GT Series action at the Autodromo di Monza starts on Saturday 23 April at 9am, with the Bronze test, Free Practice and Pre-Qualifying Sessions scheduled for later that day. Qualifying starts at 9am on Sunday morning before the three-hour race gets underway at 3pm.

Mirko Bortolotti (#16 Grasser Racing Team Lamborghini): "Racing at Monza is always a special thing. There's lots of history and tradition on this race track and personally I have great memories there as well. I'm also really looking forward to get the Endurance Cup underway! I think we have a solid line up and the atmosphere within the Grasser Racing Team is great. I get on very well with Jeroen, and Rolf is a great addition to the team. We all have the same goal: we want to win! Unfortunately Misano was a difficult weekend for all Lamborghinis. But we keep working hard to bounce back where we belong. The level of competition in the Blancpain GT Series is extremely high, as it was last year. Anyone is a potential contender, but Audi and Mercedes are especially strong at the moment."

Sergio Jimenez (#3 Belgian Audi Club Team WRT R8): “I am very much looking forward to my first race with WRT after a clashing Stock Car commitment in Brazil ruled me out of the Misano round. I have driven the new car during testing and like it a lot. Every time the team went to the track the car kept on improving, so I hope it is even better now. Our fiercest competition? I expect that to come from the team’s other cars. We have a lot of fast guys, but that is a good thing, because it pushes everybody to improve all the time.”

Shane Van Gisbergen (#58 Garage 59 McLaren): “I really enjoyed my first season of racing in Europe last year, so I am looking forward to getting back there now that I know the tracks and the car really well. The beauty of the Blancpain GT Series at the moment is that you are not sure who is going to be competitive on any given weekend. It makes it exciting not knowing who is going to be fast. There are a couple of new model cars this year so it will be interesting to see how they go.”

Matt Griffin (#52 AF Corse Ferrari): “The Blancpain GT Series Endurance Cup is a fantastic championship with great competition. What I am looking forward to the most is a 60-car grid fighting like hell. It is impossible to pick any one favourite given how competitive this series is. I have been involved in the development of the new Ferrari 488, so know the car very well. Overall it is a step forward from the 458 but I think the other manufacturers have made similar progress, too.”