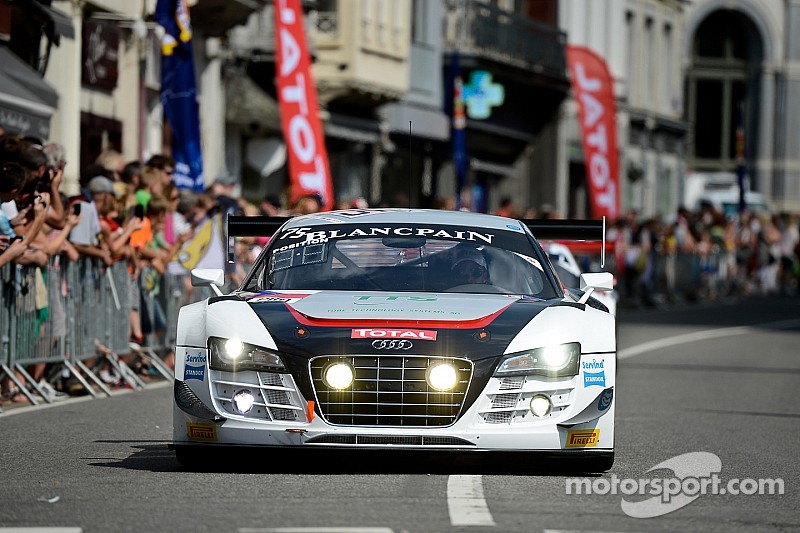 Rosenbach/Spa-Francorchamps (rol/ot) The race driver Marc Basseng from Rosenbach (Saxony) returns from the Total 24 hour race with about 60 drivers at start on Sunday (27th of July) in Spa-Francorchamps (Belgium) with a good 14 th overall position. He shared the cockpit of the Audi R8 LMS Ultra of the Czech Team ISR with the German Fabian Hamprecht and the Czech Filip Salaquarda.

“We crossed the finish line and we scored a good position with our GT3 race car, which is a nice success”, the 35 year old explained, who is on overall position ten at the Pro Cup drivers ranking after the fourth season event of the Blancpain Endurance Series. Winners in Belgium have been his brand colleagues Laurens Vanthoor (Belgium), Markus Winkelhock and Rene Rast (both Germany) of the Belgian Audi Club Team WRT, which for Basseng drives this year as well.

“The team ISR had its 24 hour race premiere and its premiere with an Audi, so our result is even better. Of course there is not that much experience yet, which means a loss of time at the pit stops for example. But we made it until the finish line”, Marc Basseng explained, who has been FIA GT1 world champion in 2012. “Of course we had a few highlight in Spa, the car in the gravel as well as a fire accident in the pit, when fuel ignited and the Audi has been on fire. Nobody got hurt and after the flames were extinguished we were able to get back on track.”

The race must have been very exhausting due to the heat, the furious driving of other combatants, a lot of crashes and safety car phases. “But it has been great fun anyway”, the driver from Rosenbach said, who has been behind the wheel for about eight hours. The next race at the VLN long track championship for Marc Basseng is already scheduled for next Saturday (2nd of August). He will share the cockpit of the Audi R8 LMS Ultra of Team Phoenix Racing with Frank Stippler (Bad Münstereifel) at the four hour long 37th RCM DMV Grenzland race.

Dramatic conclusion to 24 hour adventure for Al Harthy at Spa