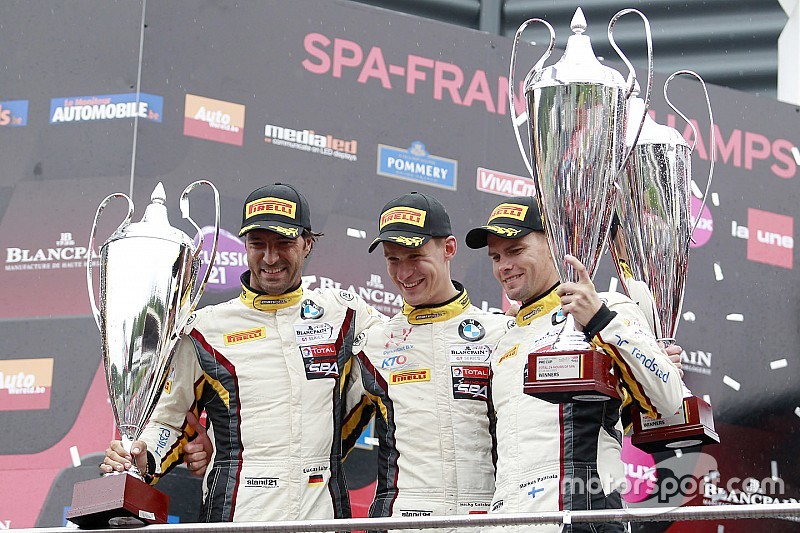 Spa Francorchamps, Belgium –  Nick Catsburg, Lucas Luhr and Markus Palttala drove the #46 BMW Z4 GT3 to score the win for the Belgian outfit. However, the sister #45 car of Maxime Martin, Dirk Werner and Augusto Farfus did not make the finish, retiring with a technical issue whilst leading the race.

Beginning in torrential rain, the race looked to be slipping away from the #46 crew. Luhr struggled with tyre pressure issues, and found himself slipping down towards the bottom of the top 20 – having started seventh. Then, when it looked as if the track would dry, the team split the strategies of the two cars. It meant Palttala had the difficult task of handling slick tyres in wet conditions, which didn’t dry anywhere near as fast as the team hoped. The car dropped outside the top 30.

I didn’t believe we could win it, to be honest.

The fightback began before nightfall, on the dry track, and overnight Catsburg starred, regularly the quickest man on the track. His fastest race lap was nearly half a second better than any other driver’s. As the car moved up the order, it soon began to be in contention for the podium, and, with the unfortunate demise of the #45, was handed an opportunity. Catsburg took it, moving the car into the lead and extending the advantage by more than 30 seconds in short order.

Palttala – fighting a back injury with aplomb – and Luhr both showed pace aplenty, and the car was soon nearly a lap ahead. In the end, the car crossed the line one lap ahead of the competition.

For Martin, Farfus and Werner, it was a tale of heartbreak. Having led for much of the morning, the car suffered a technical issue that seized the motor just before 11am. Werner was forced into a spin at Bruxelles, while leading the race comfortably, and was unable to rejoin.

Nick Catsburg, BMW Z4 GT3 #46: “I didn’t actually know I was challenging for the lead at first. I thought we were out of sync on pitstops. Then they said ‘the car in front is the leader’ and I knew then it was time to push. I think we just had some more pace in the end. You’re only as good as the car you’re given, and this one was fantastic. I’m really pleased for the team. I’ve worked so long with them, and they work so much harder than us drivers… It’s just a sensational feeling. This is what you dream of.”

Lucas Luhr, BMW Z4 GT3 #46: “It’s still unreal, especially after coming so close last year. I’m super, mega happy. It’s great for the team, and it’s great for BMW. To do it in the last year of the Z4 is phenomenal. I’m just so happy, super proud. I wasn’t sure if we could come back after having such a difficult first stint. It was very tricky to drive, but we never gave up. You have a feeling that you always have a chance. We made it hard for ourselves at times, but in the end we came out on top. I’m disappointed for the other car – it was an unfair end for them. I’ve been in that position plenty of times too, and I really feel for them.”

Markus Palttala, BMW Z4 GT3 #46: “There are so many things to mention. I did this race for the first time in 2000, and in the last three years we’ve led the race. I’ve come so close, we’ve come so close, that to finally do it feels so, so good. It’s something that’s been building up. We all wanted this so badly. It’s a home race for the team, it’s a home race for me because I live in Belgium. I didn’t believe we could win it, to be honest. After the start, I just thought ‘this is not my weekend’, but it turns out that it was. There wasn’t any contact, a single mechanical issue… I’m so proud of the team for doing such a perfect job. Lucas is the most professional guy out there, and Nicky… Well, I’m pretty sure he found a shortcut somewhere. He was unbelievable. This whole situation is pretty unbelievable!”

Marc van der Straten, Team Owner: “What a feeling. This race means so much to me, I have such a lot of history here, and to win with this team feels amazing. I’m so proud of the hard work done by every member of the Marc VDS Racing Team family this weekend, because it was a perfect job. Sometimes you begin to wonder if the win will ever come, when you find yourself being thwarted – but today it came. Thank you to the team, to Nick, Lucas and Markus, and thank you to all the fans who make such a huge effort in supporting us.”