International Porsche customer teams have clinched good starting positions in Belgium for the 24-hour race on the Spa circuit.

Stuttgart. The international Porsche customer teams have clinched good starting positions in the decisive qualifying for the 24 Hours of Spa-Francorchamps. The best pilot in a Porsche 911 GT3 R at the “Super Pole” was works driver Nick Tandy (Great Britain), who captured the fifth grid spot for the Belgian team ProSpeed Competition at their home race. Porsche factory pilot Marc Lieb (Germany) takes off into the endurance classic tomorrow at 16.30 hours from position nine in the 911 fielded by Manthey-Racing. Driving for Pro GT by Almeras, Franck Perera (France) secured nineteenth on the Ardennes roller-coaster as the third best driver of a 911 GT3 R. 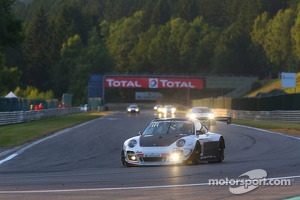 “I’m happy with my lap time and my grid position,” said Nick Tandy who competes in Spa with Porsche works driver Marco Holzer (Germany) and the Italian Marco Mapelli. “It actually turned out to be my first really problem-free lap of the entire qualifying sessions. It’s a shame that we were handed a time penalty for the start of the race because of an engine change. The minute in the pits will throw us back, but we’ll do everything to bring home a good result on ProSpeed’s home turf.”

After the Super Pole, in which the fastest 20 from yesterday’s qualifying sessions were sent out on the track at 20-second intervals to complete only two timed laps, Marc Lieb was not satisfied with his ninth place – particularly after having posted the third fastest time yesterday. “Unfortunately I made a small mistake today. Because our times are all so close together it has put me back somewhat. The mistake is annoying, but the grid position isn’t that disappointing because our car is set-up well for the race.” Lieb shares driving duties in the 911 GT3 R run by the German Manthey-Racing squad with his works driver colleagues Richard Lietz (Austria) and Patrick Pilet (France).

The Porsche team Pro GT by Almeras on position 19 is firmly in French hands: Franck Perera tackles the race with his compatriots Eric Dermont, Philippe Giauque and Morgan Moulin Traffort. The second 911 fielded by ProSpeed Competition helmed by the driver trio Marc Hennerici (Germany), Xavier Maassen (Netherlands) and Maxime Soulet (Belgium) takes off into the race from position 23.

Heading into the 65th running of the long distance classic from 26th on the grid are Porsche works drivers Timo Bernhard and Joerg Bergmeister (both Germany) with Nicolas Lapierre (France). “My fastest lap in yesterday’s qualifying was pretty good until the last chicane and would probably have put us in the top 20 for the Super Pole,” said Timo Bernhard. “But then another driver got in my way and I lost three-tenths. Afterwards a red-flag hampered another attempt. We struggled a little with the set-up but now we’re on the right track and feeling good for the race.”