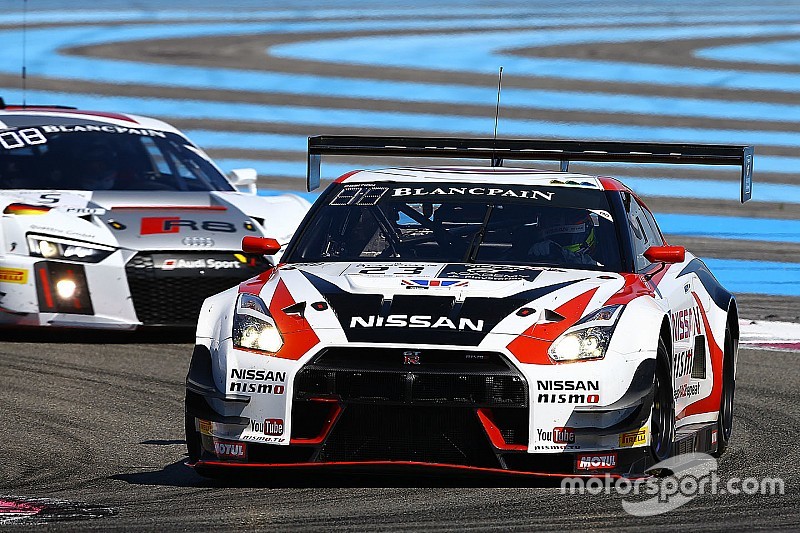 London, UK – The longest and toughest race on the Blancpain Endurance Series schedule takes place at Spa-Francorchamps on 25-26 July and Nissan has entered a global cast of drivers from six different countries, including four winners of GT Academy. One of the best racing circuits in the world plays host to the best GT3 cars and drivers in the world for a 24-hour rollercoaster ride through the Ardennes forest in Belgium.

Last year’s Spa 24 Hours was marred by accidents occurring throughout the early stages and it wasn’t until darkness fell that the race finally settled down. All of the Blancpain competitors will be hoping for a smoother start this year, not least Alex Buncombe who had to take evasive action through Eau Rouge to avoid being wiped out!

This is one of the most important races in the world and every driver would love to win it,

Nissan has entered a Nissan GT-R NISMO GT3 in the PRO class for the first time this year so current championship-leaders Alex Buncombe (GB), Katsumasa Chiyo (JAP) and local man and GT Academy winner Wolfgang Reip (BEL) will be battling hard for outright honours in the #23 Nissan.

“As always I will push hard to get the best possible result, remembering that anything can happen in 24 hours,” said Reip. “I love this track. I know it better than any other circuit and having the support of my friends and the Belgian people gives me great motivation. I had a practice run in the 25 hour Fun Cup race last weekend. Ok the car was nothing like the GT-R but I drove for almost 10 hours in a lot of traffic so it has really helped me to prepare for the Spa 24 Hours.”

Katsumasa Chiyo embarks on his second Spa 24 Hours and admits that last year’s race was an eye-opener: “Last year I was shocked and almost overwhelmed by the scale and toughness of this event,” he said. “The Spa 24 Hours is one of the most demanding endurance races in the Blancpain Endurance Series with over 60 GT3 cars, competitive manufacturers and teams, and top drivers competing fiercely. Last year we made it to the chequered flag but we were unable to reach the top 10. This year, I am determined to get a good result and win valuable points. I am fully aware it is not easy to win the race but I believe there are chances for us. I will fight with my team and teammates right through to the chequered flag.”

“This is a great challenge for me,” said Pla. “I am not a GT specialist but the principles are the same with all racing, you have to be smooth and maintain your focus. I have competed in the Spa 24 Hours four times now. It is a demanding race and you have to work hard to manage the traffic. I had a good run in the Nissan GT-R NISMO GT3 at the Spa Test recently and I found the car easy to drive, especially through the fast corners where it feels very stable. That’s exactly what you need at Spa so I think we will be strong in the 24 Hours.”

Ricardo Sanchez won GT Academy International last year and after a good performance in the 2015 Dubai 24 Hours, earned himself a place on the Blancpain Endurance Series squad. The Mexican racer is looking forward to whatever Spa throws at him.

“This is one of the most important races in the world and every driver would love to win it,” said Sanchez. “Blancpain has been challenging for me as the level of the drivers is amazing and every team is very competitive. What is important for me is that I improve with every stint that I do. We all had good pace at the Spa Test so I think we will have a strong race but we must always remember that ‘to finish first, first you have to finish!’”

The #23 will race at Spa in its regular red, white and black livery but the #22 Nissan, which has run in black since the start of the season, will look rather different at Spa.