Nothing decided with five hours to go 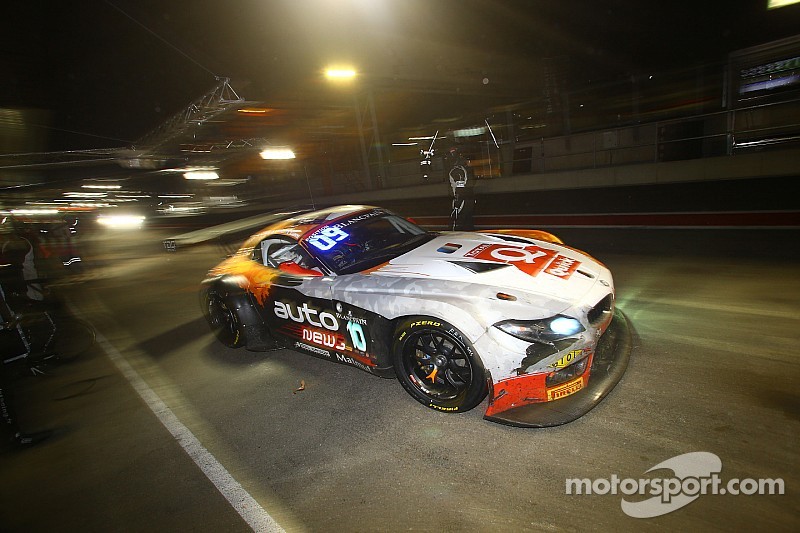 Five hours from the end of the 66th edition of the Total 24 Hours of Spa the fight for the lead is still as undecided as it has been since the start of the race.

The leading cars are still separated by less than a minute, with the #77 BMW Sports Trophy Team Marc VDS BMW and #1 Belgian Audi Club Team WRT Audi swapping places at the sharp end of the classification.

A short rain shower greeted the remaining competitors of the 2014 at 8pm, but the rain did not last long enough to cause the drivers to switch to rain tyres. That meant that the #1 Audi and the #77 BMW continued to lead the race in turns, depending on the pit stops. The BMW Sports Trophy Team Marc VDS had thought to take advantage of a safety car intervention (caused by a crash of the #25 Sainteloc Racing Audi) shortly before the 17-hour mark to change the brakes on the #77 BMW, but just when Markus Palttala made his way into the pitlane, the lights went to green again. That meant that the situation remained as it was, with strategic choices probably deciding the outcome of the endurance classic. In third is the #3 Belgian Audi Club Team WRT Audi, one lap down. The #2 sister car is not far behind.

In Pro-Am the trouble free run of the #90 Scuderia Villorba Corse Ferrari came to an end when the car had a lengthy pitstop to solve a gearbox problem. Seven laps were lost, which meant that the #79 Ecurie Ecosse BMW took the lead of the class. After a change of brakes with five hours to go, the BMW dropped to second, leaving the Pro-Am lead (and 8th overall) to the #53 AF Corse Ferrari. The #52 AF Corse is still in contention as well, on the same lap as the leaders.

The fight in the Gentlemen Trophy might have been decided just after 8am on Sunday morning when Lorenzo Bontempelli lost the front left wheel of the #42 Sport Garage Ferrari when leaving the pitlane. By the time the former leader of the category had made his way back to the pits four laps were lost and the #51 AF Corse Ferrari is now firmly in the lead of the category. The fight for second in class is still raging hard though, between the #22 Team Parker Racing Audi and the #228 Delahaye Racing Porsche.