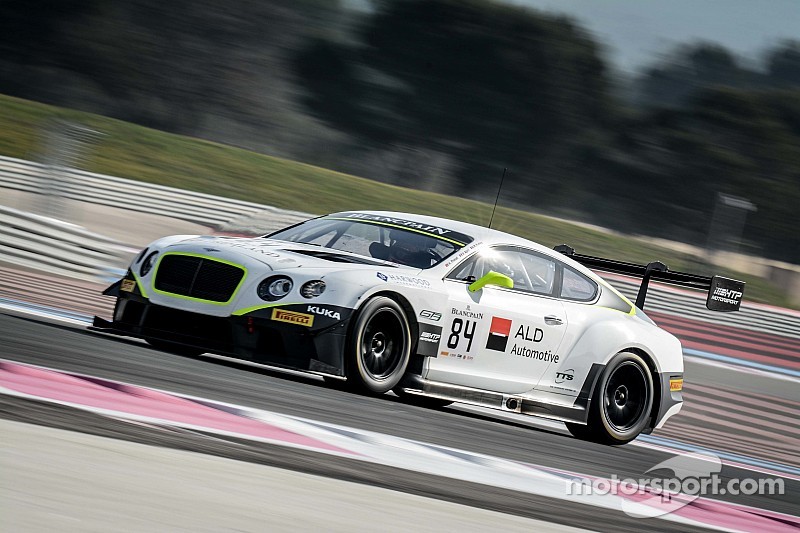 Although the event traditionally marks the start of the European GT season, Primat has already sampled the #84 Bentley Continental GT3 that HTP will enter in the PRO Cup category.

Indeed, Harold’s maiden test outing behind the wheel of the squad’s 2015 charger came at Portimao in late January, before the Swiss ace raced it at this year’s Bathurst 12 Hours a couple of weeks later. Since then, Primat has further trialled the Continental GT3 over several test sessions held at Silverstone, Monza, Paul Ricard and Misano.

I am delighted to have Mike and Vincent on board at HTP this year.

Final preparations for Primat and HTP took place at the opening VLN Endurance Championship round last weekend, which was tragically cut short when a car left the Nordschleife track and hit several spectators, one of whom succumbed to their injuries.

The 3 Hours of Monza sees Harold join his new HTP crewmates, GT race winner Mike Parisy and reigning Silver Cup champion Vincent Abril, in a line-up that Primat hopes will enjoy regular top-five finishes over the course of the year.

After securing a solid fifth at last year’s event, Harold knows that a strong start at the Italian track is key in order to bank early championship points for the team. As the only returning driver for HTP in the new line-up, he is prepared to take on more responsibility within the team to ensure its on-going success.

Despite finishing an impressive sixth in last year’s Drivers’ standings, Primat remains well aware of the challenge that lies ahead with the level of competition even higher in the premier BES category after the influx of entries this year. What’s more, the cars remain subject to changes in Balance of Performance terms, a set of rules and restrictions that aim to level the playing field amongst manufacturers.

“We’re feeling confident ahead of the first round at Monza after all the testing we’ve done over the past few weeks,” said Harold. “We’ve been able to work on the set-ups and fine-tune the Bentley to a level of preparation similar to last year, so the car seems to get better and better every time it takes to the track.

“I am delighted to have Mike and Vincent on board at HTP this year. I think we make a strong team, combining both pace and experience. Mike is a real professional and Vincent is a talented young driver who adapts very quickly. Personally, I am happy to take on more responsibility and help maintain stability within the team.

“It’s still too early to set any clear targets, but if we can show the same consistency as we did last year and regularly fight for top-five finishes then I think we could be right up there in the championship. However, I am preparing myself for an even bigger challenge after seeing the competitiveness of the field this year.

“Finally, my thoughts are with the spectator who lost their life at the Nurburgring last weekend and would like to offer my sincere condolences to their family and relatives.”