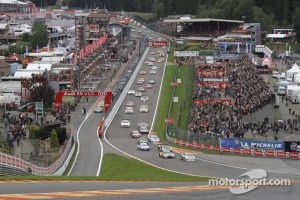 The marquee event of the Blancpain Endurance Series, the Total 24 Hours of Spa, will feature a record field of GT3 cars rumbling through the Belgian Ardennes from 26-29 July in pursuit of one of motorsport’s most coveted trophies.

In only its second year, the Blancpain Endurance Series has become an outstanding success with prestigious marques comprising grids of over 50 cars at the opening three rounds at Monza, Silverstone and Paul Ricard.

For the fourth instalment of the 2012 season, the series arrives at Spa-Francorchamps for the 12th running of the iconic Total 24 Hours of Spa in the GT era.

A demanding track layout which tests the mettle of man and machine, fickle weather and huge crowds entertained day and night, are all part of the event’s rich appeal.

The entry list for 2012 totals 67 cars – a record for cars of the same GT3 category – and unrivalled anywhere in the annals of GT sportscar history.

“But we have never before faced the prospect of such a magnificent grid, with what must be one of the largest fields ever of a single category of cars.

“The Blancpain Endurance Series, and the Total 24 Hours of Spa, are the proof of the amazing GT3 phenomenon, that has grown from an idea in 2005 to the grid entered for this fourth round of the 2012 season.

“With battle ongoing not only for victory in Spa, but for the 2012 title, I am sure that when the green light is given, and the cars set off up the Radillon, it will be the start of 24 thrilling hours of excitement and action.”

Marc A. Hayek, President & CEO of Blancpain, who will partner fellow former winners Dutchmen Peter Kox and Jos Menten in the Blancpain Reiter Lamborghini, is delighted to be part of the Spa spectacular once again.

“This second season confirms the great success of the Blancpain Endurance Series. It’s fantastic to see so many participants of such quality recognizing the effort of the organizers to revive the very essence of GT racing and looking forward to compete on the most prestigious European circuits,” he said.

“And this is particularly true for this fourth round in Spa-Francorchamps combining all the successful features of the Championship with one of the most iconic endurance races in the world. See you on the starting grid!”

Famous names are sprinkled among the entry list. For instance, former French Formula One driver Olivier Panis is paired with French international goalkeeper Fabien Barthez in one of the SOFREV ASP Ferrari 458 Italia entries.

Also with success from the French classic is Blundell who won the race in 1992 and Stephane Ortelli (Audi Sport Team WRT) who triumphed for Porsche in 1998.

Fässler and Ortelli are rare in having won both the Le Mans and Spa 24 Hours. Fässler won at Spa in 2007 in a Corvette, while Ortelli won the Belgian race for Porsche in 2003, and he lines up against many other Spa 24 Hour winners.

Andrea Bertolini (AF Corse) won in 2006 and 2008 in a Maserati MC12. Mike Hezemans (Marc VDS Racing Team) is also a double Spa 24 winner, having taken victory in 2007 and 2009, the latter year with Menten (Blancpain-Reiter) and Anthony Kumpen (KRK Racing) as co-drivers.

Kristensen is relishing the prospect of a debut in the Total 24 Hours of Spa. "Spa-Francorchamps will no doubt be a great experience,” he says. “The same applies at Spa as in Le Mans or in a mountain bike race – namely expect the unexpected.

“I can’t wait to see all the fans. This is an international event and it attracts plenty of fans from Belgium and also from neighbouring France, Holland and Germany.”

Audi Sport Team WRT are expected to mount a formidable defence of their 2011 title.

Christopher Mies, Haase and Ortelli arrive at Spa fresh from overall victory in the third round of the Blancpain Endurance Series at Paul Ricard.

PRO class leaders Marc VDS Racing lead a strong contingent of Belgians which includes 14 teams and no fewer than 28 drivers.

Maxime Martin, who along with Belgian compatriot Bas Leinders and Markus Palttala (FIN) in the Marc VDS BMW Z4, masterminded victory in the opening two rounds at Monza and Silverstone, is well aware of the challenges that lay ahead.

Martin, whose car set pole in 2011, said: “Spa is such a big challenge. The famous weather conditions and the number of cars on track make it such a difficult 24 hour race.

“For a Belgian team and a Belgian driver to win would be really special because it’s our home race. But I think that for any team and driver, it would be a fantastic win.

“We will fight for pole again but we know it will be really difficult. This year the win is a lot more important than the pole position.

“For sure, with five official cars, Audi will be very strong but I think that there are a lot of cars who can win. Porsche, Mercedes, BMW for example. I’ve done three 24-hour races this year so I’m quite prepared.”

The second Vantage is run by the British Beechdean outfit and has Aston Martin Racing Managing Director John Gaw on the driver roster.

The previous visit to Spa by Jaguar was the Tom Walkinshaw Racing XJS which took overall victory in 1984.

The Gentlemen Trophy class has 13 entries including the VDS Racing Adventures Ford Mustang.

There have been three different winners of the class to date in 2012 with championship leaders Sainteloc Racing Audi, set to challenge for honours with fellow Audi squad JB Motorsport, Kessel Racing Ferrari, the Exagon Engineering Porsche, winners at Paul Ricard and the awesome Bull Fight Racing/GCR Dodge Viper.

There are also three women on the entry list. Sarah Bovy (BEL) and Marlene Broggi (FRA) are together in a Boutsen Ginion Racing McLaren MP4-12C while Italy’s Michela Cerruti shares a Raol Motorsport BMW Z4 with Dutch star Tom Coronel among others.

Entertainment for the massive crowd expected is provided by headline act Faithless.

The event gets underway on Wednesday 25th July with the traditional race car parade from the circuit to the centre of Spa town where the cars and drivers will be on show on Place Royale. The venue is also the scene of the pre-event drivers’ briefing.

BES: Audi emerges unscathed in the battle of Le Castellet