First race and first win scored. There couldn’t be a better start for Davide Rigon and Kessel Racing Team, who powerfully scored a win at Monza International Circuit in the opening race of the Blancpain GT Endurance Series Championship. 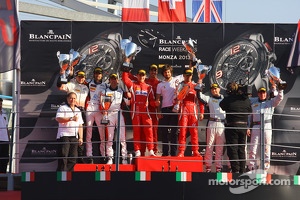 At the wheel of the Ferrari 458 Italia GT3 44, the talented driver, along with his team mates Ramos and Zampieri, dominated the race, crossing the line in the lead and leaving behind them 60 cars belonging to the most important car companies. After setting the second best time in the second stint of qualifying, Davide kicked off from the fourth row setting the eight time. The Ferrari driver straightaway moved up the standing and managed to lead just behind the podium, taking the lead of the race on the 30th lap. The “red” from Maranello n.44 was the fastest car on track and managed to set the fastest lap on 1.50.414. The pit-stop strategy and performance of the men in red was perfect, so Davide passed the baton to Ramos when he was in the lead. The Brazilian driver kept on being in the lead, before passing the baton to Zampieri who finished that stunning race.

Rigon managed to be back on the highest step of the podium, after that terrible accident occurred during the Turkish GP in 2011, when he broke his fibula and tibia and was embedded with 21 spikes in his left leg “Scoring a win again just two years after that terrible 2011 is fantastic. It was since the race in Adria in the SF championship that I didn’t enjoy that amazing feeling”, says Davide “The race was flawless, everything was perfect. We were so good at not making any mistake and the pit-stop staff was fantastic, as well. In comparison with past season, the team progressed a lot in this direction and the work done yielded results. We were always the fastest on track. This is the best way to start a season in such a competitive championship where so many cars are involved. I want to thank all the guys of the Kessel Team and my team mates Cesar and Daniel”, ended up the driver from Vicenza.

“It was a stunning weekend; it finished in the best way. Victory and fastest lap time on track. We were only a little bit penalised by the heavy traffic during qualifying. Davide took an amazing start, taking the lead of the race. Congratulations to Ramos, Zampieri and Kessel Team for all the work done. Pit-stop and strategy were both perfect. They did a great job improving the pit-stop strategy, which was the Achilles’ heel during the past season. It was important to get off to the right foot, considering that the championship is only made of 5 races. This outcome is a right reward for all the pain suffered by Davide since 2011,” says the manager Giovanni Minardi.