The third round of the 2014 Blancpain Endurance Series will be held at the French track of Paul Ricard. The race will start at 19.15 on Saturday June 28th and will run into the dark, with a finish at 22.15. It is the last three-hour race of the season, with the remaining two races of the 2014 Blancpain Endurance Series being the Total 24 Hours of Spa on July 26th-27th and the Nürburgring 1000 on September 21st.

It’s been a full month since the previous round of the Blancpain Endurance Series in Silverstone. The British race saw a historic win for the #7 M-Sport Bentley, but thanks to their second place the ART Grand Prix trio of Soucek-Estre-Korjus now lead the standings. Victory in Pro-Am went to the #80 Nissan GT Academy Team RJN Nissan, while in the Gentlemen Trophy the #458 GT Corse by Rinaldi Ferrari took its second win in as many races.


With the #98 ART Grand Prix McLaren winning in Monza and the #7 M-Sport Bentley in Silverstone, both the 2014 Blancpain Endurance Series races of 2014 have had different winners. 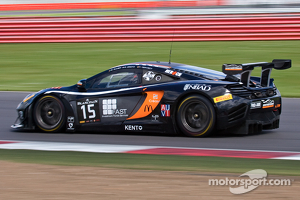 The differences between the cars and drivers are so small that we might well see a third different winner in the South of France. Keep an eye on championship leaders Kevin Korjus, Kevin Estre and Andy Soucek. After a third place in the opening round and a second in Silverstone, the drivers of the #99 ART Grand Prix McLaren would love to climb one more step on the rostrum, especially since the race at the Paul Ricard Circuit is the home race of the French ART Grand Prix squad. For the occasion ART can count on the services of Nicolas Lapierre. The Frenchman, third in the most recent edition of the Le Mans 24 Hours, will share the #98 car with Alvaro Parente and Grégoire Demoustier, replacing Alexandre Prémat.

Le Castellet is a home race for Saintéloc Racing as well. The French Audi team has had a wonderful start to the season, finishing second in Monza, and just missing out on the podium in the British round. A good result in Le Castellet would certainly add to their title chances, Saintéloc Racing being third in the current Pro team-standings, behind ART Grand Prix and M-Sport Bentley.


Last year the Paul Ricard round of the Blancpain Endurance Series saw a magnificent performance from the Boutsen Ginion duo Frederic Vervisch-David Dermont in the Pro-Am Cup. A repeat performance on the eve of the Total 24 Hours of Spa would be a great boost for the Belgian team. From Le Castellet onwards Boutsen Ginion will be joined by Kiwi single seater ace Chris van der Drift, who will be sharing the #16 McLaren with Lebanese drivers Alex Demirdjian and Shahan Sarkissian. Series Pro-Am Cup leader ROAL Motorsport will be looking for a third podium finish in a row, with Nissan GT Academy Team RJN and Scuderia Villorba Corse – second and third in the standings – aiming for their third top-5 finishes of the season.


With two wins in two races the #458 GT Corse by Rinaldi Ferrari-trio Pierre Ehret, Alexander Mattschull and Frank Schmikler will start as the big favourites in the Gentlemen Trophy. However, the Germans will have to deal with a strong French delegation however. There will be three more entries at Le Castellet, bringing the Gentlemen Trophy grid total to 11. The Belgian Audi Club Team WRT fields a second R8 LMS ultra, which will be driven by French trio Stephane Pourquie, Harry Teneketzian and Grégoire Chaix. The new Scuderia Villorba Corse Ferrari has the French duo Cedric Mezard and François Perrodo at the wheel, while French team Duqueine Engineering enters a Ferrari for the all-French line-up Gorini-Lanchere-Duqueine. In total, no fewer than 17 of the 32 Gentlemen Trophy drivers represent France.

The action at Le Castellet starts on Friday morning, with the Bronze Test at 9 am. Friday sees the Free Practice and Pre Qualifying Practice sessions as well, with the Qualifying session for the three-hour race taking place on Saturday morning at 11.20 am. Spectators will also be able to enjoy two races of the Lamborghini Blancpain Super Trofeo. After the race a Rooftop Party ends the Blancpain Endurance Series weekend at the Circuit Paul Ricard in style. In partnership with Radio Vitamine, DJ’s Kristof Tigran & Alan Master T will put the roof on fire, starting at 20h30 on Saturday evening.

Guy Smith (#7 M-Sport Bentley): “After the race at Silverstone we're all hungry for another success. We've continued our intensive training programme since the last round, and we're ready to race. Paul Ricard is a circuit where traction out of the slower corners is vital, and the Continental GT3 has really strong grip while also looking after its tyres, so we've got high hopes that we can be on the podium again.”

Frédéric Vervisch (#15 Boutsen Ginion McLaren): “There is no denying that we had a difficult start to the season, but a recent test session allowed us to make a lot of progress. I do not want to get my hopes up, but I am sure that the speed of our McLaren is back. We certainly have a lot of confidence in the car right now. Since I adore driving on the track of Le Castellet – the setting is quite unique – I think we might get among the frontrunners this time.”

Harry Teneketzian (#2 Belgian Audi Club Team WRT Audi): “We’re a bunch of friends out to have fun on the race track. That doesn’t mean that we don’t have any ambitions at the start of this race. We have all quite some racing experience and since our Audi is strong and very reliable we are aiming at a top-5 position. Or a podium finish, why not?”

What time and channel is the Homestead NASCAR race today?